Brumal – indicative of, occurring in or pertaining to winter; wintry.

Better to clean spouting before it rains

I was just thinking that if you’re got to have a rainy afternoon, Sunday isn’t a bad time to be having it when I heard my farmer say bother (or word to similar affect with a little more force).

I looked where he was looking and saw water pouring down the inside of the window. 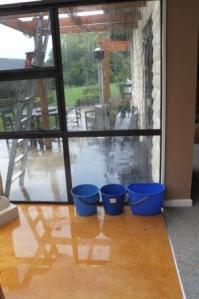 This isn’t the first time we’ve had a reminder that it’s better to clear the spouting before it rains and fortunately someone has already been home when it’s happened.

She is one of five people throughout the country to be awarded the $35,000 study grant.

The others include Meridian Energy national agribusiness manager Natasha King, from Christchurch, a daughter of Blenheim-based Kaikoura MP Colin King.

The Nuffield NZ Scholarship offers the opportunity for overseas travel and study.

Dr Harper, 37, who lives on Mahau Sound, is described as a rural entrepreneur.

She was the 2011 winner of the Rural Women Enterprising Woman Award and a finalist in the 2009 Cuisine Artisan Food Awards. She has a Masters in Business Management from Massey University, a PhD in plant pathology from Lincoln University and a science degree from Victoria University.  . .

During their heyday in the 1970s, there were 600 Chinese market gardeners in New Zealand, but now there are only 157.

Many young people watched their parents work hard in the market gardens and they became lawyers and doctors, choosing not to work like their parents, said the chief executive of the Dominion Federation of New Zealand Chinese Commercial Growers, Howe Young.

He was one of the speakers at the Palmerston North launch of two books last week: Sons of the Soil and Success Through Adversity.

Marlborough wineries Spy Valley Wines and Yealands Estate Wines have been named as two of the best South Island wine tourism ventures in the Best of Wine Tourism Awards.

Run by the Great Wine Capitals Global Network, the annual awards recognise outstanding wine tourism businesses in the South Island. The network is a group of wine regions from around the world which aims to promote wine tourism, education and business exchange. . .

The supreme irony of the UK Daily Mail’s headline, “Buy New Zealand lamb to save the planet,” is that it took a British newspaper to make mainstream media here, realise that our farms are pretty darn good. Another irony is that this is old news to Dr Jan Wright, the Parliamentary Commissioner for the Environment.

Speaking recently onTV3’s The Nation, Dr Wright helped to balance a myth farmers are exempt from the Emissions Trading Scheme (ETS). When she was asked about agriculture, the host, Rachel Smalley, appeared surprised by the response. “New Zealand is in an interesting position because half of our greenhouse gas emissions are from agriculture, which is unusual among developed countries, but I am actually less concerned about agriculture than I am than these heavy industrial emitters and that’s because the agricultural gases are different. It is difficult and there are challenges there…I say agriculture should come in but I don’t have the same problem being generous to it…”

Where Dr Wright and Federated Farmers diverge is the entry point for agriculture. But even she recognises that agriculture is not complacently sitting on its haunches.

Like mums and dads everywhere, farmers pay the ETS. Every time we fill up the tractor or turn on electric pumps, we pay. This also finds its way into the cost of a vet’s visit through to the price of number eight wire. The Parliamentary Commissioner for the Environment also knows that when my ewe ‘Jackson’ gave birth to quintuplets, nicknamed, the ‘Jackson Five,’ it was an efficiency that is a global good. . .

Colin King, past champion shearer, current MP, in action for a charity fundraiser:

The merino wether had three years’ wool and the fleece weighted 13.5kg. All funds raised went to the Nelson, Marlborough Helicopter Trust.

Kyoto is the past

Quote of the day from Climate Change Minister Tim Groser:

“Kyoto is the past”, he said. “The future rests on getting countries outside Kyoto to start doing something serious about climate change.”

He said it would be wrong to tie the hands of a future New Zealand government for eight years while a single new treaty is negotiated.

The Kyoto Protocol was the triumph of politics and bureaucracy over science and reason.

It was a lot more about being seen to do something than actually making a difference.

The best thing done to address climate change is not anything achieved through the ETS imposed under Kyoto but the  New Zealand-initiated Global Research Alliance on agriculture greenhouse gases.

Instead of the tax-it approach taken by Kyoto and its supporters this initiative brings countries together to find ways to increase food production while minimising emissions.

Kyoto and its supporters take a negative approach, the Global Alliance takes a positive one.

The facts are well known, a recently novel puts the human side of the horror and heroism. 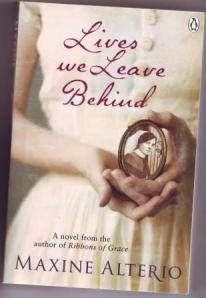 Lives We leave Behind by Maxine Alterio tells the story of New Zealand nurses Addie Harrington and Meg Dutton who serve in Egypt and France.

Historical details and the inclusion of some real names among the fictional characters helps adds to the feeling of authenticity.

The characters, what happens to them and how they react feel real and true to the time.

This is a herstory,  concentrating on the women, telling their stories in their words and helping us see what happened through their eyes.

It is a story of ordinary people dealing with extraordinary conditions and events without being either maudlin or saccharine.

Lives We leave Behind by Maxine Alterio, Penguin 2012: The author’s website is here.

Going to the reunion of someone else’s primary school wouldn’t normally make my list of enjoyable outings.

But when I’ve lived in the Enfield School’s catchment for nearly 30 years and know lots of the people who were going to it so was happy to accompany my farmer who is an ex-pupil to the reunion dinner.

The school opened in 1876 and closed a few years ago as a result of a declining roll.

This weekend’s reunion wasn’t to mark a particular anniversary, it was just to bring former pupils, staff and parents together and it was fun.

One of the ex-pupils, Wayne McNee, now heads the Ministry of Primary Industries.

He gave the toast to the school and did it well – lacing his speech with humour and keeping it short.

One of the messages he left us with was the way a teacher can influence a pupil’s life.

1215 – The Fourth Lateran Council met, defining the doctrine of transubstantiation, the process by which bread and wine are, by that doctrine, said to transform into the body and blood of Christ.

1500 – Treaty of Granada – Louis XII of France and Ferdinand II of Aragon agree to divide the Kingdom of Naples between them.

1620 – The Mayflower Compact was signed in what is now Provincetown Harbor near Cape Cod.

1634 – Following pressure from Anglican bishop John Atherton, the Irish House of Commons passed An Act for the Punishment for the Vice of Buggery.

1673 – Second Battle of Khotyn in Ukraine: Polish-Lithuanian Commonwealth forces under the command of Jan Sobieski defeated the Ottoman army. In this battle, rockets made by Kazimierz Siemienowicz were successfully used.

1675 – Gottfried Leibniz demonstrated integral calculus for the first time to find the area under the graph of y = ƒ(x).

1805 – Napoleonic Wars: Battle of Dürenstein – 8000 French troops attempted to slow the retreat of a vastly superior Russian and Austrian force.

1839 – The Virginia Military Institute was founded in Lexington.

1865 – Treaty of Sinchula was signed: Bhutan ceded areas east of the Teesta River to the British East India Company.

1869 – The Victorian Aboriginal Protection Act was enacted, giving the government control of indigenous people’s wages, their terms of employment, where they could live, and of their children, effectively leading to the Stolen Generations.

1887 – Construction of the Manchester Ship Canal began at Eastham.

1911 – Many cities in the Midwestern United States broke their record highs and lows on the same day as a strong cold front rolled through.

1918 – The signing of the Armistice between the Allies and Germany was celebrated in many cities and towns around New Zealand. Enthusiasm was dampened, though, by the ongoing impact of the influenza pandemic then ravaging the country. Germany signed an armistice agreement with the Allies in a railroad car outside Compiègne in France. The war officially ended at 11:00 (The eleventh hour of the eleventh day of the eleventh month).

1919 – The Centralia Massacre resulted in the deaths of four members of the American Legion and the lynching of a local leader of the Industrial Workers of the World.

1919 – Lāčplēša day – Latvian forces defeated the Freikorps at Riga in the Latvian War of Independence.

1921 – The Tomb of the Unknowns was dedicated by US President Warren G. Harding at Arlington National Cemetery.

1930 – Patent number US1781541 was awarded to Albert Einstein and Leó Szilárd for their invention, the Einstein refrigerator.

1934 – The Shrine of Remembrance in Melbourne was opened.

1940 – Battle of Taranto – The Royal Navy launched the first aircraft carrier strike in history, on the Italian fleet at Taranto.

1942 Trans tasman liner Awatea was attacked by swarms of German and Italian bombers. Although its gunners shot down several planes, the Awatea was set on fire and holed by torpedoes. Remarkably, everyone on board got off safely (except for the ship’s cat, which was apparently killed by a bomb blast).

1944 – Dr. jur. Erich Göstl, a member of the Waffen SS, was awarded the Knight’s Cross of the Iron Cross, to recognise extreme battlefield bravery, after losing his face and eyes during the Battle of Normandy.

1960 – A military coup against President Ngo Dinh Diem of South Vietnam was crushed.

1968 – A second republic was declared in the Maldives.

1992 – The General Synod of the Church of England voted to allow women to become priests.

2000 – In Kaprun, Austria, 155 skiers and snowboarders died when a cable car caught fire in an alpine tunnel.

2001 – Journalists Pierre Billaud, Johanne Sutton and Volker Handloik were killed in Afghanistan during an attack on the convoy they are traveling in.

2004 – New Zealand Tomb of the Unknown Warrior was dedicated at the National War Memorial, Wellington.

2004 – The Palestine Liberation Organization confirmed the death of Yasser Arafat from unidentified causes. Mahmoud Abbas was elected chairman of the PLO minutes later.