Two new polls have affirmed a moderate downward trend in National’s support since July — but only to a still-high level of support at which to govern it would need, at most, support from ACT’s and United Future’s single electorate seats. National’s latest four-poll average was 48.4%.

Labour looks to be troughing. But it also appeared to have troughed in July, only to drop again in early August. Its latest average was 26.2%, below its whole-of-2014 average of 28.8%.

The polls in the latest four-poll average were all taken after Nicky Hager’s Dirty Politics book was launched on August 13 but before Judith Collins’ sudden resignation on 30 August. The latest midpoint between the start and finish of interviewing was 25 August.

Amidst all this, the Greens held steady at a 12.5% average, which would net it 16 seats, half of the total Labour could expect on its reading. 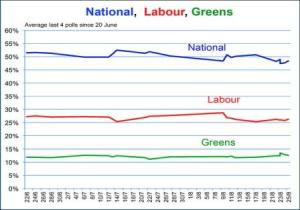 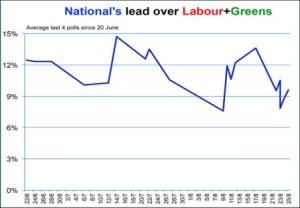 The two winners from the fallout from National and Labour have been New Zealand First, average 5.2%, and the Conservatives, average 3.1%, both slightly down from recent peaks. Internet-Mana was 2.6%, the Maori party 0.9% (not enough to bring in additional seats to Te Ururoa Flavell’s electorate seat unless other candidates win electorate seats), ACT 0.4% and United Future 0.2%.

The Maori Party has voted with the opposition more than the government. But given the choice of working with a National-led government of propping up a Labour/Green/NZ First/ Internet/Mana one it is almost certain to opt for stability and certainty rather than instability.

She’s also calling on Labour to do a deal for her – in the Maori seat of Waiariki.

Labour is denying the claim however, saying all seat deals are off.

Internet Mana is an unusual political beast, but whether you think it’s a roadshow or sideshow – it’s Parliament-bound on Mr Harawira’s coattails.

The Veteran, at No Minister, says Labour’s conspicuous by its absence in Te Tai Tokerau, indicating it’s conceded the seat to sitting MP and Mana leader Hone Harawira.

David Cunliffe’s refusal to rule Internet-Mana out of a government he leads has  torpedoed Kelvin Davis’s chances of winning Te Tai Tokerau.

Whether or not there’s a formal deal, that is effectively an electoral accommodation Harawira.

Sykes can’t be blamed for asking for a deal in Waiariki too, if only because asking is getting her publicity she’d otherwise struggle for.

The Representation Commission has proposed no changes to the boundaries of the seven Maori electorates, because they are within their population quota.

Mr Flavell says it does not address the ”ridiculous” situation that the Tai Tonga MP is expected to represent over half of the land area of Aotearoa, which spans 18 general electorates.

He says the size of the Maori electorates is a major problem it has discussed with the Electoral Commission and MPs, but says there is no political will to change it.

He’s right about  Te Tai Tonga which covers 161, 443 square kilometres – that’s the whole of the South and Stewart Islands and part of Wellington Region.

But the next biggest seats are general ones. Clutha Southland covers 38,247 sq kms and West Coast Tasman covers 38, 042 sq kms.

Mr Flavell says electoral law guarantees there will be at least 16 general electorates in the South Island so each one won’t be too big, and that approach should apply to Maori electorates.

The law actually says there will be 16 South Island seats and two of  those – Clutha Southland and West-Coast Tasman are bigger than all but Te Tai Tonga, Waitaki is bigger than all but that and Te Tai Hauauru ; Kaikoura is bigger than Waiariki and Te Tai Tokerau and the three biggest North island seats East Coast, Taranaki-King Country and Northland are all bigger than Hauraki-Waikato.
Electorate sizes are determined by dividing the South Island population by 16 with a tolerance of 5% over or under that figure.I agree that most Maori seats are too big but so are some of the general ones. MMP gives better representation to parties but bigger electorates provides poorer representation for people.The simplest way to reduce the area electorates cover is to increase the number of seats but that would require more MPs or reduce the number of list seats and so reduce proportionality which is one of MMP’s strengths.Another way to reduce the area MPs have to service is to get rid of Maori electorates and keep the total number of seats we have now. That would add a seat in the South Island and make all electorates a bit smaller but I don’t think that will get any support from Flavell.

Maori are being canvassed to register on either the general or Maori roll.

If they’re in Te Tai Tokerau and want decent representation they should be opting for the general roll because their MP, Hone Harawira, is a rare sight in parliament.

Mana Party leader has been absent for 49 of the 120 sitting days since the 2011 election.

Mana leader Hone Harawira described himself as going “to battle for those without a voice in Parliament” at his party’s conference this month but he has been a rare sight in Parliament this year. . . .

Speaker David Carter said a formal attendance record for MPs was no longer kept, but Mr Harawira had been given 49 days of leave since the 2011 election, during which Parliament has sat for about 120 days. Party leaders have more responsibilities than other MPs, but most, including Prime Minister John Key and Labour leader David Shearer, attend on two of the three sitting days. . .

Most Maori seats are considerably bigger than the average general seat which means even a very good MP would struggle to service the electorate well.

However, Harawira has the second smallest Maori seat so can’t use electorate size as an excuse.

A party leader does have other duties but if the Prime Minister and Leader of the Opposition generally make it to two of the three sitting days each week, Harawira can’t use that as an excuse either.

Although he is costing us more than any other MP who isn’t a minister:

Despite the cutback in travel to Wellington, Mr Harawira’s travel expenses for the first three months of the year were still higher than any other non-ministerial MP, including Mr Shearer.

One of the unfortunate consequences of MMP is the larger area of electorates. The difficulty and added expense of servicing them has not been recognised by extra resources for their MPs.
However, thanks to one of the clauses in the agreement between National and the Maori Party  that will change.

All Maori MPs and all MPs in general seats which cover an area greater than 20,000 square kilometres will be entitled to an extra staff member, equivalent to three full time out of parliament staffers.

The Electorates which will benefit from this are:

The area the bigger ones cover definitely justifies more help. But there are 21 general electorates which cover bigger areas than Tamaki Makaurau.

That raises the question of why an electorate covering a relatively small area of 730 square kilometres needs an extra staff member if these, which are bigger, don’t: