In recognition of my tartan genes :

November 30 is also celebrated as the name day for people named for Saint Andrew, apropos of which, happy name day Andrei.

St Andrew is probably best known as the patron saint of Scotland.

He’s also the saint of:

Greece, Russia, Italy’s Amalfi and Barbados. As well as other countries, he’s the patront saint of singers, spinsters, maidens, fishmongers, fishermen, women wanting to be mothers, gout and sore throats. St Andrew is also the patron saint of the Order of the Thistle, one of the highest ranks of chivalry in the world, second only to the Order of the Garter. . . 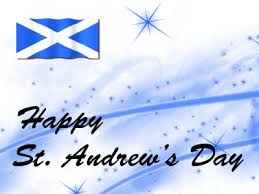 A change from the older Scottish songs I choose to celebrate St Andrew’s Day, I’m Gonna Be (500 Miles) by The Proclaimers:

Happy St Andrew’s Day to all Scots and those like me with tartan blood.

One of our uncles gave us a record player when my brothers and I were kids and a whole lot of 78s among which was one with Andy Stewart singing Donald Where’s Your Troosers?

Happy name day to Andrei too.

My father and my maternal forbears were all Scottish.

In memory of them and for everyone else with tartan genes who celebrates St Andrew’s Day:

P.S. And for Andrei, whose name day it is and who I know appreciates and knows a lot about music, though I’m not sure if that extends to the pipes.

You can find 10 more facts about him here

In recognition of my tartan genes and in memory of my father who would have been 99 a couple of weeks ago, here’s Scotland the Brave:

P.S. While searching YouTube for a clip to post I came across this one of the Black Watch march past in Dundee, which was Dad’s home town, and on another clip this comment:

We’ll play the bagpipes until the english love ’em!

In honour of St Andrew’s Day and in memory of my father who was a Scottish soldier (20th Batallion NZEF) and would have been 98 a couple of weeks ago:

Andrei  noted  last year that Andrew is also patron saint of Russia & the Ukraine and that today is his (Andrei’s) name day. (and because I usually post a music video for singers who have a birthday today but a quick trawl through YouTube for something from Billy Idol came up with nothing I liked).

The appeal of whisky escapes me and I’m not very keen on porridge.

But it’s St Andrew’s Day and I’ve got tartan genes which require me to acknowledge Scotland’s patron saint and the country’s national day.

If there’s such a thing as genetic memory, it kicked in when we got to Scotland eight years ago.

It wasn’t a feeling of coming home, that’s definitely New Zealand, but there was a sense of familiarity and recognition.

The prosaic explanation for this could be similarities in the landscape which made me realise why the Scots felt at home in the southern South Island. But the romantic in me put the sense of connection down to the knowledge that this was the land from which my forbears came.

My mother’s grandfather and all her great grandparents were Scottish. My father was born and brought up there and although he moved to New Zealand in his late 20s and spent nearly three quarters of his life here and loved the land he chose, he also retained a close affinity to the land of his birth.

In many ways he became more Scottish as he aged. The kilt which was worn only when he went to Scottish Country Dancing when my brother and I were children, became a staple part of his wardrobe and his clothing of choice for semi formal and formal occasions. Even now, nearly nine years after his death I meet people who tell me they remember Charlie in his kilt, greeting them at the church door on Sundays or addressing the haggis on Burns night.

For all the great inventions and distinguished people that have come out of Scotland, St Andrew’s Day doesn’t get the recognition that St Patrick’s Day does. While I’m quite happy that it hasn’t been commercialised my tarten genes called for a post in recognition of Scotland’s patron saint.