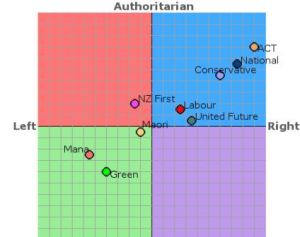 Whoever is behind it says:

This time around there can be no more important and over-arching issue than the secretive Trans-Pacific Partnership Agreement (TPPA) which New Zealand is poised to sign, yet receives scant attention in the campaign and is ignored in any of the “surveys” that we’ve seen. From the authenticated leaked information that’s available, it’s clear that this agreement is much more than the free trade deal that its National Party adherents describe. It is in fact an unprecedented move towards international corporate involvement in governance, including vital areas like education, health and pharmaceuticals, environment, agriculture, investor rights and much more. Under the TPPA, government legislation in the interests of the public — but against the interests of foreign business — may be challenged by a corporation in a closed tribunal on the grounds of impeding free trade. This precise thing has already happened in Australia, where the country’s plain packaging laws on tobacco were legally challenged by a tobacco company. The truth is that many of the electoral policies of some NZ parties could not be implemented under the TPPA! This, and not the flag, is the real sovereignty issue, and it\`s barely being raised. By comparison, every other electoral issue is window dressing.

I don’t think most voters share this view of the importance of the TPPA, nor what appears to be a hard-left, anti-trade view of it.

However they are right about this:

We remain perplexed about the electoral alliance between Mana and the Internet Party, given that Mana’s leader is an avowed socialist, while the Internet Party’s founder is an economic libertarian in the mould of the anti-state Pirate parties of other countries. . .

I took the test:

That isolates me from any of the parties but I think that’s the fault of the placing of the parties, the questions – some of which are on issues and ideas which aren’t relevant here – and assumptions made about how answers relate to the parties.

TVNZ’s Vote Compass shouldn’t be taken as fool-proof, but it has the parties better placed and is based on questions more relevant in New Zealand.

It put me in a similar place but has the National Party there as more centrists and liberal than the Political Compass does:

TVNZ has a Vote Compass to help people work out where they fit on the political spectrum:

ONE News is hosting Vote Compass – an interactive online tool allowing voters to engage with public policy in a way they’ve never done before.

TVNZ’s Head of News and Current Affairs, John Gillespie, explains: “We want to help people connect with the issues that matter to them this election, and Vote Compass is a really empowering and engaging way to do that. It puts the power in voters’ hands, so they can get a clear picture of how their views match with the different parties.”

Visit onenews.co.nz/votecompass and give your views on a range of policy areas.

Once you’ve finished, Vote Compass compares your answers with the policy positions of the parties then displays your position on a grid, showing where you stand in the overall political landscape. If you wish, you can choose to share your results page on social media. Your results may surprise you!

ONE News will take this anonymous data as a snapshot, to identify the key policy issues that matter to New Zealand voters then report the findings as part of our overall election coverage.

Vote Compass was developed by political scientists from the University of Toronto in Canada. It is an independent, non-partisan initiative operated by university researchers and data scientists. They have worked together with a group of New Zealand academic advisers and ONE News to create a database of key political issues, based on an analysis of the party platforms, leading news sources and public input via social media.

ONE News also asked viewers on-air and online what issues they were interested in hearing more about in the lead up to the election. These responses have helped form some of the questions that make up the survey. . .

You can try it out here.

National MP Maurice Williamson was at a meeting in Mosgiel yesterday and in explaining that we don’t get multiple votes to cover individual issues mentioned that even Keith Holyoake admitted to being in agreement with 80% of National’s policies. That puts me  good company with 82% in agreement with National.

This is similar to the result I got on the Australian version and this NZ one too.

This TVNZ Vote Compass has given me a far more accurate result than One The Fence.

Probably because Vote Compass allows you to answer on a spectrum rather than the more binary approach of OTF.

Hat tip: The Polly Jar, a welcome addition to rational discussion on the blogosphere.