You can get carried away by the commercialism, ignore it, or focus on what really matters – true love that, in Shakespeare’s words, alters not when it alteration find. 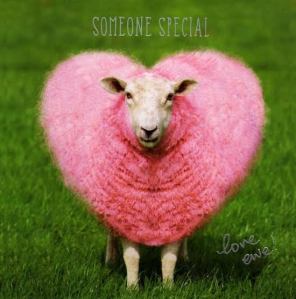 And love and laughter to moo too.

A man wanted Valentine’s Day to be special, so he bought a bottle of absinthe and stopped by the florist’s to order a bouquet of his wife’s favorite flower: white anemones.

Unfortunately, the florist was sold out of flowers and had only a few stems of feathery ferns.

The man asked the florist to make a bouquet out of the ferns and the flask of liquor. He added a card and proceeded home.

After a romantic candlelight dinner, he presented his wife with the gift.

She opened the card to read, “Absinthe makes the heart grow fonder.”

With a tear in her eye, she whispered to him lovingly, “Yes, and with fronds like these, who needs anemones.”

Valentine’s Day can be crassly commercial.

It can, if you so choose, be a reminder and celebration of the wonder of love apropos of which is this thought:

There are people who believe we stand alone, whole & complete & perhaps that’s true, but all I know is there are parts of me that would not be if they had not come alive with you….  – © 2014 Brian Andreas – posted with permission.

My farmer says it’s better to know you’re loved every day and not just on a few special occasions in a year and he means it.

That doesn’t stop him marking the odd special occasion and on Friday he came home with a beautiful bunch of flowers in anticipation of today.

Today I’m grateful for romantic gestures and the love which comes with them.

Mr Blewden says around 50 percent of the roses sold each year for Valentine’s Day are now imported.

Not only is this affecting Kiwi growers’ livelihoods, it also poses biosecurity risks, he says.

Any imports pose biosecurity risks but MPI has strict protocols to deal with them.

“Imported flowers are usually treated with harsh chemicals like Round Up. This means they don’t last long once you’ve bought them and you have to be careful when handling them if you are sensitive to chemicals.

Any flowers treated with Round Up would be dead.

“But sometimes imported flowers slip through the cracks, don’t get treated properly and come into NZ carrying pests and diseases. We’ve had several instances of this and the risks to our industry, and to home gardeners, are huge.”

The discovery of a single Queensland fruit fly got major attention a couple of weeks ago. Any pests or diseases on imported flowers would be treated as seriously but I don’t recall any news of one.

He says New Zealanders buy approximately 600,000 rose stems for Valentine’s Day and by far the majority are romantic red.

But Kiwi growers account for only about 300,000 rose stems destined for Valentine’s Day. The balance – another 300,000 stems sold for February 14 – comes into the country from India.

“Import volumes are growing each year because stems are massed produced overseas very cheaply. This is putting our local industry under severe pressure.

“Unfortunately, consumers don’t know that most of the roses they buy are imports. Perhaps if they did they’d ask their florist for NZ-grown stems. They’d certainly last longer and be of better quality when you got them home.” . . .

People base their buying on several factors including cost and quality.

Flower prices soar on Valentine’s Day. Some people might prefer to pay a higher price for local blooms but I suspect many would sacrifice quality and longevity for a lower price.

That’s what free trade does and as many of the growers will be exporters they can’t argue for any special treatment here without endangering their sales elsewhere.

While on the subject of Valentine’s Day, it’s also my birthday.

On my 40th our accountant had stayed the night and presented me with a gift at breakfast. Minutes later my best friend’s mother arrived out from town with a present.

My farmer muttered that they were showing him up and disappeared into the office.

I learned later he phoned a friend who’s a florist and asked for 40 red roses. She pointed out it was Valentine’s day and they would be very pricey.

He said that didn’t matter. She told him what it would cost, he changed his mind and asked about carnations. They were a similar price so he told her he’d call in later and see what she could come up with.

She came up with a beautiful bunch of mixed blooms, the cost of which remains between them and their country of origin never crossed my mind.

Some relationship advice for Valentine’s Day:

Positivity is infectious and it can work for single people too.

A friend had been through a particularly difficult patch with a marriage break-up and family deaths.

Another friend suggested that no matter how bad a day she had it would help if, last thing at night, she though of one good thing that had happened in her day.

Her first thought was that there weren’t any bright spots to reflect on in her days but when she was driving home she rounded a corner and saw a flock of lambs gambolling and as close to grinning at the fun of it as lambs can get.

She grinned too, tucked the memory away to bring out last thing that night and has made a habit of making her last thought a reflection on the day’s bright spot ever since.

Enjoy the flowers, chocolates, teddy bears, jewellery, perfume, intimate dinner, picnic or whatever other display of  affection someone special wants to shower on you.

I’m not going to rain on anyone else’s romantic parade but nor am I going to buy into the commercial hype that now surrounds Valentine’s Day.

As my farmer keeps reminding me, it’s better to know you’re loved every day than to receive tokens  once a year.

It matters not that he does this with more than a little self-interest because Valentine’s Day is also my birthday so he gets out of a double expense.

Love every day is worth celebrating and to be treasured.

Valentines Day round up

He may say – and believe – it’s better to know you’re loved every day than just once a year – but Valentines Day is also my birthday and my farmer gave me a beautiful bunch of flowers.

Over at In A Strange Land, Deborah writes about doing it right.

Cactus Kate had computer problems but got flowers from a mystery man.

Andrei makes up for the lack of a duet in my list of top 10 (11) love songs with My Kind of Woman My Kind of Man.

And Quote Unquote has a bitter-sweet Valentine’s Day.

Apropos of Valentines Day my top 10 love songs (in no particular order) are:

* The First Time Ever I Saw Your Face.

* Killg Me Softly With His Song.

* Love Is All Around.

Valentine’s Day doesn’t have to be commercial – updated

Year by year the commercial hype around Valentine’s Day – and all the other days which have joined the calendar of celebrations – increases.

But it doesn’t have to be that way, you can show the one you love that you love him/her without spending a cent.

Apropos of the day Quote Unquote displays a fractual Valentine, Monkeywithtypewriter has a history lesson, The Hand Mirror talks about the tempest   and the suckiness  , Bitsonthe side has uncovered a chocolate shrinkage  in sweets and if it’s Cactus Kate you’re trying to impress, don’t do it by text.

Anti-Dismal has found 20 reasons it’s okay to hate Valentines Day and reckons it’s better to just give money. While not averse to receiving money, giving love has greater value at no cost 🙂

Tomorrow is Valentine’s Day so this Friday’s poem had to be a love one.

I Love You, by Roy Croft comes from Poems and Readings for Weddings edited by Julie Watson, published by Penguin.

Not only for what you are,

But for what I am

When I am with you.

Not only for what

You have made of yourself,

You are making of me.

For the part of me

That you bring out;

For putting your hand

Into my heaped-up heart

All the foolish, weak things

That you can’t help

And for drawing out

All the beautiful belongings

That no one else had looked

Quite hard enough to find.

I love you because you

Are helping me to make

Of the lumber of my life

Our of the works

Or my every day

Because you have done

More than any creed

To make me good,

And more than any fate

To make me happy.

You have done it

You have done it

Perhaps that is what

Being a friend means

I’ve been double tagged – first by MandM then by Keeping Stock so I have to:

*  Link to the person who tagged you

So here’s the seven random/weird facts:

2. My longest friendship is older than my memory – which isn’t a sad reflection on the state of my memory, we met when her family moved next door to mine when we were both two.

3. I lived on Great Mercury Island for a year – employed by Michael Fay & David Richwhite, who own the island, to supervise the correspondence school lessons of the farm manager’s three children.

5. I lived for three months in Vejer de la Frontera.

6. Most people call me Ele which is a contraction of my name – Elspeth, the Scottish form of Elizabeth.

7. We hosted an AFS student from Argentina and his family is now our family.

And an eighth: I never pass on anything resembling a chain letter and as this could be construed as such I’m tagging the following people as a tribute to their blogs but won’t be at all offended if they don’t want to play the game:

Art and My Life

Something Should Go Here