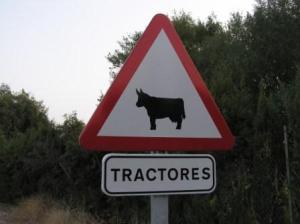 When the TradeMe auction for the International 574 Tractor and free farm closed on Sunday night, vendors Shelley and Allan Holland thought they had a deal for $250, 000.

Yesterday the man who placed the highest bid, pulled out because his bank wouldn’t finance the deal.

Who would make an agreement to spend a quarter of a million dollars, with the eyes of the world on them, without checking with their bank first?

Perhaps that was in the days when a deal was a deal and could be sealed with a handshake.

The Hollands took a gamble and gained worldwide interest because they took a risk and undertook to respond to everyone who asked a question or comment.

They also undertook to donate $10,000 from the sale to charity and their concern when the deal collapsed wasn’t for themselves but those they’d wanted to help.

It’s not just us. We’ve still got our land, we’re no worse off than where we started … but it’s all the people that we promised money to. We wanted to give $10,000 to some people that we thought really deserved it because people had been so overwhelming with the auction and we had such an incredible response.”

“And now what do we do? We are just absolutely gutted – totally and utterly gutted.”

The couple was disappointed for people they had offered to support out of their earnings, including one boy named Ollie whose plight had come up in the question-and-answer section of the auction. Ollie needs medical treatment in the United States.

TradeMe contacted other bidders informing them the sale had falled through and there’s a message on the sale page saying this item was sold to another member.

I hope it was for a sum close to the closing bid.

When Shelley and Allan Holland put their International 574 tractor on TradeMe with their 8 hectare Catlins farm thrown in for free and just a $1 reserve they were taking a gamble.

But thanks to the publicity generated by the novelty of the auction and their dedication to responding to the thousands of questions and comments, the gamble paid off.

Bidding on the International 574 tractor for sale on TradeMe has passed the QV for the farm which comes with it for free.

It has attracted 298,522 views and TradeMe is donating their fee to charity.

The auction has attracted 229054 views – and climbing by the second. It’s also helping a young boy who suffers from a rare medical condition.

His mother tried to auction a section on TradeMe but the auction was pulled. She then left a comment about this on the ask-a-seller for the tractor auction:

Good Luck – Trade Me pulled my listing similar to this – I was trying to fund raise for my son’s medical treatment in America and did an auction with a buy now that would include some land by the beach – its listed on Trade me so i had already paid the real estate listing fee – but they wouldn’t allow it – Hope you get what you need for the land.

Still fundraising – relisted my auction (218925767) without the land bit – was tempted after seeing how successful this one is going – but I live rurally and Trade Me is how I get by when i can’t get into the City to get what I need… so better not annoy them.

Someone then asked for a bank account so they could donate money and it’s turned into a fundraiser to help pay for the enzyme repalcement therapy her son needs.

Jim Mora’s panel interviewed his mother yesterday (a bit more than half way through part 1).

Bidding on the tractor for sale on TradeMe  has reached 232,632.

That’s a couple of thousand more than the top bid yesterday morning.

The auction has attracted 162,793 views. It closes this Sunday evening.

The auction has attracted world-wide interest and the vendors have opted to reply to every question and comment. As I write, there have been 132,168 page views, which I think is a TradeMe record.