Friends from the North Island came to stay with us yesterday.

We took them to dine at Fleurs Place last night where we experienced the usual warm and efficient service, delicious food and a magical sunset.

This morning we wandered round Oamaru’s historic precinct, taking in a visit to Steampunk HQ  which now features an infinity portal.

Oamaru used to be the town you had to crawl through on State Highway 1 on the way from somewhere to somewhere else. Now it’s a destination.

Seven Sharp made it New Zealand’s sharpest town, Lonely Planet dubbed it the coolest town in the country a view echoed by travel writers with gems like Pen-y-bryn which featured on Kiwi Living this week.

Seeing the town through the eyes of visitors today reawakened us to its charms for all of which I’m grateful.

North Otago didn’t used to feature on many people’s tourist itineraries and Oamaru was once just another town to crawl through for people driving on State Highway 1.

But the growing popularity of the little blue penguins which nest around the harbour, the town’s stunning old (by New Zealand standards) buildings and its Victorian precinct and becoming the country’s Steampunk capital  started attracting more visitors.

Oamaru was dubbed New Zealand’s coolest town by Lonely Planet which has helped attract more visitors and help locals appreciate what we have on our doorstep.

Visitors’ appreciation isn’t confined to the town and exploration of the wider district has been boosted by the development of the Alps 2 Ocean (A2O) cycleway which has been recognised as one of the world’s leading attractions:

North Otago’s Alps 2 Ocean Cycle Trail has made it on to a list of the world’s best destinations in 2016 by travel publishers Frommer’s.

The trail runs from Aoraki-Mt Cook to the coastal town of Oamaru in North Otago.

Being named as one of 16 of the “Best Places to Go” in the world in 2016 is priceless marketing and “something that the whole region should be really proud of”, Tourism Waitaki general manager Jason Gaskill says.

“It’ll be an amazing thing for the trail,” Mr Gaskill said.

Frommer’s describes the trail as ‘‘stunning and cheerfully hospitable” and starting the trail at Aoraki-Mt Cook “sets a perfect standard for awesome”.

“Your local hosts along the trail are happy to greet you and warmly organise food and lodging – after all, they pitched in to create this route for tourists – so come meet them under wide landscapes and huge skies… before the hordes find their way here,” the Frommer’s website said.

The Alps 2 Ocean Cycle Trail is the only New Zealand attraction to feature on the list and appears alongside destinations including Shanghai, Abu Dhabi and Mongolia. . .

The A2O isn’t finished yet but is already bringing lots of visitors and providing business opportunities for people servicing and selling to tourists.

Tourism is broadening the district’s economy, lessening its reliance of agriculture and it’s opening the eyes of locals to the many charms of our home patch.

Today I’m grateful for visitors who appreciate what we’ve got and help us appreciate it to.

P.S. The Frommer’s Best Places to Go list is here.

Things to do in Oamaru – Steampunk

Oamaru is New Zealand’s steampunk capital and a highlight of any visit to the town is Steampunk HQ. 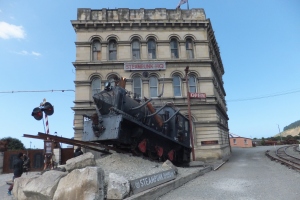 Steampunk is a quirky and fun genre of science fiction that features steam-powered technology. It is often set in an alternate, futuristic version of 19th century Victorian England.

The Steampunk future is driven by unusual steam powered devices – the ‘world gone mad’ as Victorian people may have imagined it. Examples are machines like those in the writing of H. G. Wells and Jules Verne, and in tv shows such as Dr. Who.

Oamaru is an ideal setting for Steampunk art and activities, given the wonderfully preserved and thriving Victorian buildings.

The building was originally called Meeks Grain Elevator and was built in 1883 from designs by Architects Forrester and Lemon for the grain traders and millers J. & T. Meek. Oamaru was at that time a flourishing sea port, and bigger than Los Angeles.

The five storey building was the only one of its kind in the southern hemisphere at the time. In 1920 the top two storeys were destroyed in a spectacular fire.

Steampunk HQ, which opened in November 2011, is an art collaboration proudly based in Oamaru, New Zealand. It sets out to portray an industrial version of steampunk, with a giant sense of humour and larger than life visions of an off the wall steampunk universe. Steampunk HQ is well known for its full scale train engine that spits fire and billows smoke The Lonely Planet Guide rates Steampunk HQ as one of NZ’s best new tourist attractions.

. . . In this cultural display of art, fashion and sculpture, one man’s trash is literally another’s treasure.

Steampunkers reconstitute the familiar into the weird and wonderful in a bid to create an alternate dimension.

Peculiar contraptions hiss and pop as they send you kicking and screaming into warp speed, destined for worlds far beyond our comprehension.

Mayan counters track the passing of time and predict the end of the world as we know it, subliminal messaging interrupts rational thought and radio waves bounce around your brain, feeding you messages from the other side.

The fashions incorporate fabric and object without prejudice.

Merging the line between form and function these alluring designs adorn the colourful characters who call the world of Steampunk home. . .

If your curiosity allows I highly recommend taking a trip into this neo industrialised fantasy world.

As you explore the dimly lit curiosities of Steampunk HQ you are transported into another dimension.

One of unexplainable sights and sounds.

80’s computers emit puffs of smoke as they dial out to connect with the either, steam powered portals spring into life as they sync with alternate dimensions, the creative remnants of previous inhabitants litter the floor, light bulbs flicker and the sound of static fills the air.

A loud rhythmic ticking keeps the ensemble in time. . .

Steampunk HQ is at the norththern end of Oamaru’s historic precinct.

Steampunk also provided the theme for the playground to the south of the precinct over the road from Friendly Bay.

A steampunk- themed café is about to open nearby too.

The annual steampunk festival held in June attracts a growing number of visitors, among whom last year was Curious Kiwi.  Follow that link for words and pictures.

This is one of an irregular series of posts on things to see and do in Oamaru and the Waitaki District.

You’re welcome to add your ideas for visitors to this area o further afield.

Oamaru used to be regarded as a boring little town most notable for the ribbon development which was an irritant for travellers passing through from north or south.

The ribbon development is still there, and goes further, but the discovery of its Victorian heritage and the artists,  artisans and other entrepreneurs who have settled there means it is now anything but boring.

One of the town’s more recent claims to fame is that it is the nation’s steampunk capital.

Steampunk is tomorrow as it used to be, a mixture of history, art, engineering, imagination and a sense of humour.

We’ve often taken visitors to play with the train outside Steampunk HQ. 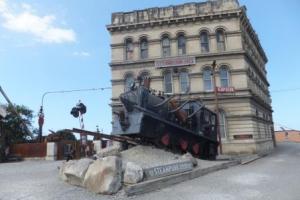 But yesterday was the first time I’d ventured inside: 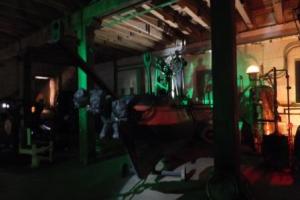 Don Paterson, Gillies Manufacturing’s Artist in residence,  and Kano have an exhibition of bronze sculptures and paintings in the reception at the moment, entitled Mythos.

And when you’ve had enough of looking you can adjourn to the steampunk-themed playground at the harbour near-by. 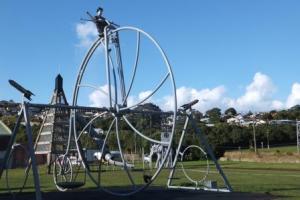 We were in Canada a couple of weeks ago when a local asked us where we lived.

He said, near Oamaru.

Another young woman walking past overheard and said, “Oamaru, that’s where the penguins are, I loved Oamaru.”

It’s lovely when people like your place, it’s even better when they tell the world as Dustin Main did:

If you’re a small town that isn’t marked on the road map with a giant star to draw in the tourists, you have your work cut out for you.  However, if you’re a town in New Zealand, you probably have an imaginative idea to draw people in.  In Nelson, they have the “World of Wearable Art and Classic Cars Musuem” (really).  In Oamaru, they have Steampunk HQ.

If you’re unfamiliar with the idea of “steampunk,” you can think of it as a mix between the old Victorian steam-powered era, mixed with a polished futuristic style.  It’s part sci-fi, part fantasy.

Steampunk HQ is what you get when you gather a bunch of artists in one small town who like to weld large pieces of metal together to make some cool art.  That art manifests itself as runaway steam-powered trains about to launch off of the tracks, blimps taking to the skies, and a skeleton riding a crazy tractor.  And that’s just the start of it. . .

You can read more about Steampunk here and  here.

And more about the penguins here.