“We’re not pushing for any further state funding, I think most taxpayers would feel that political parties should raise their own money to push their own messages.” Prime Minister John Key.

He was responding to the news that Labour will be discussing a proposal for the state funding for political parties at this weekend’s conference.

Democracy requires participation which means more than just turning up to vote every three years.

Healthy democracies have strong parties and the strength comes from the involvement and commitment of members and part of that commitment is financial either through donations or fund raising.

In #gigatownoamaru we’re doing our best to become the Southern Hemisphere’s fastest town through community involvement without state funding.

Whose money is it anyway?

I won’t be quite as blunt as Whaleoil nor as comprehensive in my critique as Kiwiblog.

But the suggestion of more public funding for political parties is one I’ll oppose vehemently.

Public funding makes it sound like it’s someone else’s money.

But public money is our money, taken from us in taxes to be used for the public good.

That’s things like health and welfare services, education and roads. It’s not groups of people who voluntarily come together in the hope of changing the world, or a small part of it.

In New Zealand we have a very low hurdle for membership to allow a group to register as a political party – just 500 people.

No other group which is so unrepresentative could justify tax payer funding to make its voice heard and there’s no reason to make a special case for political parties.

What does this mean?

I’m a sucker for quizes so I followed the link from In a Strange Land  to the MMP quiz.

I scored 8/9 (missed the one on the last date you can enrol for a general election). That put me above the average of 5.5/9 and encouraged by that I went on to the advanced quiz.

I got one wrong there too. It was:

Registered parties receive state campaign funding based largely on their success at the previous election.

Please tell me that refers only to the allocation of broadcasting funding and that full state funding hasn’t been introduced by stealth?

Labour and it’s allies are determined to introduce state funding of political parties.

Among the terms of reference for the expert panel  to review electoral administration and political party funding are:

The review will examine the current system of election funding and the question of introducing a system of state funding of political parties in New Zealand, including:

“The second stage includes the establishment of a Citizens’ Forum to ensure public participation in the review process. This group will include citizens selected from each electorate in New Zealand. They will be tasked with examining the funding of elections and political parties.

Ms King said the Expert Panel and Citizens’ Forum will provide an independent, non-political perspective on the reform options. “The independent nature of the process should give the public confidence in the outcome. The two stages of the Review, including the Panel’s work and the public participation process, will be completed by the end of October 2009.”

I don’t know the panel members and make no comment on their abilities, but yet again Labour has failed to consult other parties about the appointments. Yet again they are taking a party partisan apporach to a constitutional matter which ought to have cross-party support.

And while it may have escaped Labour’s notice there is an election in less than two months which might bring a change of government. 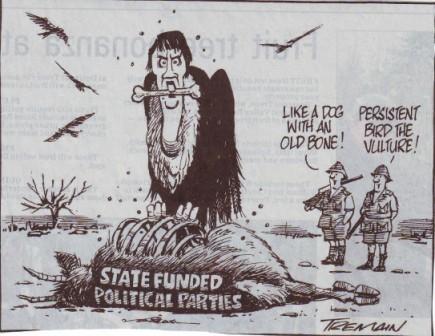