Who’s standing up for farmers?

. . . after 20 years of nuking our taste buds with bread that’s mostly sugar, Ronald McDonald’s special sauce, chicken vindaloo, deep-fried chicken and crisps made from artificially flavoured carpet underlay, most of us could not tell a beautiful piece of prime beef from a Walnut Whip.

. . . Right. So one day you’re in the supermarket and in front of you are two legs of lamb. One is from the UK and costs £20 and one is from New Zealand and costs £15. So that’s an easy choice. You buy the one from down under. Lovely.

But it isn’t lovely, because animals farmed in New Zealand and America and China and Brazil and Canada and Australia — with which Boris has just done a much-trumpeted trade deal — do not have anything like the happy lives enjoyed by the animals farmed here. . .

Both come from the pen of Jeremy Clarkson writing in The Times on why the UK should be proud of its animal welfare.

He might be right about that but he’s wrong that New Zealand standards for animal welfare aren’t at least as high as those in the UK.

Ironically that is partly due to the need to meet standards imposed to give access to the UK market when it entered the EU.

The Listener has caught up with Clarkson’s criticism and in its editorial (not online) asks: who would we rather have tell the world about New Zealand produce – Jeremy Clarkson of our own government? 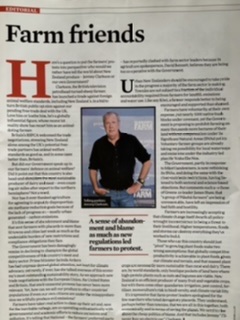 Britain’s RSPCA welcomed the trade negotiations, stressing New Zealand alone among the UK’s potential free trade partners has animal welfare standards as good as, and in some cases, better than Britain’s.

But did our Government speak up in our farmers’ defence on animal welfare? Did it point out that this country is also head-and-shoulders the most sustainable producer of dairy and meat – even counting air miles after export to the northern hemisphere? Not a word.

Nor has it ever thanked agriculture for agreeing to arguably disproportionate methane-reduction goals because of the lack of progress on – mostly urban-generated – carbon emissions.

It’s this sense of abandonment and blame that sent farmers with placards to more than 50 towns and cities last week as much as the undeniable burden of new restrictions and compliance obligations they face.

Yes. This government, at least as much as its predecessor in the mid to late 1980s, doesn’t understand farming nor does it champion it. The policies of the 80s were necessary, based on sound economics, and have led to better outcomes. Much current policy is unnecessary, based on political ideology not economics or science and will lead to perverse outcomes.

The government has been damagingly remiss in declining to champion the global competitiveness of this country’s meant and dairy sector. Prime Minister Jacinda Ardern has had unprecedented global attention, not least for climate advocacy, yet rarely, if ever, has she talked overseas of this economy’s most outstanding sustainability story. As we approach new trade negotiations with the European Union, the United States and Britain, that environmental prowess has never been more relevant. Yet how can we sell our products to other countries’ populations if even our own citizens are under the misapprehension we willfully produce every emissions? . .

Farmers here have been doing a lot to improve environmental practices and doing it for some time. But government policies and dictates give no indication they understand or appreciate that.

Urban New Zealander should be encouraged to take pride in the progress the majority of the farm sector is making. Townies are not subject to a fraction of the individual accountability required from farmers for landfill, emissions and water use. . .

The generally positive response to the Groundswell protests indicates that many urban people do understand and respect what farmers are doing.

It’s a pity the government doesn’t show it has nearly such a positive view and that it is failing to champion farming on the world stage.

Farmers irrigating just north of Christchurch are using the latest technology to ensure not a drop is wasted.

Preserving water quality is also front of mind as the land they irrigate is geographically linked to an ancient, slow moving aquifer which also supplies domestic drinking water to the city’s residents.

In the first project of its type in New Zealand, the latest in digital technology has been rolled out to Waimakariri Irrigation’s farmer-shareholders, taking the guesswork out of irrigating.   . .

A caution has been thrown out to New Zealand’s smaller, domestic market wineries which might be finding it more difficult gaining access to distribution channels.

“The industry is heavily concentrated in Marlborough, which specialises in sauvignon blanc production”, about three-quarters of the country’s wine production, by value, she said.

The New Zealand winemaking industry has an annual turnover of $2.5 billion and wine exports have doubled in the past decade to $1.7 billion per year, becoming the country’s sixth largest export by commodity. . .

We could do with a couple of mls of rain in northern southland pic.twitter.com/yj5GegSuaA

Changes being driven by computer scientists in the agri-food sector are providing new opportunities for Kiwi farmers.

The disruption, which is changing what we eat, was the focus of the KPMG farm enterprise specialist Julia Jones’ keynote speech at the Young Farmers Conference.

“There’s a restaurant in Boston with a robotic kitchen,” she said.

Spyce is a world-first and was created by four robotics-obsessed engineers who wanted healthy food at a reasonable price. . .

Kotara Kikuchi, a second-year student at Tono Ryokuho High School, an agricultural school, is on a home stay with three other boys from his school to do farming.

Kikuchi wants to experience agriculture, however, “I want to be a fisherman after graduating from high school”.

Fellow schoolmate Tokiya Ogasawara, 16, hasn’t decided what he wants to be.

“But there’s nothing outside agriculture that I want to do,” he said. . .

Agtech is not going to be a road to riches – here’s why – Glen Herud:

Agtech is quite trendy in New Zealand at the moment. But it’s unlikely to be a road to riches for those involved.

I would caution any entrepreneur from developing a tech solution for farmers.

No doubt, technology will change how agriculture is conducted. Just as it is changing all aspects of our lives.

But that doesn’t mean you can actually make any money out of developing some fancy technology solution for farmers. . .

Joint call made to end non-stun slaughter in UK –

The RSPCA and the British Veterinary Association have joined forces to call on the government to repeal a legal exemption that permits animals to be slaughtered without pre-stunning.

The latest figures from 2017/18 reveal that over 120 million animals were slaughtered without being stunned first – more than three animals slaughtered every second on average. . .

Farmers have been urged not to be ”seduced” by short-term gains as rumours swirl that an announcement by Silver Fern Farms of a 50-50 joint venture with a Chinese company is imminent.

Heriot farmer Allan Richardson, who has led a group of shareholders seeking a meeting to discuss a possible merger with Alliance Group, believed foreign ownership of the co-operative was ”just around the corner”.

Mr Richardson expected Silver Fern Farms could make an announcement to farmers within the next week. . .

When examining the current low dairy payout there are a number of factors that come into play.

One overriding issue is the protected nature of dairy trade throughout the world. For some strange reason, dairy seems to be one of the most protected food commodities.

This high level of protection means there is only a small global market for dairy products that are freely traded and so, if we get even the slightest market shock, you get quite a big price fluctuation whether it’s up or down.

For me, this emphasises how critically important breaking down trade barriers are for New Zealand’s prosperity not only on farm, but for all those regional economies that rely so heavily on agriculture. . .

A farmer in the heart of the North Canterbury drought says a prolonged dry spell brought on by El Niño will put already struggling farmers in dire straits.

Vince Daily, who runs a 160 hectare cropping farm in Cheviot, said the NIWA weather station on his farm showed the soil moisture level was at 30 percent, rather than the normal 100 percent it is at at this time of year.

Mr Daily said any drought caused by El Niño would just be a continuation of the current conditions.

Being part of a TeenAg club at high school kept Northland teenager Sam Moscrip in school longer than he had intended, and it has opened him up to many new possibilities in the primary industries.

The TeenAg club format has been developed by New Zealand Young Farmers as a way for younger people to get started with the movement.

Young Farmers are taking a “pipeline” approach, explains NZYF chief executive Terry Copeland, developing a format to suit each age group around the Young Farmers set-up. New Zealand Young Farmers has existed for more than 80 years and is for people aged 16 to 31. . .

As the New Zealand dairy industry has expanded rapidly in recent years so too has the dairy support farm.

So what is the dairy downturn going to mean for the dairy support farmer?

This is an important question which needs some serious thought by both sides of the industry.

Already we have seen many dairy animals not go out to the previously arranged winter feed.

Thankfully for those farmers who had grown this feed, the Mainland drought and North Island floods meant there was an alternative option to sell it. . .

Rearing calves on weight gain has leapt back into fashion on dairy units around the country.

A beef-cross calf reared to 100kg may have netted a dairy farmer $400-$500 this season, PGG Wrightson general manager of livestock Peter Moore said.

“If you look over the country there’s been a lot more calves reared than in the past,” he said.Farmers were rearing good Friesian bull calves or the male offspring of Angus or Hereford cows mated late in previous seasons. . .

Wool shorn off an overgrown sheep found near Canberra on Wednesday has set an “unofficial” world record for the heaviest fleece removed in one shearing, the RSPCA says.

It smashed the previous world record held by a sheep in New Zealand called Shrek, whose fleece weighed 27 kilograms. . .

(BusinessDesk) – New Zealand wool is trading at record high prices, pushed up by strong demand and limited supply, though the outlook is murky.

Combating pests and diseases of tree-based crops and summer fruits was the target of the latest MG Marketing ‘Growing You’ workshop held recently at Lincoln.

MG Marketing, a co-operative organization that has over 90 year of successful record of growing, distributing and selling a comprehensive range of fresh vegetables and fruit, in collaboration with Lincoln University, the Biological Husbandry Unit (BHU) and the Bio-protection Research Centre (BPRC) developed workshops for growers and commercial operators from all around New Zealand to advance their scientific knowledge and practical skills.

About 20 of MG Marketing’s top growers from diverse operations such as cherries, feijoa, raspberry, citrus, and tree-based fruits, from across New Zealand travelled to Lincoln for the workshop. . .