Dot dreamed of having a castle when she was a child,.

Many years and a lot of hard work with her husband Neil later, they’ve got it.

They’ve earned every moment of joy they get in their new home; and the special code of compliance from the Waitaki District Council, designed to fit its setting: 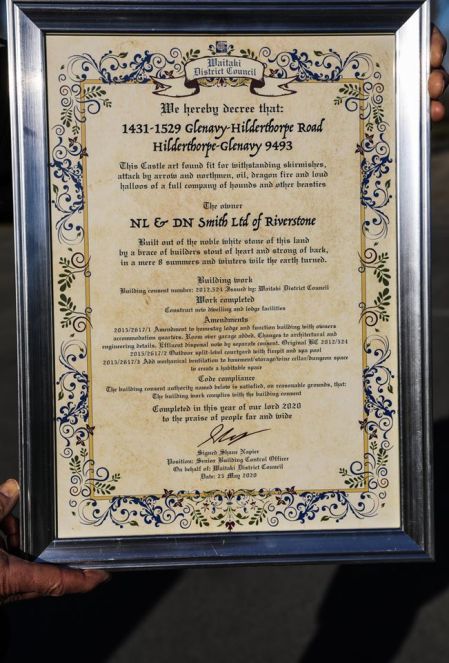 We’d taken the precaution of booking a table for lunch with friends at Riverstone Kitchen.

Not many years ago this was a very stoney paddock. Now it’s home to a thriving business, set in beautiful and bountiful gardens, overlooked by newly built Riverstone Castle.

The first car park was full when we pulled in, the shops were bustling and the restaurant was busy.

But busyness didn’t detract from the service which was up to the usual high standard. The food was simple and delicious, and the company fun.

The Riverstone complex makes a valuable contribution to the economic and social fabric of the Waitaki District and I’m grateful for it.

Dot and Neil Smith are dreamers, but not in the sleepy, never get anything done way.

They are people who work hard to make their dreams come true.

. . .It’s a bit like Grand Designs on steroids. Dot Smith and husband Smithy (aka Neil) start with a bare paddock. Smithy, who has been dragged around innumerable castles in Europe, said to her one day: “What if I dug you a hole in the ground there and we put a little island in the hole and put a castle on there?”

Well, it’s not so much of the little. This is a massive project. The completed Riverstone Castle, built from solid Oamaru stone quarried locally, literally sits on an island. There’s even a dungeon.

But as with every good home building show, this one is just as much about the people as the build.

Pink-haired, 60-something Dot is clearly a romantic, but not in any drippy way. This is a woman who, with her family, has worked hard to run a successful empire that includes six dairy farms, an award-winning restaurant, giftware shops and gardens to die for. But she loves a fairytale.

“You’ve got to make a bit of romance happen in your life, otherwise when you get to 65 or 70 you’re a bit past all the other romantic parts,” she says. “So we’ve got to make little fairy stories where we go.”

Dot: Queen of the Castle screens on Prime at 8:30 tonight.