Young Farmer of the Year to undergo major overhaul:

New Zealand’s longest-running agricultural contest the FMG Young Farmer of the Year is set to undergo a major overhaul.

The revamp is designed to entice more women to enter the iconic contest and to help showcase the country’s food story.

As part of the significant changes, the TeenAg competition will be rebranded the FMG Junior Young Farmer of the Year. . .

My youngest is 25 now but it seems no time since I was stopping the truck so my kids could get out and pick the lambs up.

It’s natural to want your kids and grandkids to be involved on the farm and WorkSafe doesn’t want to change that.

However, farmers are responsible for ensuring other people, including children, are not put at risk.

Vehicles are the major factor in fatal accidents on farms and children are particularly vulnerable to that critical risk.  . .

New campaign aims to reduce injuries in the woolshed :

The farming industry is trying to cut down on injuries in and around the woolshed with a new online injury prevention programme.

In 2017 there were 755 work-related injuries in wool harvesting, resulting in 9300 working days lost to the industry, according to ACC weekly compensation data.

The same year there were 4700 work-related injuries in wool growing, resulting in 35,000 days lost to the industry. . .

Independently nomianted candidates for Fonterra board of directors’ election announced:

Peter McBride, Jamie Tuuta and Ashley Waugh have been announced as the Independent Nomination Process candidates for the 2018 Fonterra Farmer Directors’ election.

Bull Breeding Worth shifts reflect increase in value of fat :

In what is the most significant change to global dairy trade in the last 20 years, milk fat will earn dairy farmers more than protein in the 2018/19 season.

“Fat has been a low value milk component but has seen a steady rise in recent seasons due to consumer-driven market value,” DairyNZ Strategy and Investment Leader Dr Bruce Thorrold says. “That’s a welcome change for New Zealand dairy farmers who are set to receive a strong 2018/19 milk price, buoyed by the value of milk fat.” . .

Government direction on transmission may be needed for dairy – Gavin Evans:

Government intervention in transmission will probably be required if the country is serious about electrifying dairy processing to reduce the country’s carbon emissions, Babbage Consultants associate Richard Stretton says.

Processors Synlait Milk and Fonterra Cooperative Group have committed to electrify small sites as part of a progreamme to reduce coal as a fuel source for processing capacity. . .

Fonterra employees will be able to spend up to a third of their time on projects outside their day jobs in what is believed to be a New Zealand-first initiative.

Fonterra’s ‘amp’, short for amplify, is an innovative new approach to working that is set to change the face of employment in the Co-op. Using a gig-economy type approach, employees will be empowered to work on internal projects outside their normal role, based on their individual skills or areas of interest. . .

Had it hadn't been for Moat sniggering childishly, Id have been totally unaware of their presence. 🙄 pic.twitter.com/xetTRnUz0z

The 400 entries in the Steak of Origin contest were whittled down to a top 20 and these were judged by BMX World Champ, Sarah Walker, Farming Show host Jamie McKay and former All Black Richard Loe with the expert assistance of professional chefs, Graham Hawkes and Hester Guy.

Jamie is interviewing the winners on his show which will be online here soon.

Glammies have the yum factor

We left the Wanaka Show before the winner of the Glammies was announced and I haven’t managed to find anyone who can give me the details.

In the meantime I can report that all the samples the crowd were given to taste were delicious and bring you some photos of proceedings:

It’s a tough job but Agriculture Minister David Carter, Blanket Bay Chef  Mark Sycamore and farmer and former All Black Richard Loe were coping quite well with the delicious aroma coming from the barbeque while they waited to judge the Glammies.

David, a farmer, shows he doesn’t just know how to raise good lambs, he can cook them too:

But he’s not about to swap day jobs with chef Graham Hawke: 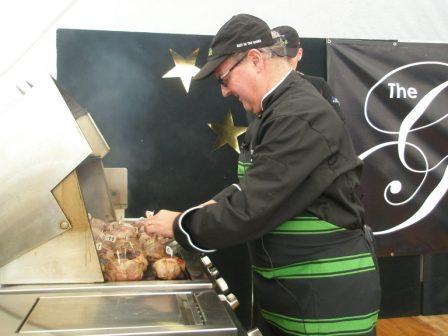 Graham explained the cooking process to onlookers and gave his tip for succulent lamb – rest it for as long as you cook it. I’ve followed that advice since hearing him give it at the inaugural Glammies a couple of years ago and it really does make a difference to the tenderness.

Graham is a chef at Flannagans Seafood Resaturant in Invercargill but the delicious lamb he served yesterday and  this recipe show he can cook produce from the turf as well as the surf.

UPDATE: Kelvin King has left the full results in a comment below.