British retailer Marks & Spencer will no longer stock New Zealand lamb in its Scottish stores, after a decision to only sell locally-produced lamb.

New Zealand exports about 29,000 lambs a year to Marks & Spencer in Scotland and the decision will hit about 10 or 12 lamb producers in this country.Beef and Lamb NZ chairman James Parsons is in Britain, France, Ireland and Belgium this week to assess what effect Brexit may have on New Zealand exports. . .

In just six years, a farmer south of Whanganui has grown his business from a single block of land to a multi-million dollar company supplying restaurants and supermarkets globally.

This week Coastal Spring Lamb, at Turakina, received its first order from China, giving it a foot-hold in the biggest market in the world.

Founder Richard Redmayne said this was the eighth export market for the firm since it began selling overseas in January last year. . .

At war with the pukeko – one gardener’s greatest foe – Charlie Mitchell:

The pukekos strike just before dawn, leaving hundreds of destroyed cabbages and a market gardener in despair.

Commercial gardener Brent Treleaven is at war with the native birds, which have caused thousands of dollars worth of damage on his farm north of Christchurch.

He had to relinquish part of his market garden to the pukeko after they took it over. . .

An Australian farmer says the pep talks he gives his cows is an easy way to bring cheer to his colleagues, who are facing some trying times.

Two videos of southwestern Victoria farmer Adam Jenkins, posted on Facebook by his wife Catherine, have been shared thousands of times in the past few days.

They’re of Mr Jenkins giving his cows encouragement before heading into the milking shed and then afterward congratulating them on their efforts. . .

Dairy farmers’ ability to remain internationally competitive is likely to be a hot topic when dairy industry and research body, DairyNZ, reviews the past year at its Annual General Meeting (AGM) in Canterbury this month.

DairyNZ is holding its AGM in Ashburton from 11am on Thursday, October 27, at Hotel Ashburton.

Industry body chairman Michael Spaans says the AGM will review the 2015/16 dairy season, including the low milk price challenges, and discuss DairyNZ’s highlights for the year and future direction. . .

Latest industry results confirm LIC has the best bulls in the country – by far:

The genetic gain and value that LIC bulls are delivering on New Zealand dairy farms is confirmed in the latest Ranking of Active Sires (RAS) list.

A phenomenal 27 of the best 30 bulls on the All Breeds list are LIC’s, including the top 14 in a row of all breeds.

“These bulls are managed by LIC on our farmers’ behalf, with massive contributions from our top breeders and our Bull Acquisition team,” LIC General Manager Biological Systems Geoff Corbett said. . .

New Zealand’s fastest bird, the karearea/ New Zealand falcon, has been voted the 2012 Bird of the Year.

. . . karearea are also known for their aerial acrobatics. They have a maximum speed of 230km/hr and can catch their prey mid-flight, making this falcon the daredevil of the air.

Bird of the year

The tui was Forest and Bird’s inaugural bird of the year, in 2005.

The fantail (piwakawaka) won the following year then it was the grey warbler(riroriro). The kakapo triumphed in 2008 and the kiwi in 2009.

It was the kakariki’s turn in 2010 and the pukeko claimed the title last year.

Which bird will win this year?

You can vote here and not only see the birds which are vying for the title but hear their calls as well.

The Pukeko has won Forest and Bird’s title of Bird of the Year.

Forest & Bird’s Advocacy Manager Kevin Hackwell says the pukeko is one of the best ambassadors for our wetlands.

“These swamp hens love feeding on the grubs and plants that can be found in our wetlands,” says Kevin Hackwell. . .

The pukeko is thought to have landed on our shores around a thousand years ago from Australia.

“It’s an immigrant that set off at great personal risk and without the aid of modern navigational devices to build a home here in Aotearoa. And it didn’t just survive, it thrived. I like to think there’s a little bit of pukeko in all of us.”

The emperor penguin – not traditionally seen as a New Zealand native but boosted by Happy Feet’s surprise visit earlier this year – polled 12th. . .

This is the seventh year Forest & Bird has run the popularity contest. Past winners include the tui, fantail, grey warbler, the kakapo, the kiwi and last year’s victor was the kakariki.

This year’s results were:

Forest and Bird is doing its annual poll to find the bird of the year.

Candidates for the title of our favourite feathered friend include the Barn Owl, which is New Zealand’s newest native bird, and more well known candidates like the piwakwaka (fantail)  and korimako (bellbird).

The karearea’s (NZ falcon) chances ought to be boosted by featuring in an interview with its campaign manager but so far the Pukeko is a clear leader with 5228  votes.

The kiwi is New Zealand’s number one bird according to a Forest & Bird poll.

The top 10 birds in this year’s poll are:

This is the fifth year the competition has been run. Last year the kakapo won and the kiwi didn’t make the top 10.

Is it my imagination or has there been an explosion of the pukeko population?

The increase in the number of live ones could be a result of irrigation providing more watery habitats for them.

The number and variety of those made for house and garden is no doubt due to an increasing number of artists who, like me, are intrigued by these bright, comical birds: 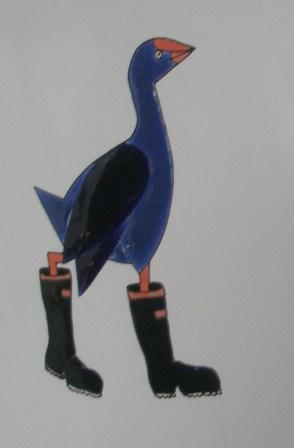 While searching for this Friday’s poem I discovered Janet frame shared my fascination.

Puekeko is from Janet Frame stories and poems, published by Vintage.

If a shadow violates

will spear the dark