Whoever is behind it says:

This time around there can be no more important and over-arching issue than the secretive Trans-Pacific Partnership Agreement (TPPA) which New Zealand is poised to sign, yet receives scant attention in the campaign and is ignored in any of the “surveys” that we’ve seen. From the authenticated leaked information that’s available, it’s clear that this agreement is much more than the free trade deal that its National Party adherents describe. It is in fact an unprecedented move towards international corporate involvement in governance, including vital areas like education, health and pharmaceuticals, environment, agriculture, investor rights and much more. Under the TPPA, government legislation in the interests of the public — but against the interests of foreign business — may be challenged by a corporation in a closed tribunal on the grounds of impeding free trade. This precise thing has already happened in Australia, where the country’s plain packaging laws on tobacco were legally challenged by a tobacco company. The truth is that many of the electoral policies of some NZ parties could not be implemented under the TPPA! This, and not the flag, is the real sovereignty issue, and it\`s barely being raised. By comparison, every other electoral issue is window dressing.

I don’t think most voters share this view of the importance of the TPPA, nor what appears to be a hard-left, anti-trade view of it.

However they are right about this:

We remain perplexed about the electoral alliance between Mana and the Internet Party, given that Mana’s leader is an avowed socialist, while the Internet Party’s founder is an economic libertarian in the mould of the anti-state Pirate parties of other countries. . .

I took the test: 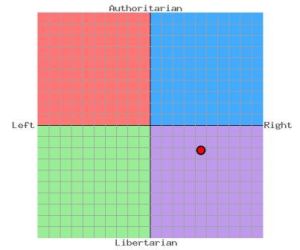 That isolates me from any of the parties but I think that’s the fault of the placing of the parties, the questions – some of which are on issues and ideas which aren’t relevant here – and assumptions made about how answers relate to the parties.

TVNZ’s Vote Compass shouldn’t be taken as fool-proof, but it has the parties better placed and is based on questions more relevant in New Zealand.

It put me in a similar place but has the National Party there as more centrists and liberal than the Political Compass does: 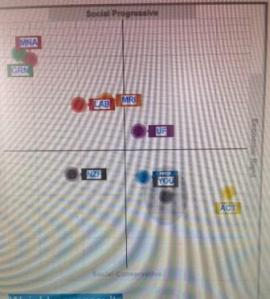 Kiwi in Canberra pointed me to the ABC’s political compass.

You don’t have to be Australian, or in Australia, to do it.

I didn’t know enough about some of the issues to give a really accurate answer but somewhere in the light grey area is probably where I feel most comfortable.

A lot of issues aren’t black and white, and nor are political views.

What particularly caught my eye about this was that

Liberation suggests people who are undecided about who to vote for tomorrow try the political compass.

I did and got this result:

Economic left/right 3:88; social libertarian/authoritarian -2.87 is slightly  more centrist and libertarian than last time I did the test when I was right  4.38, Libertarian: -1.74.

But it’s absolutely useless as a guide for voting because there are no  New Zealand parties in that square: 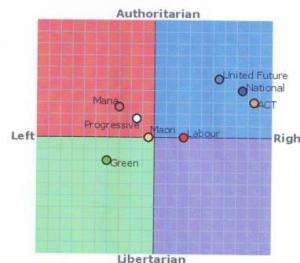 I’m taking that as an indication of faults in the test and analysis of the parties rather than my decision and sticking with two ticks for National.

Scrubone is still updating the political compass for bloggers.

I just did this test and got this result:

And when I did  this test  today I got this result:

Last year when I did the tests I got these results:

I’m not sure if the slight difference in the results is a reflection on the reliability of the tests or a small movement in my views.

The one thing which stands out when I do multi choice tests like the political compass is that I don’t like black and white answers because my response to many of the questions is but/providing/if. . .

That said, I’ve done two versions of the political compass and come out in a similar position as a right moderate social libertarian.

This one is the political spectrum quiz:

I’m left of Freidman and right of Ghandi on the economic spectrum but on a similar level to both on the social one.