The Christmas Miracle of Jonathon Toomey

Jonathan Tommey was called Mr Gloomy by the village children. He thought Christmas was pish-posh.

Then seven year old Thomas and his widowed mother knock on his door and ask him to carve a set of Christmas figures.

This is a simply worded, beautifully illustrated book which won several awards, including the Kate Greenaway Medal and the Bisto Irish Children’s Book Award. 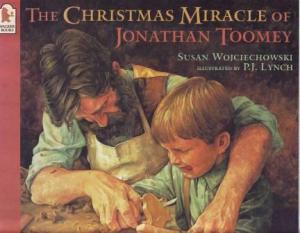