Just a few years ago, it would have been difficult to imagine anyone saying this, let along Dame Kiri Te Kanawa:

. . . While in Dunedin, Dame Kiri said she hoped to visit Dunedin’s Royal Albatross Colony and take a trip to Oamaru.

I don’t know if her hopes were realised, if they were she would have found the town under full steam for the fifth annual Steam Punk festival:

From Auckland to Ashburton, Oamaru to Opunake and even Invercargill, they steamed into Oamaru for a weekend of Steampunk.

The annual festival, in its fifth year, is growing so rapidly – to 15 events over four days this year – that organisers have a tiger by the tail and will be looking for more help in the future to maintain the momentum. . .

ne of the Steampunk organisers, Helen Jensen, was amazed at how the event had grown from its inception in 2010, when it was a one-day affair – a fashion show with a gala dinner.

But, she admitted, it was getting to be a handful for two main organisers, albeit with a lot of volunteer help.

”If it wasn’t for people popping out of the woodwork, I don’t know where we would be,” she said, pointing to volunteers who had just turned up to offer help getting things ready for yesterday’s fashion show.

The number at the mess dinner with airship and teapot racing had trebled from last year, 110 being fed and entertained.

The 200 tickets to last night’s dinner were sold out.

She estimated probably 80% to 90% of people at the main events were from out of town, but that had been one of the main aims – to get people to Oamaru as a boost for the town. . .

The weekend’s festivities included Oamaru On Fire which was also a raging success.

A funeral in Darfield on Friday and family and farm commitments had to take priority over most of the festivities.

But I did manage time for a wander around the historic precinct after a visit to the Farmers’ Market on Sunday and was entertained by a wonderful procession of people in Steam Punk attire.

Over at Oamaru Life there are photos and commentary on the Steampunk Festival and Oamaru on Fire  – the latter includes a video of the light show.

The rediscovery of the historic precinct and the introduction of steam punk are just two of the attractions that are putting Oamaru on the map.

It’s still a small town but it’s steaming ahead.

When Chorus launched it’s competition to find New Zealand’s #gigatown, Oamaru lept to the top of the points table, and it’s stayed there.

How is it doing it?

Oamaru Life has the answer:

The Chorus Gigatown campaign is only 9 days old, and yet Oamaru, a town of just 12,000 people with a reputation among New Zealanders as being where “nana lives” has turned out to be a social media barnstormer, producing over 110,000 votes to date, more than 25% of the total number of votes cast so far.

What can possibly account for this success? Well, Oamaru has proven before that when it comes to matters of civic pride, we are second to none. This was amply demonstrated when it came time to vote for New Zealand’s “sharpest town” a few months ago, which Oamaru won handily, mobilising our townspeople and our friends all over the world to vote for us (and then, too, we had more votes than the other five contenders combined).

Another reason for Oamaru’s success is that we are actually a lot more clued-in to social media and the ways of the modern world than our reputation as New Zealand’s “Victorian Town” would suggest. That’s one reason why the NZ government chose Oamaru as one of the two pilot towns to trial online census forms, rather than the traditional mail-in forms, and we wowed them with higher-than expected submission rates.

The campaign has gripped not just the town but the wider district, ex-Oamaruvians living elsewhere and our friends and relations all over the country, and the world as well.

But the competition is only 10 days old.

There’s 50 and a bit weeks to go yet and we welcome more support:

But we can use all the help from our friends around the world to help make Gigatown a reality for us (if you don’t know what’s at stake, one town in New Zealand will be chosen to be wired to the Southern Hemisphere’s fastest internet connection, turning it overnight into a magnet for high-tech investment and into an instant cutting-edge technology hub for the entire region). If you would like to help, here’s what you can do:

1. Go to the Chorus NZ Gigatown website (www.gigatown.co.nz) and click on “Join Up”, where you can register with either your Facebook or Google+ account. Then it will ask you to select the town you support. Please choose Oamaru, since doing so gives us 10 more points just like that!

2. Go to the Oamaru Gigatown Facebook page (www.facebook.com/Gigatown.Oamaru) and post on there, or comment on other posts, but always adding either #gigatownoam or #gigatownoamaru (but not both!) to your comments. It’s important that there be other meaningful text besides that tag, too, since otherwise it may appear to the Chorus watchdogs as an automated post, which would be disqualified.

3. If you’re on Twitter, then post tweets using the hashtags #gigatownoamaru or #gigatownoam (but again, not both) along with some other text, images, or whatever you like. Each of these will count as a point, as will any retweets of other posts with the same tags.

4. These same hashtags used on other social media platforms count automatically, too, such as Instagram and YouTube. Blogs on WordPress or Tumblr using the hashtags count as well, but only if you have first registered them on the Chorus Gigatown website.

The rules of the competition are subject to change at any time, and there is a lot that is still not 100% clear about the competition, so you might want to sign up for updates on a special site that Oamaru has set up, gigatown.oamaru.org.nz. There you will find all the information you could possibly want about this competition, see all the posts with Oamaru’s hashtags in one place, and generally support us in our bid to be the Southern Hemisphere’s fastest, as well as sharpest, town!

The Oamaru gigatown secret is community spirit and we’re happy for the whole world to be part of that community.

Yesterday Waitaki District Mayor Alec Familton was given a pipe band escort to the Farmers Market where he read the Ordinance and Proclamation which established the Oamaru Town Board in 1862.

Oamaru Life has a fuller report  and much better photos.

Tomorrow a five-day birthday party starts and a variety of other events are planned for the next 12 months.

Close up took a look at last weekend’s Steampunk Festival in Oamaru.

The video is here.

Oamru Life has photos of Oamaru on Fire which opened the weekend’s festivities.

I’ve borrowed this one:

Last month Cuisine listed Oamaru as one of the 25 hippest places in the world, this month AA Directions reckons it’s funky:

‘Character’ according to the dictionary is the quality of being individual, typically in an interesting or unusual way. With that definition in mind, we went in search of New Zealand towns with genuine character, towns with strong, distinct personalities. Here’s what we found…

These are characters who reside in the weird and wonderful world of Steampunk – an imagined Victorian future where electricity fizzled out and steam remained king.

Some call it science fiction, others an alternative history. It’s a style of dress, a form of art and, for a select few, a way of life. However it’s defined, one thing is certain: Steampunk is alive and well in Oamaru.

It all started two years ago, with a beer mug. . .

It’s as small as a piece of jewellery or as large as a steam train which rewards those who feed it with $2 coins with a light and sound show: 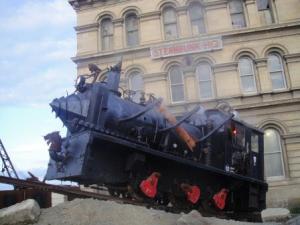 Steampunk isn’t the only thing that’s hot down here, via Oamaru Life I discovered that wine blogger Robert Giorgione asks if Waitaki could be the next wine hot spot:

Before we proceed any further, I know exactly what you’re thinking right now. Who or what the hell is Waitaki? More to the point – where is Waitaki, more like? To put it plainly and simply, the Waitaki Valley (a.k.a Waitaki) is a very small wine region out in the middle of nowhere in New Zealand. Or as Kiwis would say – “it’s out in the woop woops mate!” In fact, I passed through this remote and picturesque little piece of bush in 2004 during my road trip around the South Island. . .

Passing quickly over the phrase which is not woop wopps but wop wops and the quibble that there’s little if any bush left in the valley, his praise is welcome recognition of the valley’s growing wine industry.

The Waitaki Valley isn’t the easiest place in which to grow grapes, but the wine which results from those who persevere has a growing reputation for its quality.

Wheelman David Wilson was welcomed back to Oamaru on Sunday  after riding from Stewart Island to Cape Reinga on his penny farthing Pioneer Spirit.

To ride the length of the country on a modern bike is no mean feat, to do the trip of more than 2,000 kilometers on a penny farthing is even more of an achievement.

In 1884 when the Auckland to Wellington journey was usually made by coastal steamer and the main trunk railway was still a dream, the first bicycle ride between the two cities was accomplished by Wheelman J Fitton on a 52 inch-wheel penny farthing. Then, 123 years later during 2007, English Wheelman Joff Summerfield rode his penny farthing from Invercargill to Auckland as part of his around the world tour. Never, however, in the history of the colony has a wheelman been recorded as riding a penny farthing the entire length of the country until now. Conception for this journey occurred in 1998, with tentative planning starting in 2005.

The emphasis on the ride is that of ‘promoting awareness of the immense benefits of community economic and cultural developments’.

This ‘Aotearoa New Zealand History in the Making’ ride is being undertaken by New Zealand Wheelman and Captain of the Oamaru Ordinary Cycle Club ( OOCC), Mr David (The Judge) Wilson mounted upon ‘PIONEER SPIRIT’, an 1880s-style, 54 inch high-wheeled penny farthing bicycle replica manufactured in Oamaru, with its elevated centre of gravity, solid rubber tyres, fixed pedal system and primitive “spoon” brake. He will be wearing the breeches and knee high socks of the 1880-era bicyclist, and will be carrying only one change of clothes. He will be travelling alone, relying on his own resources and the kindness of strangers for comfort along the way, and will keep a daily log (blog) of the trip at the end of each days ride. The ride will require surviving such modern hazards as bad weather, hunger, thirst, stray animals, poor roads and encounters with inconsiderate and menacing motorists.

Oamaru Life has a video of his welcome home.