This is what it looked like with any irrigated land standing out like blots of green ink on parchment.

Thanks to the North Otago Irrigation Company Scheme this is what it looks like now: 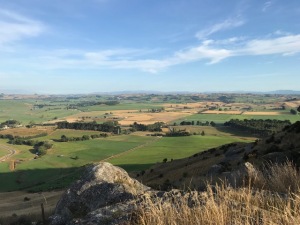 The big brown patch is barley, in the distance are dry land hills which stand out against the irrigated paddocks.

Unlike many other areas where irrigation has been curtailed or cut altogether, the NOIC scheme and others in the district which are fed from the Waitaki River keep going. The Waitaki keeps on flowing to generate electricity providing enough water to spare for irrigation and still keep the river above its minimum flow level.

If it wasn’t for so much irrigation in North Otago now the media would have been full of drought stories and Oamaru would be feeling the pinch as farmers stopped spending.

The economic and social benefits of that are obvious.

The environmental benefit is less obvious but equally valuable.

Water on land keeps pasture growing, protecting soils from erosion. A condition of consent for the scheme was that water was diverted to the Waiareka Creek to keep it flowing. In the past it would have been a series of stagnant pools after so little rain, now it runs clear.

Irrigation has made farming in North Otago sustainable. The economic, environmental and social benefits of that flow through the district.

There are other parts of New Zealand where water could be stored at times of high flow to be used in dry weather but in the current political climate the chances of that happening are slight.

Our first foray into irrigation was with underground water pumped straight into the irrigator.

It didn’t take long for us to work out we could do more by building a dam to store water over winter and other times when we didn’t need to irrigate so we had more when we did.

We started with a relatively small dam then built a bigger one.

The difference that made is illustrated by this: 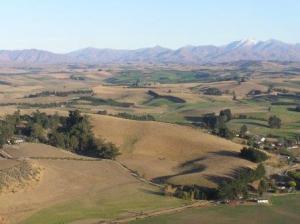 Thanks to the North Otago Irrigation Scheme, most farms are irrigated so now when, as we often do on the east coast, suffer from drought it’s the few dryland farms which stand out from the green.

Even those who don’t, or can’t, irrigate benefit because when it’s dry they have options of selling stock to or buying grazing or supplementary feed from, those who have irrigation.

There are obvious economic benefits from that, not just for farmers but for those who work for, service and supply them too and that flows on to the wider district and the country.

There are also environmental ones.

Our soils are fertile but they blew over from the Waitaki Valley and if we don’t look after them they’ll blow further away. Independently audited environmental farm plans, which were a condition of the resource consent, ensure that every farm which takes water farms sustainably.

Irrigation has brought social improvements too. For the first time since the ag-sag of the 80s, farmers adult children are returning to North Otago in good numbers. There were four houses on our farm and two neighbouring ones before irrigation, there are now 14 and the 15th is under construction.

We’re the oldest in any of those houses, the next oldest couple is around 40, everyone else is 30 or younger.

The NOIC scheme didn’t need to dam a river. It takes water from the Waitaki, pumps it up a hill into a holding pond from which it’s fed through pipes under pressure to the farm gate.

A bit further north the Opuha scheme did dam a river to provide irrigation and recreational opportunities  like swimming, boating and water skiing.

News of another drought in the North Island where they don’t have this insurance against the weather brings with it stories of the problems which follow.

Not every area has the water to use for irrigation, but those which do know the benefits which come from making a dam difference.

Central Plains Water Ltd (CPWL) has signed an historic agreement with TrustPower to store water in Lake Coleridge for use by its shareholders when the Rakaia River flow is low.

Doug Catherwood, chair of CPWL, in announcing the agreement said he was unaware of any other storage facility offering to release contracted water on demand in New Zealand.

“We have to book the volume a year in advance but TrustPower will release it with about a day’s notice,” he said.

The agreement follows months of discussion and has been made possible by the Government’s decision to alter the Conservation Order covering the river and lake.

“This is another big step forward for us. Lake Coleridge is an existing reservoir, and at this early stage the Coleridge Storage will support Stage 1 at least of the CPW Scheme, which involves water supply to 20,000 hectares of farming land,” Catherwood said.

TrustPower would provide 95% reliability for the scheme for Stage 1, he said. Before the agreement was signed, CPW was able to offer only 70% reliability with the run of river supply.

“This is good news for us. Ninety-five per cent reliability is virtually water every day for farmers. This is a real alternative to our own water storage reservoir.”

There is potential for more stored water to be available for future stages of the CPWL Scheme.

“Research will need to be conducted before we can be assured on the reliability of the next tranche of water. We now know the reliability will be considerable and well worth pursuing. This will constitute the next phase of our discussions.”

Catherwood said having reliable alpine water was key for the viability of CPWL.

The positive impact meant that current ground water users who are pumping from up to 200m wouldswitch to surface water, releasing the pressure on the over allocated ground water usage, enabling the aquifers to be replenished and increase the environmental flows in the lowland streams.

“As our construction proceeds over the next couple of years, we will provide equal reliability for the coming stages of the CPW, without compromising environmental concerns for the river and the lake.”

The first stage of the irrigation scheme will run from near the Rakaia River bridge to near the Hororata River. It will be worth approximately $144 million.

A high percentage of reliability is the key to success for irrigation.

Without it water takes are reduced or cut altogether when farms need them most.

We were in North Canterbury in March visiting farms which had had their water take cut. That was having a significant impact on grass growth and milk production.

The North Otago Irrigation scheme has 99.9% reliability thanks to minimum flow requirements on the Waitaki River and the seven dams above the supply ponding area which can store water until it’s needed.