A rushed change to NAIT regulations has caused growing disquiet about the haste in which the new laws were passed under urgency in Parliament.

The farming industry at first publicly welcomed the changes: DairyNZ and Beef + LambNZ approved, although Federated Farmers said they were rushed.

Many people have told Rural News that they question the hastily enacted new laws and some of the new powers given to MPI. . .

Merino wool is fetching prices at auction not seen since the late 1980s and early 1990s.

Last week’s South Island wool sale in Christchurch was “outstanding” for merino and mid micron wool, following on from the continued strengthening in Australia, Roger Fuller, of CP Wool, said.

Australia was experiencing horrendous drought conditions, which was reflected in the prices being achieved in New Zealand.

The problem would be exacerbated next year as a lot of sheep would not survive the dry conditions, Mr Fuller said. . .

Trees to plant $2464
Digger $2352
Creating a wetland with and for future generations $priceless and then
Being told by @FishandGameNZ That farmers don’t do anything? @TheMusterShow @FedFarmers pic.twitter.com/F5ciJc8fvW

The Otago Field Days are expanding to fit their new name as their October dates approach.

The field days are about to be held for the third time, having sprung up in 2016 as a new initiative from the Palmerston and Waihemo A&P Association.

They were initially called the East Otago Field Days.

”What started out as a small local event has clearly struck a chord with people,” chief executive and A&P Association president Paul Mutch said. . .

Get in behind Kelvin – the thermokennel, a Kickstarter to change the lives of kiwi dogs:

A dog’s life is about to get a whole lot better thanks to a brilliant bit of Kiwi innovation.

Our hardest working farm hands, the renowned New Zealand working dog, has always had a tough but rewarding job.

All day out in the weather mustering sheep and keeping the farmer company, only to spend the night under a makeshift shelter or kennel, on an old blanket for warmth – that’s the way it’s been since this nation was founded, but one Kiwi entrepreneur thinks it is time for a change. . . 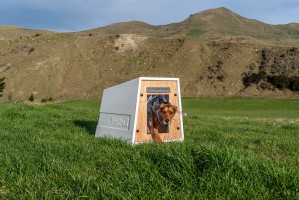 See more at the Kelvin the Thermokennel website here.

A trial is underway to measure the growth rates of Angus/Jersey beef calves from birth to finished product.

Red Meat is one of the most bioavailable sources of dietary iron.
Iron is an essential mineral & necessary for a balanced diet.#LoveLambWeek #TuesdayThoughts #TuesdayMotivation pic.twitter.com/2S7Px7ynQE

Salute to our struggling farmers as Royal Adelaide Show kicks off –

AROUND the Adelaide Showground’s cattle, pig and sheep sheds, farmers from across the state are proving they themselves are the toughest breed.

Low rainfall and high feed prices are putting huge pressure on their incomes and forcing some to make tough decisions about their future.

As the Royal Adelaide Show opened yesterday, behind the draw of the Showbag Pavilion and the excitement of the carnival, farmers who had travelled to Adelaide carried the weight of a tough season on their shoulders.

Among them was Michael Blenkiron, of Keyneton, in the Barossa Valley, who said many working side-by-side in the pig pavilion were “in survival mode”. . .