The Taxpayers’ Union has updated its Bribe-O-Meter which costs party policies; 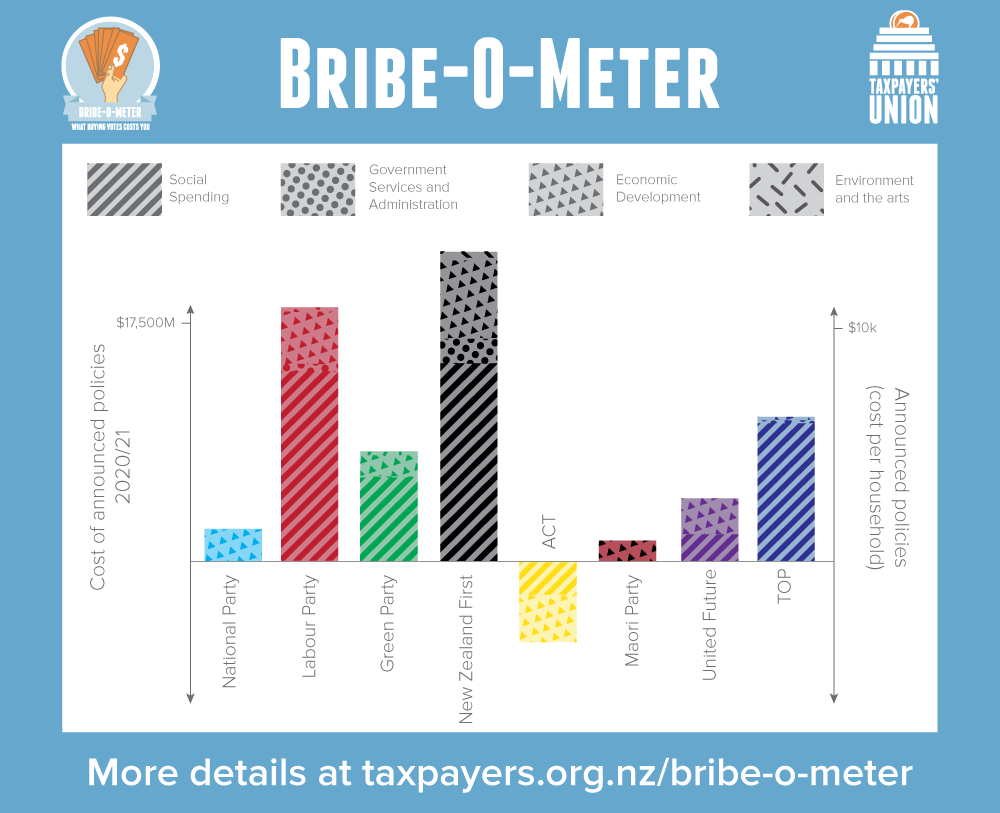 Opposition parties appear to be spending up to the rafters with sets of policies many times more expensive than the last election. New Zealand First is pushing the boundaries of fiscal free-spiritedness, so far promising $22.9 billion in new spending over the next electoral term. Labour is close behind with $18.9 billion, followed by TOP at $10.7 billion and the Green Party with $8.1 billion.

The incumbent governing parties have been much more controlled. Somewhat surprisingly, given the size of the party, United Future has promised the most with $4.7 billion in new spending. The National Party are still keeping the powder dry, promising just $2.5 billion of new spending over the next Parliamentary term.

The Maori Party are still yet to release their manifesto, so the costings to date only include IwiRail – estimated at $1.6 billion. ACT is the only party who have promised a net cut in government spending. Its manifesto would see a reduction in spending of $5.4 billion over the next three years.

Last month Labour released results of its own polling to show it was doing better than public polls.

There’s been no release of its own since the 1 News Colmar Brunton poll:

Since the last poll in late May, Mr Little has dropped to fourth behind Bill English, Winston Peters and deputy Labour leader Jacinda Ardern.

Mr Little’s popularity fell by three points to five per cent while Mr Peters jumped four points to 11 per cent.

National dropped two points to 47 per cent, while Labour dropped three points to 27 per cent.

The Green Party and New Zealand First are both up two points to 11 per cent.

The Maori Party is up one point to 2 per cent and The Opportunities Party is steady on 1 per cent. . .

This isn’t an optimal poll for National but it’s far worse for Labour which would only get to 61 seats in a 122 seat parliament with the Green Party and NZ First.

It would only get a majority with Maori Party support as well and that wouldn’t be a recipe for the political equivalent of happy families.

This is only one poll but it continues the trend of low levels of support for Labour and its leader.

That the party hasn’t released its own polling suggests that those results are at least as dismal for it.

The release of a party list ought to be a well managed positive PR opportunity.

The seeds of trouble were planted months ago with rumbling’s over leader Andrew Little’s promise of a winnable list position for Willie Jackson.

Another trouble sprouted a few days ago when sitting list MP Sue Maroney announced she would stand down at the election because she wouldn’t have a winnable list position.

This confirms my contention that Labour’s anti-employer sentiments are based on its own mishandling of its people.

On the heels of Maroney’s announcement, the release of the list was delayed because Jackson had a tantrum.

This raises more questions about Little’s judgement and leadership.

Ironically Jackson’s chances of winning will increase if Labour’s sitting MPs in Maori Electorates, who chose not to be on the list, lose their seats to the Maori or Mana Parties.

Barry Soper sums it up:

. . .The first public fallout from the current Labour list preparation was the paid parental leave campaigner, 12 year veteran MP Sue Moroney who was a Cunliffe supporter, who said she’d lost the support of the party’s ruling council who’d given her an unelectable position so she’s quitting.

One would have thought before Labour made public when it’d be announcing its list, it would have ironed out those who could have been disgruntled with it. Yet again they’re spilling their guts in public, being forced to delay their announcement until this morning to give them time to either placate Jackson or to send him up the political creek without his waka. . .

Prime Minister Bill English has announced that the general election will be held on September 23rd.

He’s following the example of his predecessor John Key who announced the date early.

This gives certainty for everyone about when the regulated period before election day starts, makes it easier for the people who administer the process and takes the politics out of setting the date.

September 23rd is the first day of school holidays but with the freedom for anyone to vote early that shouldn’t be a problem.

He also spoke of which parties National could work with in the next term should it be in a position to lead a fourth government:

“Under MMP elections are always close so we will be taking nothing for granted as we campaign for the right to lead New Zealand for another term,” says Mr English.

“We will be fighting hard to win every party vote to ensure we are in the best possible position to form a strong and stable Government that continues to deliver for all New Zealanders.

“However, MMP means we will almost certainly have to work with other parties.  This will likely be in the form of confidence and supply agreements, which have worked well for us in the last three terms.”

Mr English said his preference is to continue working with current partners –  ACT, United Future and the Māori Party.

“Together our parties have provided a stable and successful government at a time of great uncertainty in many parts of the world,” says Mr English.

Mr English ruled out working with the Labour-Greens grouping.

“They are an increasingly far left, inward looking grouping, with no new ideas who don’t back New Zealanders to succeed.

“New Zealand First is an unlikely partner, however I am prepared to have discussions with them post-election depending on the makeup of Parliament,” says Mr English.

If getting attention was the goal of Labour and the Green Party with their memorandum of understanding they’ve succeeded.

However, attention doesn’t necessarily translate into votes and this strategy could well lose more votes than it gains.

All parties need to keep their core supporters happy, that’s the foundation on which they build electoral success .

All but the most deluded of Greens will understand that if they’re going to be in government it will be a Labour-led one so this arrangement is unlikely to worry them and may even please them.

But the Green Party is on Labour’s left flank and the harder left in Labour might welcome the MoU but the more moderate among its members might be less happy.

On current polling these two parties together still won’t gain enough votes to govern without at least one other party. The Maori Party could go left, but a Labour-Green government will almost certainly need more than the couple of of extra seats that would give them.

That plays into the hands of Winston Peters who is likely to hold the balance of power and who refused to go into coalition with Helen Clark’s Labour-led government if the Green Party was in the mix.

Peters’ past behaviour isn’t necessarily a reliable indicator of what he’ll do in the future. Some of his socialist policies would be more at home in a Labour-Green government than a National-led one.

But he won’t commit himself until after the votes are in and he will seize on the opportunity this new relationship provides to gain votes from undecided voters and those luke-warm to Labour who would rather move towards the centre than the left.

Working together to oppose National makes sense for Labour and the Greens but these two together will still be hard-pressed to outdo Peters, the master of opposition politics.

More overt co-operation could make the two parties look more like potentially viable partners in a coalition.

But their pact only benefits them both and their ambition to be in government if the support they gain together is greater than that they are getting separately.

It is difficult to see that happening when the MoU moves Labour left and under MMP the votes which change governments are in the middle.

What makes a good local MP?

Local MPs haven’t been so local anymore since that MMP has decreased the number of electorates and thereby increased their size but that makes availability and commitment to the electorate and its people even more important.

All of this makes me wonder what the people of Northland are thinking if the TV3 poll is right and 54% of them want Winston Peters as their MP when 48% don’t trust him and 9% don’t know if they trust him.

Why would people vote for someone they don’t trust, who doesn’t live in the electorate,  who will be at least as interested in courting the rest of New Zealand as party leader as he is in the people of Northland and who is coming to the end of a political career distinguished at least as much by controversy as accomplishment?

It is even more puzzling when getting Peters as a part-time electorate MP would give more power to both Peter Dunne and the Maori Party.

. . .Those who vote in Northland tomorrow will not remove National from power whatever happens, but they could shift the balance of power in Parliament from Epsom’s David Seymour, who is safely in National’s pocket, to Peter Dunne and the Maori Party. They will be the real winners if Northland elects Winston Peters. . .

And the losers will be all of New Zealand which needs a strong, stable government and the people of Northland who need a good local MP.

Peters standing to give Invercargill MP at Northland’s expense

. . . He said today that standing in the by-election was not an easy decision, but he had a long held concern for “Northland’s forgotten people”.

National had forgotten Northland for years, and the region was stagnating, Peters said. . .

He will be hoping that Northland voters have forgotten, or never knew, about the vagaries of MMP.

Should he win the seat he will become an electorate MP and the next person on NZ First’s list will get into parliament. That’s Ria Bond from Invercargill.

Quite how Peters will persuade the good people of Northland they will be represented by voting him in as an electorate MP with his reputation for talking big and doing little and in the process losing an MP from their end of the country and gifting parliament one from the other will remain to be seen.

Labour has confirmed Willow-Jean Prime as its candidate, and the Act Party will stand Whangarei orchardist Robin Grieve.

The Green Party and the Maori Party are not standing candidates.

If Labour sabotage their candidate in an attempt to unite opposition votes behind Peters it could happen.

Voters often punish the governing party in a by-election and a new candidate usually doesn’t attract the same level of votes a sitting one did.

NZ First didn’t bother standing a candidate in Northland last year. Mike Sabin won the seat for National with 18,269 votes and a majority of 9,300 over Prime who got 8,969 votes.

National members in the electorate will select their candidate tomorrow.