It’s the fourth of July here which is Independence Day in the USA, except it’s only July the third there.

Egypt’s army deployed tanks and troops close to the presidential palace in Cairo on Wednesday after a military deadline for Islamist President Mohamed Mursi to yield to street protests passed without any agreement.

Egypt’s state-run Al-Ahram newspaper reported on its website that the army told President Mohamed Mursi at 7 p.m. (1700 GMT) that he was no longer head of state. It quoted a presidential source.

Meanwhile the state news agency MENA said they would make a joint announcement of a roadmap for a new transitional period and new elections two years after the overthrow of autocratic ex-president Hosni Mubarak in a popular uprising. . .

Hopes were high that the Arab Spring would bring democracy, and prosperity, to Egypt.

Two years later those hopes have yet to be realised.

Happy Independence Day to the USA.

This time last year we were in New York and watched the Macy’s fireworks display from the deck of the aircraft carrier, now museum, Intrepid. 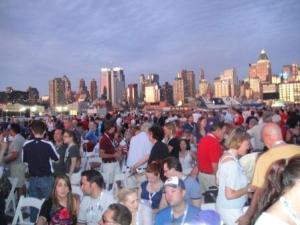 Walking back to our hotel we serendipitously wandered into Don’t Tell Mama which served delicious food.