How Do I Love Ewe?

Jim Mora mentioned the anniversary of the first shipment of frozen meat on the Pre-Panel this afternoon and read a snippet from my ewenique rewriting of Elizabeth Barret Bronwing’s poem:

How Do I Love Ewe? (With apologies to Elizabeth Barrett Browning)

How do I love ewe? Let me count the ways

That lamb tempts the taste buds and any hunger stays.

Of course I love ewe roasted, but still a little rare.

And I love ewe butterflied, from all the bones carved bare.

I love you chopped or diced and threaded onto sticks,

With capsicum and onion to get my vege fix.

I love you minced with salad in a burger bun

And chewing on the chop bones is always lots of fun.

And shanks cooked long and slow for flavour that’s divine.

I love ewe marinated, with mint or coriander,

And many other ways my appetite ewe pander.

Though, proud Kiwi that I am, would be hard to find one keener,

My favourite way to cook ewe is how it’s done in Argentina: 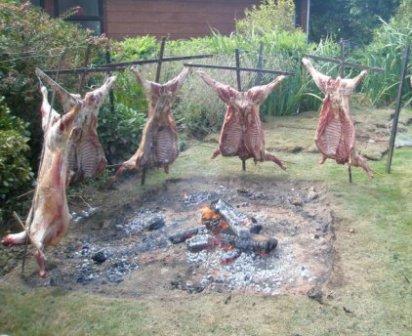 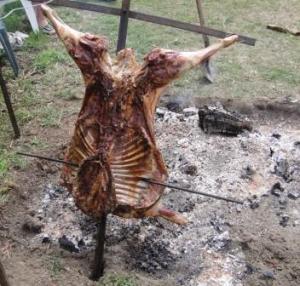 The sheep for that first shipment came from, and were slaughtered at, Totara Estate in North Otago.

It’s now owned by Heritage NZ and is open to the public.

NZ History tells the story of that first shipment here.

A businessman posted a photo on Facebook with a comment. Twenty minutes later he realised it was a stupid thing to do and took down the post.

He also contacted the people to whom it referred, admitted he’d made an error of judgement, accepted responsibility for it, apologised, and made amends by refunding the money the people had paid him. They accepted his apology and the refund.

It should have ended there but someone had a screenshot of the offending post and it went viral on Facebook then became a  not-news story in the mainstream media.

A business sent an email with “your mother sent us her wish-list” in the subject line. A couple of hours later it sent a second email apologising after some customers, including one whose mother had died 16 years earlier,  had contacted them saying they’d been upset by it.

I got the email in a week when Mothers’ Day was going to be particularly poignant owing to the death of a dearly loved friend who was a second mother. I treated it like the marketing exercise it was and deleted it.

I haven’t named either business deliberately because they’ve had more than enough publicity over matters that should have had none.

Jim Mora referred to this being the age of umbrage on The Panel on Friday,

He was right. Too many people are taking umbrage at things which aren’t, in the grand scheme of things, important and because of social media they get far more attention than they deserve.

These two examples are relatively petty but there’s a third more serious one:

One Seven Sharp, host Mike Hosking added his opinion to a clip on the abuse New Plymouth mayor Andrew Judd received for proposing a Maori ward for local government councils.

He went on to say: “There’s nothing wrong with Maori representation on councils cause any Maori that wants to stand for a council is more than welcome to do so and you can sell your message and if you’re good enough you’ll get voted on.”

You can agree or not with his view but several took umbrage at it:

In a statement Radio New Zealand received from TVNZ, a spokesperson for the broadcaster said a formal complaint had been laid against Hosking and a committee would review the complaint in the coming days.  . .

One complaint on Seven Sharp Facebook page came from a medical student called Kera May.

“Deeply offended by the racism exhibited by Mike Hosking on your show tonight. If anyone is “out of touch with Middle New Zealand” (which includes many Maori like myself thank you very much!) it’s you Mike.” . . .

Hosking’s comments have been condemned by his own colleagues Miriama Kamo and Scotty Morrison on TVNZ show Marae.

Kamo said the comments had upset her and told of her own struggles with a previous employer firing her when she corrected him on the pronunciation of her name.

Sacking for that would be grounds for unjustified dismissal but the example as explained here is not in itself racist.

Lots of people find lots of names difficult to pronounce but that’s nothing to do with racism.

I’m called Ele because it’s preferable to dealing with mispronunciations of Elspeth which have ranged from, and I kid you not, albatross to Elizabeth.

Racism is abhorrent and anyone is justified at taking umbrage at it.

But attempting to stifle debate by taking umbrage at someone’s opinion, correct or not,  and calling it racist is ridiculous.

I think Maori seats in parliament have generally served Maori poorly and I would oppose any attempt by a local body servicing an area where I was a ratepayer, to give seats with voting rights to anyone who hadn’t been elected democratically.

That is an opinion with which some may agree or not, but it is not a racist statement.

Taking umbrage rather than countering an argument is yet another example of emotion replacing reason.

When Neil and Dot Smith chose to move their family from the top of the North Island to well down the east coast of the south is was Northland’s loss and North Otago’s gain.

They were among the first dairy farmers to see the opportunity irrigation on the Lower Waitaki plains presented.

They bought one of the worst, stony, barren, wind swept properties and with hard work and skill have turned it, and other blocks they subsequently purchased, into some of the best.

One son followed his parents into farming, the other Bevan and his wife Monique established the award-winning Riverstone Kitchen on the farm.

The Smiths are not just good farmers, they’re good community people and entrepreneurs too,

They know how to work hard and save hard and nowhere is that better illustrated than in the time and effort they’ve put in to fulfilling Dot’s dream of building a castle.

Now Dot can add author to her long list of accomplishments.

It’s an easy, entertaining and inspirational read which covers her modest, but happy, childhood; overseas travels; marriage; farming, including  through the ag-sag;  other business ventures; more travel, the development of the Riverstone complex and the castle.

Dot’s always worked hard and she’s faced tough times, including the loss of most of her savings in the collapse of Hubbard Management Fund. But in life, and through the book, her irrepressible spirit and sense of fun shine through.

Published by Random House also available as an e-book.

Graham Beattie posts:  Dot – She’s a visionary, an entrepreneur and dreams big in North Otago’s Waitaki Valley  and talks to Mark Sainsbury about the book here.

* Dream of living in castle comes to life

Discussion with Jim Mora on Critical Mass yesterday was sparked by:

Kevin Roberts’ much more positive 10 ways to keep your friends

Discussion with Jim Mora on Critical Mass today was sparked by:

* Here’s what Facebook’s doing to your brain: it’s kind of shocking

* The Most Challenging Dinner Guest Ever: And 5 Delicious Meals To Feed Them (and yes I do understand that allergies aren’t fads, but let’s not the facts get in the way of an alliterative headline) from The Kitchen.Com

Conversation with Jim Mora on Critical Mass this afternoon was sparked by:

Ten words everyone should live by at MindBodyGreen.com

Discussion with Jim Mora on Critical Mass today was sparked by:

These Famous Authors Made It Okay To Commit Grammar No-No’s among whom is one of my favourite poets, e.e. cummings.

What We Can Expect in Gadgets This Year  – I covet the solar rocking chair and the in-wall extension cord.