Common policies isn’t plagiarism but copying a slogan could be and that’s what NZ First has done by adopting it’s common sense as its rallying cry for the election.

Since 2002 when Peter Dunne got the television worm to dance by insisting his policies were common sense, that’s been associated with him and United Future.

Common sense is an appealing slogan but New Zealand First backs it up with policies which have a greater claim to common than sense.

One of these is removing GST from basic food items.

The thought of wiping $15 off every $100 spent on groceries is attractive but it’s not that simple.

Not all of the grocery bill is spent on food and the part that is isn’t all spent on basic items – whatever they are and that’s where the problems, and costs arise.

Exactly what is basic and what isn’t requires definition, that’s open to debate and it all adds complexity and cost to our enviably simple and relatively cheap to administer GST system.

Labour tried to sell removing GST from fresh fruit and vegetables at the last election but gained little if any traction. One of the reasons for that was that the biggest gains from that would go to the wealthy who’d save on luxury items.

But the bigger problem with this policy is the cost.

. . . Mr Peters said his policy would save New Zealanders but cost the Crown a whopping $3 billion a year or thereabouts.

“This bold policy aims at the heart of the inequality undermining our society.”

Also “as part of a fair system” NZ First would remove GST from rates on residential property.

“This tax-on-a-tax deceit has to end, and it will,” Mr Peters told around 150 party faithful at Alexandra Park.

He did not provide details on how much that policy would cost, but with local authorities raising more than $7 billion a year in rates, the Crown would lose hundreds of millions of dollars in revenue.

However, in an echo of Labour’s plan to fund its big-ticket items, Mr Peters said the policies would be funded through “a clampdown on tax evasion and the black economy” which he estimated was worth $7 billion a year. . . .

Inland Revenue already devotes a lot of time and money to detecting and clawing back money lost through evasion and the black economy.

Greater effort would result in greater costs and would be very unlikely to result in a fraction of the billions of dollars that would be lost from the tax take if these policies were adopted.

Labour to stick with tax and spend prescription

Labour leader David Cunliffe has ditched the party policy to remove GST from fresh fruit and vegetables and exempt the first $5,000 of income from tax.

The GST proposal was never going to have a significant influence on the price of fresh produce and it would have complicated what is an enviably simple tax.

Cunliffe’s predecessor David Shearer had made this decision when he was leader.

Exempting the first $5000 of income from tax would have reduced churn for poorer people who get it back through programmes like Working for Families but it would also have helped the rich as well as the poor which would be anathema to Labour.

The one redeeming feature of both policies was that they were reducing taxes which would have been a pleasant change for that party.

The reason for the policy change shows Labour hasn’t changed:

The Labour Party is ditching two of its flagship tax initiatives from the last election, giving itself an extra $1.5 billion for alternative policy promises.

That’s our money and shows Labour is sticking to its old focus on tax and spend policies.

The Labour Party has directed its MPs and members to stop referring to the failed policies of the 80s and 90s.

The lack of negative publicity the party attracted from its decision to ditch its 2011 election policy to remove GST from fresh fruit and vegetables has emboldened Labour strategists who are charting a new direction.

“I might have a propensity for overlooking bank accounts, but I can not lead a party which refuses to take pride in its past achievements,” Labour leader David Shearer said.

“I wasn’t in parliament at that time nor during the 1999-2008 when “failed policies’ became part of the Labour lexicon.

“It was stupid then and it’s even more stupid now when it’s obvious that the hard decisions taken were the right ones even though the first ones came from the left.

“Those decisions pulled the country up by its bootstraps so it could stand tall on its own two feet, and the four feet of the cows and sheep to which we owe so much of our export income.

“If it hadn’t been for that we’d be wallowing in the depths of depression with the PIGS.”

Mr Shearer admitted to journalists he faced some resistance from a hard-core within caucus but he was standing firm.

“We’ve had a free and frank discussion and we’re united, on this, or as united as a Labour caucus ever could be,” he said.

The left-outers are a wee bit peeved but the careerists are prepared to put potential jobs before flawed principles and the right, well they’re right behind me.

“Failed policies will no longer be part of the Labour lexicon. Instead, we’re getting ready to deliver shiny new lines.”

Mr Shearer said the caucus wasn’t quite ready to go public with those lines yet.

“We’re still chewing a few dead rats and as it’s rude to talk with your mouth full we’ll have to wait until we’ve swallowed them before we’re able to make any further statements,” he said.

Not intellect but real world experience

The indication this week Labour would jettison one of its flagship items from the 2011 election campaign (the removal of GST on food and vegetables) underlines just how madcap the policy was in the constrained financial conditions in which the Govt has to operate. Until Labour’s younger brigade show they can compete intellectually, the Opposition will continue to trail in the polls.

You could well question the intelligence of anyone who thought that removing GST on fresh fruit and vegetables was good policy.

However, I don’t think Labour’s problem is lack of intelligence, it’s lack of real world experience.

So few of Labour’s caucus have business backgrounds, so many are former unionists or parliamentary staff.

That might have given them more than enough theories but it is no replacement for practical experience in private enterprise.

Quote of the day from Q+A:

CORIN            And are you confident there will be much better decision-making, that these MOM companies, in general, are going to have better board making decisions?

BILL                I think mixed-ownership companies will, but there’s a real challenge for government with the lessons from Solid Energy. When you look ahead, the companies that the government will own all have their challenges – NZ Post with the shrinking postal market, TVNZ and the digital media environment, a coal company if there is still a coal company. And we are going to have to change the way we work with these companies to ensure that we don’t lose taxpayers’ money. Because the taxpayers’ money in these companies doesn’t come out of the sky; it comes from the PAYE and the GST paid by NZ households. And we have a strong responsibility for the stewardship of that money.

How good it is to have a Finance Minister who understands where the money comes from.

When GST was set up in New Zealand it was deliberately kept simple for very good reasons.

Simple taxes are easier to comply with, more difficult to avoid or evade and less expensive to administer.

The problems which can occur when you start making exceptions are clearly seen in Britain where pasties straight from the oven or cooling naturally will be exempt from a Budget VAT increase but those kept warm will still incur the extra 50p.

It must be all very confusing for those selling food and their customers but Lizzie Fournier from City FM has come up with a chart to help them: 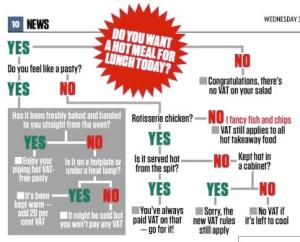 If you click on it you’ll get a more legible version.

Labour here has sensibly back-tracked on its election policy to take GST of fresh fruit and vegetables. Let the mess in Britain be a lesson to them any others who want to tinker with GST.

I’m loath to call any tax good, but simple ones are definitely better.

A survey shows most respondents resent a surcharge on credit cards:

The survey, commissioned by public relations agency Impact PR, investigated the habits of Kiwi consumers and their perceptions of having to pay additional credit card surcharges.

The research showed the vast majority (90%) of customers would stop shopping at their regular store if a 3% credit card surcharge was added to their purchase.

Businesses have to pay a commission on credit card transactions so they’re just passing the cost on to the customers who’re availing themselves of the service.

However, the issue isn’t necessarily that simple:

He says his New Zealand customers have no additional charges of any kind, whether it’s for payment by credit card or freight.

“What we may lose in margin we definitely make up for in customer satisfaction and repeat purchase. We wanted to create a ‘no surprises’ shopping environment where customers could feel confident purchasing a product without having gone through the whole process only to have charges added on the final screen.”

In New Zealand, unless it’s explicitly stated that something is GST is excluded we know it’s included and we’ll have to pay the price that’s stated.

When travelling I find it frustrating to see or be given a price then find it costs more because the price given doesn’t include taxes and other charges.

Nobody likes being charged more than the quoted price and most of us do have a choice of using cash or EFTPOS rather than a credit card if we don’t like surcharges.

However, rather than imposing a surcharge businesses could turn a negative for credit card users into a positive for others by pricing everything at 3% more then offering a discount for cash or EFTPOS.