When Neil and Dot Smith chose to move their family from the top of the North Island to well down the east coast of the south is was Northland’s loss and North Otago’s gain.

They were among the first dairy farmers to see the opportunity irrigation on the Lower Waitaki plains presented.

They bought one of the worst, stony, barren, wind swept properties and with hard work and skill have turned it, and other blocks they subsequently purchased, into some of the best.

One son followed his parents into farming, the other Bevan and his wife Monique established the award-winning Riverstone Kitchen on the farm.

The Smiths are not just good farmers, they’re good community people and entrepreneurs too,

They know how to work hard and save hard and nowhere is that better illustrated than in the time and effort they’ve put in to fulfilling Dot’s dream of building a castle.

Now Dot can add author to her long list of accomplishments. 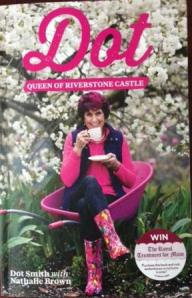 It’s an easy, entertaining and inspirational read which covers her modest, but happy, childhood; overseas travels; marriage; farming, including  through the ag-sag;  other business ventures; more travel, the development of the Riverstone complex and the castle.

Dot’s always worked hard and she’s faced tough times, including the loss of most of her savings in the collapse of Hubbard Management Fund. But in life, and through the book, her irrepressible spirit and sense of fun shine through.

Published by Random House also available as an e-book.

Graham Beattie posts:  Dot – She’s a visionary, an entrepreneur and dreams big in North Otago’s Waitaki Valley  and talks to Mark Sainsbury about the book here.

* Dream of living in castle comes to life

Who dun the whodunnit?

A conversation with a friend turned to someone we both know who, my friend said, had written a couple of books using the pseudonym Alix Bosco – Cut & Run and Slaughter Falls.

On the strength of the friend’s recommendation and knowledge of the writer’s other work I bought the books but they’re still on my books-to-read shelf.

However, I’m even more keen to read them now because Cut & Run has won the inaugural Ngaio Marsh Award for New Zealand Crime Fiction.

Meanwhile speculation is rife on who dun the who dunnit.

Graham Beattie posts on the award ceremony and has previously asked who the hell is Alix Bosco?

These books are completely different from the author’s other work which is probably the reasons s/he wants to remain anonymous. I don’t know her/him well but I suspect s/he is amused at some of the wild guesses at her/his identity.

Update: Joan Druett has another guess.