Bringing a steam train from Dunedin was a popular idea with the 400 seats on offer snapped up by people keen to enjoy the journey and the destination.

When I went into Oamaru around midday yesterday businesses in the town’s historic precinct was ready and waiting for the passengers.

But while the idea was popular it wasn’t such a good one in the middle of a very dry summer.

Firefighters are battling a cluster of large scrub fires stretching for kilometres south of Oamaru.

The fires, which began about 2.30pm, were believed to have been sparked by a vintage steam train on an excursion from Dunedin, passengers on board said.

There were four helicopters by late afternoon and friends were busy dampening down hot spots on their boundary and spraying canary seed to keep it wet.

The worst appears to be over now but it will be a nervous night for people near the line.

Stuff has more on the story and photos here.

Saved from fire by timely visit

Fire fighters and electricians keep warning us not to leave appliances running when we leave home and I’m usually very careful about following that advice.

In spite of that we came home after a weekend away a couple of weeks ago to find the dishwasher making strange noises and a light flashing on it.

I turned it off and called an electrician.

He still hadn’t turned up when I left home last Thursday and my farmer turned the dishwasher on again. It made strange noises and the light flashed so he turned it off again.

He left home on Friday and our daughter came home the next day to find the dishwasher on, making strange noises, the light flashing and a very hot smell. She turned it off at the wall and unplugged it.

The electrician turned up on Monday, diagnosed reasonably serious malfunctions and said it was lucky one of the problems was the pump. That had meant there was water round the hot bits and our daughter had turned up before it evaporated.

Had she not made this timely visit we’d probably have come home to charred remains.

As it is we’ve had a lucky escape and a reminder to follow the advice not to leave appliances running when you leave home.

More to burn will burn more

The ODT confirms that the fire we witnessed near Butchers Dam yesterday (two posts back) was on conservation land.

About 20 hectares of the 813 estate was burned.

Shingle Creek farmer Jack Miller said the fire was “something that was just waiting to happen”.

The ungrazed conservation estate was a fire risk, he said.

“And when you lock up vast amounts of land like this, it becomes a huge fire risk for everyone,” Mr Miller said.

. . . the fire risk and the dryness of the property was the same whether it was conservation land or farmland.

Who owns the property has no impact on how dry it is but that’s not the only factor which adds to the danger of fire.

Farmed property is grazed. Most land under DoC management isn’t and at this time of year it’s covered in dry grass and scrub which provides more fuel for fires.

If there’s more to burn it will burn more.

Fire engines and two helicopters were called to fight a scrub fire near Butchers Dam, a few kilometres from Alexandra, today:

It looked like it had started near the side of the road:

Fortunately there wasn’t much wind and the dam was near by to supply water: 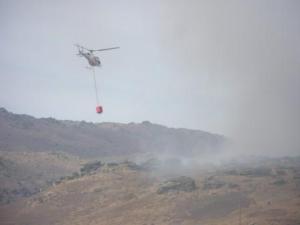 Locals say it is DOC land and they had been concerned about the fire danger from uncontrolled growth on it. 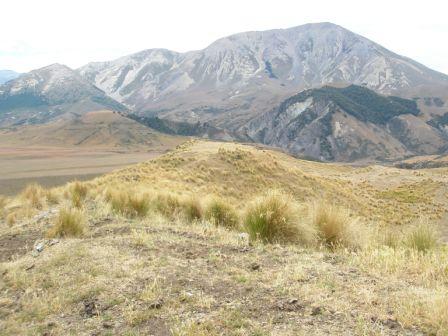 Whether this  is iconic New Zealand landscape which should be in public ownership and under public control is a matter of opinion.

The previous government thought so and took an aggressive approach to retiring much of the South Island high country from pastoral farming and putting it under the care – and I use that term loosely – of DOC.

This property is privately owned by people who graze it and undertake extensive weed and pest control. A lot of the neighbouring property was surrendered during the tenure review process and instead of being actively managed by pastoral lessees it’s being passively managed by DOC.

That means pest control is largely left to hunters who are given licences to shoot given areas. Their aim is sport not the good of the land, so many selectively cull to ensure enough pigs, deer and other animals will survive to breed so they have something to kill next time rather than aiming to eradicate them.

Weed control doesn’t seem to be happening at all as the land is left to revert back to its natural state.

But natural now isn’t the same as natural before people arrived so introduced species like gorse, broom and hyracium are winning the battle with tussock and other native plants and also increasing the risk of fire.

The photo above was taken in North Canterbury last Wednesday and it was very dry but grazing and weed control have kept the growth down. The growth on the neighbouring land has gone unchecked and it’s a significant fire hazard.

Misguided regulations on tree planting and conservation are thought to be party responsbile for the dreadful loss of life and property from the Australian bushfires.

There are fewer people and animals in the South Island high country, but they, the buildings and the land are also at risk  because of policies based on emotion and politics not science.

P.S. In related posts on the Australian fires  Not PC  found a house that was saved when the law was ignored and one which was lost because it was obeyed; Poneke says green lobby demands were partly to blame for the fires and Solo asks can we get angry now?

Fire kills in the south, floods kill in the north

Today’s high temperatures, accompanied by strong winds, have set the fire danger on much of the east coast to extreme.

But in Australia it’s not just a risk, bush fires are raging across Victoria.

A friend whose house burned down years ago said the greatest loss was of photos and treasures, not necessarily valuable in a monetary way but because of personal associations.

However, those are only things and can’t be compared with loss of life and 76 people are now confirmed dead as a result of the Victorian fires.

Kevin Rudd said hell and its fury  had been unleashed on the state.

At the same time, in a tragic irony, Queensland is under flood.

More than 60 per cent of Queensland is under water – 1 million square kilometers, or twice the area of Spain. Ingham has been hardest hit, with 2,900 homes damaged or flooded in a weekend storm and hundreds of people evacuated.

The main cities on northern Queensland’s coast, Townsville and Cairns, were flooded in January storms and are still receiving daily rain. The main highways to Townsville were cut off by water this week and some northern towns have been isolated for weeks.

The devastation is not restricted to property, three people are missing, including a five year old who it is feared was taken by a crocodile.