Dan Mitchell asks which country has the worst dependency ratio and shows how many strangers each worker supports: 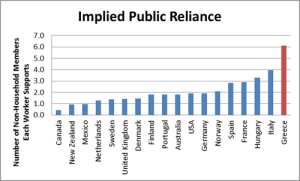 And the percentage of people reliant on public funding:

New Zealand compares well on these measures but it’s not something about which we can be complacent.

If it wasn’t for the policies of the 80s and 90s, which too many still regard as failures, we’d be at the other end of the graph with Greece.

Mitchell also has a couple of pictures which illustrate  the rise and fall of the welfare state.

. . . The welfare state starts with small programs targeted at a handful of genuinely needy people. But as  politicians figure out the electoral benefits of expanding programs and people figure out the that they can let others work on their behalf, the ratio of producers to consumers begins to worsen. . .

The challenge is how to help the genuinely in need without encouraging entitilitis.

It is very difficult to draw a line which provides enough for everyone in genuine need without gathering in those who could, and should, be looking after themselves.

Add children into the equation and it becomes harder still.

It takes a multi-pronged approach to ensure children get what they need while not letting parents abrogate their responsibilities.

It must also be done in a way that doesn’t get the balance between consumers and producers get out of kilter by allowing the burden of dependence to become too great for those who fund the support.

That’s why the Government’s data-driven approach to social support, addressing the causes and funding what works is far better than Opposition policies which measure success by how much is spent, not by whether it would make a positive difference.