The merino wether Shrek which went from hermit to hero died today.

Shrek was found by Ann Scanlan in a cave on Bendigo Station during a muster. His immediate fame was due to the marketing nous of station owner John Perriam and this photo taken by Stepehn Jacquiery a phototgrapher with the Otago Daily Times who was holidaying near by: 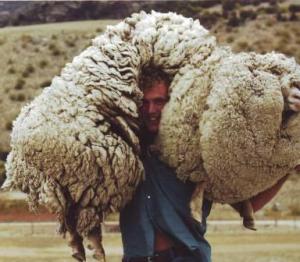 In his book Dust to Gold * John explains how the photo was a happy accident:

‘That’s about all I can do,’ he said as he started to put his camera away. Then Digger (who Cage had nicknamed Jack Russell, because he is small) said, ‘I bet you can’t carry that thing over your shoulders, Cage.’

Cage gave him a look of disdain then, taking up the challenge, reached down and picked up Shrek, pulling him over his shoulders. Few men have the strength to carry a 46 kg sheep, and Cage beamed down at Jack Russell as he walked across to the trailer . . .  Meanwhile Stephen, seeing the photo opportunity, had desperately pulled out his camera again, just in time to get the shot that would go to every corner of the globe. . .

The ODT and other major papers in New Zealand published the photo on their front pages. Then Reuters picked it up and within 24 hours Shrek and Cage were gracing papers and websites all around the world.

This resulted in publicity for Shrek, merino wool, and high country farming which money couldn’t buy. John and his late wife Heather also realised there was a fundraising opportunity. It started with the live-filming of the shearing of Shrek’s 27 kg fleece. Other publicity and fundraising appearances followed, raising hundreds of thousands of dollars for Shrek’s chosen charity, Cure Kids.

* Dust To Gold, the inspiring story of Bendigo Station, home of Shrek, by John Perriam, published by Random House 2009. All royalties from this book and Shrek the story of a Kiwi icon go to Cure Kids.