One of the country’s greatest sportsmen, David Fagan,  has never been recognised in the Halberg awards and Jamie Mackay is launching a crusade to change that:

. . . At the time of writing the five times world champion had won a staggering 634 open-class shearing finals, not to mention the odd junior, intermediate and senior title he picked up along the way as he honed his craft.

By the time you read this that tally could well be 635 since he was a hot favourite to win the Southern Shears in Gore. With no Rowland Smith and John Kirkpatrick to contend with this season he’s looming large to win his 17th Golden Shears title at Masterton and do likewise for the 17th time in his swansong at the NZ Shearing Championships at Te Kuiti.

If Fagan is successful at either of the aforementioned events then surely he qualifies to be recognised in the 2015 Halberg Awards.

Fagan did win the Southern Shears in Gore at the weekend.

He also won the speed shearing competition at the inaugural Hilux Rural Games in Queenstown at Waitangi Weekend.

Even if he doesn’t win anything else this year, surely his skill, athleticism, his 635 open-class titles, including five world championships and his 16 Golden Shears titles should qualify him for an award.

He’s not just a champion, he’s a good sport and he’s willing to share his skills. He was working in sheds around Southland before the Southern Shears, teaching up and coming shearers.

Sport is defined as an activity involving physical exertion and skill in which an individual or team competes against another or others for entertainment.

That should cover shearing.

Anyone who doubts it, should read Bulibasha by Witi Ihimaera. It has the most exciting sporting commentary I’ve ever read and the event was a shearing competition.

That shearing is also an occupation should be irrelevant – lots of other sports people are also paid to do what they do.

Shearing is a sport.

Fagan is one of New Zealand’s greatest sportsmen and he should be eligible for recognition at the Halberg Awards.

If the rules don’t allow his inclusion in existing categories then a special category that acknowledges his achievement should be made.

Bulibahsa  by Witi Ihimaera is the story of a family feud.

One of the most memorable passages is a description of a shearing competition which is the most exciting sports commentary I’ve ever read. 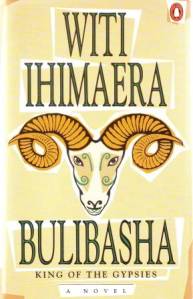 Day 8 in the post a day for New Zealand Book Month challenge.

Deborah at In A Strange Land is reading My Cat Likes to Hide in Boxes by Eve Sutton, ilustrated by Lynley Dodd.

Winning a national sporting title is a great accomplishment.

Doing it for the 16th time and at the age of 47 as David Fagan has done with the Golden Shears is a stunning tribute to fitness, skill, dedication and determination.

I hope the people who select finalists for the Halberg Awards  take note.

And if you don’t think shearing is sport, read Witi Ihimaera’s  Bulibasha. I’ve never been gripped by any other sporting commentary as I was by the one in that book.

New Zealand’s premier shearing team, the Shear Blacks, has returned from the World Championships in Norway with four of a possible six titles.

With the help of an AMP scholarship, Mr Avery spent a month in Norway getting to know the local sheep.

“There lamb is like half as big again, like 50 to 60 kilos,” he says. “And they are crazy to shear they are kicking all the time. Even when you are sitting down at the end of a day shearing, sitting on the couch watching TV, you find your muscles are all tense and you’ve got to try and make yourself relax.”

Mr Avery was part of a team which won four out of a possible six titles. The team’s organiser says the results prove shearing is now a New Zealand sport in its own right.

“We have been funded by SPARC,” John Fagan from Shearing Sports NZ says. “Being an Olympic year this year, they didn’t fund us. But we are recognised as a sport.”

WHile I’d admired the skill and fitness of shearers I’d never really appreciated shearing as a sport until I read the account of a Golden Sheras final in Witi Ihimaera’s novel Bulibasha.

Ah well, we didn’t win the rugby in Sydney, but our shearers had a 3-0 whitewash in a test series in Wales.

The team, comprising Golden Shears and New Zealand championships winner and runner-up John Kirkpatrick, of Napier, and Paul Avery, of Toko, near Stratford, won the final test by just a point in a close and exciting 20-sheep duel at the Corwen Shears, in north Wales at the weekend.

They had scored a 10-point win the opening test at Lampeter the previous weekend, and a one-point win in the second test at the Royal Welsh Show on Thursday.

Avery, who won both the Golden Shears and New Zealand titles in 2007 before bowing to Kirkpatrick in this year’s event, completed a remarkable series of individual wins on tour by claiming the Corwen Shears open title, with Kirkpatrick second and King Country icon David Fagan third.

Shearing is often overlooked as a sport, but there is no doubting the fitness and skill of the competitors nor the excitement of a close match. Although I didn’t really appreciate this until I read the commentary of a Golden Shears final in Witi Ihimaera’s novel, Bulibasha.