Cacocracy – governmental rule by the worst, the most despicable people.

A considered refutation of the farm emissions tax and the ETS – Alastair Boyce :

Like many New Zealanders I was bewildered by the Jacinda Ardern government media announcement to tax farmers as the primary tool toward meeting Emission Trading Scheme targets. It seemed anathema to me, and I sought alternative perspectives and a reality and fact check.

By chance perspective presented themselves in the form of farming and forestry friends with conservation, hunting and fishing experience. These guys go all the way back to Rob Muldoon and ‘Think Big’. This group have lived and breathed New Zealand’s mountains, bush, streams, rivers, sea, forests and fields.

In the following discourse I have taken the liberty of paraphrasing, interspersing commentary with documentary narrative recorded in notes from our conversations and discussions.

This is referred to as “the water story”. In relation to the Emission Trading Scheme (ETS) the government is providing scant consideration of this valuable resource. Carbon forestry uses considerably more water than farming and in perpetuity (i.e., forever). Hydro electricity generation and efficient farming irrigation are permanent losers. . .

Federated Farmers is clear that farmers should carry out winter grazing in a responsible manner and in no way encourages farmers to break the law. But when pathways are limited and full of roadblocks, people simply become frustrated says Federated Farmers Winter Grazing spokesperson Colin Hurst.

For the last two years, the Government has promised that farmers wanting to undertake winter grazing would have three Pathways available to them, Permitted Activity Pathway, a Certified Farm Plan Pathway, and a Resource Consent Pathway. In March 2021 Ministers O’Connor and Parker, and April 2021 Minister O’Connor promised that the farm plan pathway would be available in 2022 ready for the 2023 winter.

“Despite these promises, the alternative farm plan pathway is not available and is not expected to be ready for some time”.

This ultimately leaves thousands of farmers requiring a resource consent to comply with rules. Ministers have delayed the Winter Grazing regulations twice in recognition of the alternative farm plan pathway was not ready. Federated Farmers called for the regulations to be delayed until the farm plan pathway was available to farmers to avoid the enormous consent burden on councils and farmers. . .

Random sample weigh-up today of some new-season lambs from the late twins mob. Singles (not weighed today) will be better than this. Few more weeks then away. pic.twitter.com/0rYF54M6PS

Despite a positive forecast for global sheepmeat and beef demand, an increase in farm expenditure and inflation could significantly reduce farmers’ profit margins.

He says beef cattle pricing in particular will drive revenue for the season. . .

The results are now in from the National Butchery Awards which took place today at the Due Drop Events Centre, in Auckland.

Brad Gillespie from New World Rototuna in Hamilton has won the prestigious Pact Packaging Young Butcher of the Year title and Rhys Tamanui from Waipawa Butchery in Hawkes Bay was crowned ANZCO Foods Butcher Apprentice of the Year. The Black Gloves – a team made up of butchers from Australia – claimed victory at the Pure South Master Butcher Teams’ Challenge.

Brad says he is beside himself with his win. “The talent was outstanding today and to take out the win is just amazing. I am always keen to do my business proud so to finally tick off winning the Pact Packaging Young Butcher of the Year is incredible.”

Finalists were chosen from four regional competitions held during September in Auckland, Hamilton, Wellington and Christchurch, involving over 40 competitors. The final six included wild card entries in each category and with knives sharpened and bandsaws humming, competitors put on a spectacular battle of the butchers while friends and family looked on. . .

Alun Kilby crowned 2022 Young Winemaker of the the Year :

Congratulations to Alun Kilby from Marisco in Marlborough for becoming the 2022 Tonnellerie de Mercurey NZ Young Winemaker of the Year.

Alun, 28, is Production Winemaker at Marisco. He has worked in the New Zealand wine industry for 13 years from Auckland to Central Otago before settling in Marlborough and is thrilled to take out this prestigious title. He is passionate and driven and says he is committed to continuously improving the way we make wine and distribute it to the world.

Congratulations also to Georgia Mehlhopt from Greystone for coming second. Georgia is the first person from North Canterbury to compete in the National Final and did herself and her region proud.

Four talented young winemakers from around the country competed on Thursday 3 November at Kim Crawford winery in Blenheim. The other contestants were Douw Grobler from Trinity Hill in Hawke’s Bay and Eliana Leal from Amisfield in Central Otago. . .

The world population will hit 10 billion around the year 2050. We must use our farmland efficiently in order to feed everyone, and one solution is to employ autonomous robots.

One of these robots is an “intelligent sharpshooter” that can distinguish crops from weeds — and then it shoots them with the appropriate treatment. Because of such high precision, the robot uses 95% less chemicals than traditional sprayers.

The robot also scans the entire farm and is able to geolocate each plant accurately within centimeters.

One of the arguments for taxing methane emissions from cattle, deer and sheep is that it will enhance New Zealand’s global reputation and help gain better prices for our meat.

That’s not what these people think: 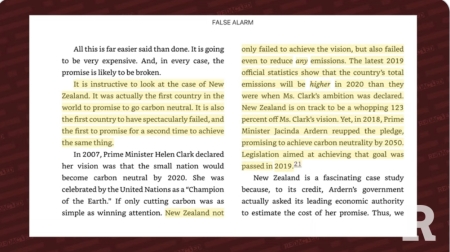 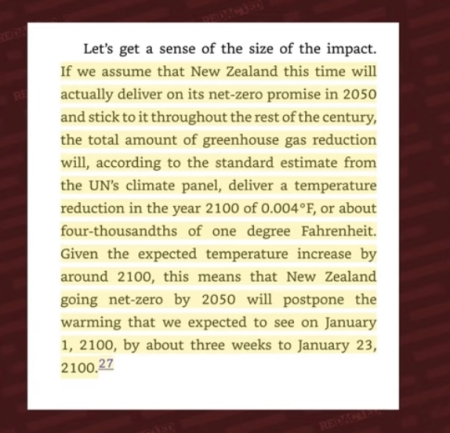 The government is threatening to introduce policies that will kill-off one in five sheep and beef farms, lead to the loss of around 13,000 jobs and reduce export income by billions of dollars and for what?

To postpone warming by about three weeks.

We need research and science not expensive virtue signaling.

Not what farmers think

Audrey Young has given Damien O’Connor the highest mark in her annual cabinet ratings:

Outstanding year. Another FTA under his belt with EU–NZ deal concluded after UK-NZ deal last year. Important role in setting climate change policy in agriculture. Chairing CPTPP next year. Ageists may expect him to retire but why should he when he is at the peak of his career? Previously 9 . .

That isn’t what farmers think.

The UK trade deal is a good one but the EU one is not.

It looks like it was rushed through to give the government a good headline while the PM was in Europe.

It would have been far better to have continued negotiating than to have accepted this deal.

Whatever his role in setting climate change policy was, it hasn’t been good for farming, farmers, rural communities or the country.

Butchering He Waka Eke Noa would, by the government’s own figures, kill off one in five sheep and beef farms with consequent loss of jobs and export income that will make the ag-sag and share market crash of the 80s look like good times.

If there was any advocacy from the Minister on unblocking the immigration pathway for agricultural contractors and farm workers it hasn’t been effective.

New Zealand has agreed a declaration along with other members of the Organization for Economic Co-operation and Development (OECD) that commits members to working together to boost sustainable agriculture and food systems, Agriculture Minister Damien O’Connor said today in Paris.

The ‘Declaration on transformative solutions for sustainable agriculture and food systems’ was adopted at the OECD Committee for Agriculture on 4 November. . .

“The Declaration will see OECD countries identify opportunities and challenges facing food production and share ways to tackle them.

“It includes ensuring food security and nutrition for a growing global population, along with addressing environmental challenges in an inclusive manner. . .

How does the goal of ensuring food security align with his government’s determination to tax farm emissions that by their own modelling will reduce food production so drastically?

If farmers had been rating the Minister he’d have got a very generous, not achieved.