Allyship –  the status or role of a person who advocates and actively works for the inclusion of a marginalised or politicised group in all areas of society, not as a member of that group but in solidarity with its struggle and point of view and under its leadership; the state or condition of being an ally; supportive association with another person or group; such association with the members of a marginalized or mistreated group to which one does not belong.

This is Dictionary.com’s word of the year:

Our addition of the word allyship to our dictionary in 2021—not to mention our decision to elevate it as our top word for the year—captures important ways the word continues to evolve in our language and reflects its increased prominence in our discourse.

Allyship acts as a powerful prism through which to view the defining events and experiences of 2021—and, crucially, how the public processed them. It also serves as a compelling throughline for much of our lexicographical, editorial, and educational work across Dictionary.com and Thesaurus.com this year. . .

Monkees singer and guitarist Michael Nesmith, whose band topped the charts in the 1960s while the quartet starred in a lighthearted TV show, has died, his manager said Friday.

The Monkees grew in popularity after the group starred in “The Monkees” TV show about a rock ‘n’ roll band. The comedy debuted on NBC in 1966. Nesmith was easily recognizable on the small screen because of a trademark wool cap. . .

Nesmith was known as a talented songwriter. His credits with the Monkees included “Mary, Mary,” “Papa Gene’s Blues,” “You Told Me” and “You Just May Be the One,” Variety reported. . .

A man who dedicated his whole working life to the meat industry died suddenly on December 5.

Tim Ritchie, 71, made an outstanding contribution in his many roles in the industry over more than 40 years working for Government, the private sector and the Meat Industry Association and its predecessor, the Freezing Companies Association.

After completing a Bachelor of Agricultural Science degree in marketing and economics at Lincoln University, Ritchie embarked on a wide ranging international career in the red meat sector. He started off at Treasury but then moved to Towers International and then to Waitaki International, both in NZ and overseas. Ritchie told Rural News just after his retirement last year that working for Waitaki in London was the highlight of his career

“There as a 30 something year-old my job was to manage the Waitaki operation in the UK and Europe,” he said. . .

It’s time to imagine New Zealand without production animals. Anti-farming lobbyistsprobably don’t mean this to be the outcome of their activities, but outcomes are difficult to predict, even when the predictor is an expert in the appropriate discipline.

Lobbyists are experts at getting noticed in the media. The negative coverage of agriculture this month has been extraordinary. Anybody who has read the press, listened to the radio, watched the television or gone to a cinema would be forgiven for thinking that New Zealand is an environmental cot case.

The reality is that pre-Covid, tourists rated the environment at the top of New Zealand’s attractions. The Ministry of Business, Innovation and Employment has the data. The reality is also that without dairy, beef and sheep, New Zealanders would not have a first-world and flourishing economy. . .

Fonterra chairman Peter McBride has acknowledged that despite the co-op’s improved performance, many shareholders feel under enormous pressure.

He says the rate of change on-farm, Covid, labour shortages and environmental reforms have pushed many farmers into protest, and others out of the industry.

He told Fonterra’s annual general meeting in Invercargill today that some of that change is being driven by regulation.

“More so, it is being driven by consumer, customer and community expectations,” he says. . .

A cute story to put a wee smile on your face at the end of the week #farmdoglife #pipisachamp #farmingphotoshttps://t.co/Y6g3RLhNuf pic.twitter.com/dwDVt0M2f1

Another day at the office for Pip – Simon Edwards:

Is this one of the best rural photos of the year (even decade)?

It was snapped earlier this week by Pahiatua farmer and Federated Farmers member Nick Perry and has already been seized on by media as a compelling shot.

This is how Nick described what happend:

While crossing a culvert on farm I heard a bleat from beneath me and thought ‘bother there’s a lamb in there’. Knowing full well extracting the lamb might involve getting wet I put off the decision until later in the day. But the bleat was still emanating from the culvert that evening so I selected my two most experienced working dogs, a huntaway and a heading dog, and explained the situation to them. . .

An East Otago egg farming family is giving cropping and cattle finishing a crack in the Maniototo.

The farm is owned by the Winmill family — Jeff and Aileen and their children Nina and Ben.

Jeff Winmill, standing on the steps of the homestead, told more than 80 people at the event, about the purchase and transformation of the farm. . .

It’s set to be a record breaking year for Australian farmers thanks to strong growing conditions and high global prices according to a report from the Australian Bureau of Agricultural and Resource Economics and Sciences (ABARES).

If forecasts are realised, Australia’s agricultural production will reach a record $78 billion in 2021/22, with the most valuable winter crop ever expected worth $22.3 billion.

ABARES executive director Jared Greenville said the good results are expected to be enjoyed across livestock and cropping, with 30-year price highs being experienced. . .

Since wealth is the only thing that can cure poverty, you might think that the left would be as obsessed with the creation of wealth as they are with the redistribution of wealth. But you would be wrong.

Saturday’s soapbox is yours to use as you will – within the bounds of decency and absence of defamation. You’re welcome to look back or forward, discuss issues of the moment, to pontificate, ponder or point us to something of interest, to educate, elucidate or entertain, amuse, bemuse or simply muse but not to abuse. 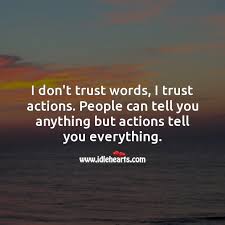 I don’t turst words, I trust actions. People can tell you anything but action tell you everything.