Some people seem to think that the answer to all of life's imperfections is to create a government agency to correct them. If that is your approach, then go straight to totalitarianism. Do not pass "Go." Do not collect $200.

Urban dwellers lack of knowledge of the work farmers do for the environment distressing – Jacqueline Rowarth:

A rat race is an endless, self-defeating, or pointless pursuit. The term was coined in the early 1930s, but in Alice Through the Looking Glass, published in the early 1870s, Lewis Carroll had the Red Queen tell Alice that “here it takes all the running you can do to keep in the same place. If you want to get somewhere else, you must run twice as fast as that”.

That is the point of the “howl of a protest” that was made by the convoy of tractors, utes and dogs last week.

Farmers were expressing frustration at the deluge of regulations and paperwork.

The work they do for the environment is being overlooked. . .

Full of pride for mother in ute with dogs – Anna Campbell:

Climate change is a global problem, a problem shared and a problem far bigger than New Zealand politics.

Climate change is a problem that the majority of farmers recognise, one in which many are adapting to daily in dealing with the increasing numbers of droughts and floods. Farmers are improving their environments by changing their farming practices, whether that be fencing waterways, developing Land and Environmental Plans, planting trees or altering winter grazing practices. Change on-farm is happening at a significant scale across the country.

On Friday, I apprehensively left my centrally heated office to stand in the Octagon and lend my support to the protest — who knew Otago had so many farmers? . .

This might have been our first successful farmer protest – Craig Hickman:

I’ve never made a secret of the fact I’m no fan of farmer protests; there had never been a successful one in my living memory and there has been a tendency recently for them to backfire and paint farmers in a bad light, usually as ignorant racist misogynists.

People fondly recall Shane Ardern driving his tractor up the steps of Parliament in 2003 to defeat the proposed “Fart Tax”. They point to this as an example of a resounding success.

I don’t know how you measure success, and sure the Government of the day appeared to back down, but there’s the small issue that the protest didn’t actually work. While farmers weren’t asked to pay for emissions research via taxation, our industry bodies agreed to pay for it via levies instead, with the Government reserving the right to reconsider the tax should payments ever stop.

Not only is it difficult to measure whether a protest has been successful, they can be harmful too. . .

Six steers grazing my hill block after the water way has been fenced off the complication was Mataura 400mm fresh water main. Gore district council located it for us. Job done ✅ pic.twitter.com/vSM0lU5J9u

Grimes’ grouches with the effects of govt policies on Kiwis’ wellbeing may sting more than the Groundswell protest – Point of Order:

The  Ardern  government may  have been  stirred,  but  it  wasn’t  shaken,    by  the  nationwide protest  by  farmers  last  Friday.  And no matter how  far  the protest may have  turned   heads   in  the  rest  of  the  population,   it  leaves  farmers  no  further   advanced  in  persuading  ministers  to  modify  or  revise  the  policies  which  their  action targeted.

So  if  ministers  won’t  back  down  on their  environmental reforms or their climate change  policies,  where   can  the  farmers  go?  Parade  through  Wellington  to  Parliament?   Mount a 24-hour  vigil  in  Parliament  Grounds?

The little-known world of sheep and beef by-products and co-products:

When you think about meat processing it would be no surprise that the first output you thought about, was food. But what happens to the rest of the carcass? The parts that are not suitable or desired for consumption? That is where byproducts and co-products come in.

With new technology and innovation, the use and application of co-products are constantly developing across a range of industries. Where once tallow was used for soap and candle making, now it is being converted to create a biofuel that burns cleaner and reduces emissions. . . 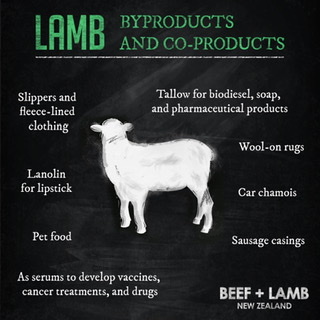 Talk of the Town: How country mums are using social media to shift from the good paddock – Samantha Townsend:

Mum, I don’t want to be mean but I reckon that (weight loss program) will really benefit you. You are like really beautiful but you have a big bottom”.

That’s what my eight-year-old daughter told me at the start of this year while watching television one night.

Now I’ve certainly been in a good paddock and I can’t blame my kids anymore, it’s been six years since nappies.

But it made me think about the power of advertising and social media, and how it influences our lives these days. . .

Minister… the civil service is fully seized of the need for reform and we have taken it on board.

Poverty the problem not exports

Oh dear, people are calling for us to put selling on the domestic market before exporting:

Auckland University of Technology Emeritus Professor of Nutrition Elaine Rush . . has matched data on food and beverage exports and imports to nutritional needs and said what she found was eye-opening.

She said we are exporting high nutrient proteins and fat, and importing foods and these aren’t great from a nutrition stand-point, like carbohydrates and sugars.

That’s because we are uniquely placed to farm grazing animals that produce meat and dairy products and our climate, topography and soils aren’t suited nearly was well to growing sugar cane, grains and cereals.

As a result, we’re fat, famished or starved in a land of plenty, she said.

We’re not fat, famished or starved because we export so much. The problem is poverty and the complex factors that cause that.

In a paper on the topic she suggests: “A country that can produce more than enough high-quality food should feed its own ﬁrst.”

After New Zealanders had enough good quality food, “then we can actually start thinking about looking after the rest of the world as well, because the trickle down effect hasn’t been working has it?”

“All this money we get from these exports doesn’t seem to be making it easier for those at the bottom of the socioeconomic ladder,” she said.

The people at the bottom of the ladder would be even worse off if we didn’t export all we do that enables us to import all we need to be a first world country.

We don’t have that option here but forcing farmers to supply the domestic market would be an act of economic sabotage.

That the poor can’t afford to buy the high nutrient foods we produce, isn’t because we export them, it’s because they’re poor.

Handicapping exports would not solve that and would make the whole country poorer in the process.