Envy used to be just a human failing, but today it is a major industry. Politicians, journalists and academics are all part of that industry, which some call "social justice."

From my observations of general media reporting it seems that in today’s world no one wants to take responsibility for their actions.

And more often than not they seek to blame others for the results of their actions. This is the case for private persons, government and their departments, councils and social organisations in a large portion of reports.

The majority seem to want someone else to take responsibility for their actions or lack of action. Some in government want even more control because they believe the government can fix things through legislation.

The problem with the government growing bigger, passing more legislation (much of it being a form of social engineering) and enforcing that legislation is that it takes responsibility away from the people who should hold that responsibility. . .

Hāwera vet Cathy Thompson always carried a camera in her kit and took photos of many of the interesting animals she dealt with on farms.

Since retiring in 2017, she has used many of them in two books.

“The first one was a practical guide for cattle vets, but I thought it should be made available for farmers too, so I rewrote it,” she said. . .

If only it was opening weekend.

Jokes aside, I am receiving reports of a lot of flooding. Fences destroyed, stock trapped, access blocked.
Stay safe out there folks. pic.twitter.com/4Jv4gxZysS

The potential for a second drought in Northland shows the vital importance of large-scale dams, according to Te Tai Tokerau Water Trust.

The trust was formed this year to help progress water storage projects, helped along with $70 million in Provincial Growth Funding.

Work is expected to start this month on a 750,000 cubic metre reservoir near Kaikohe – one of the towns so severely impacted by drought there was a real risk taps could run dry in February.

However, the reservoir will not be ready for use until the first half of 2021. . .

Maria Lupton has New Zealand’s only leech farm, with tens of thousands of the parasites in tanks on her Waikato property.

If it’s a nice fine spring weekend, then Maria and Robert Lupton know they’ll probably get a call from a hospital asking for their leeches.

The Waikato couple owns a leech farm supplying hospitals throughout the country to help in surgery to restore blood flow to severed fingers or for restorative surgery after cancer treatments.

B+LNZ and OSPRI to improve sheep traceability with electronic ASDs:

Introductions of pests and diseases onto farms can be devastating for businesses and rural communities.

COVID-19 and the response to Mycoplasma bovis has underscored the importance of tracing to find, contain and control infectious diseases.

For sheep, mob-based tracing is an efficient and effective method.  For a number of years, B+LNZ has been seeking to improve the traceability of mobs of sheep.

Current tracing of movements of sheep relies on Animal Status Declarations (ASDs). These are paper-based, which limits investigators’ ability to trace a rapidly moving disease because they must follow the ‘paper trail’. . .

This guy really wants a gig with ABC Rural! pic.twitter.com/UCrUVhYPR0

Across Europe, much of the food and agriculture industry has been badly affected by the Covid-19 pandemic.

Half of the fishermen in the Netherlands have stopped going out to sea. That’s because the price of fresh fish has plummeted due to a lack of demand.

In France, 1,500 tonnes of high quality cheese went off last week, because farmers can’t sell it.

And many of the warehouses that store fresh food across Europe are now reaching capacity.

The Official Secrets Act is not to protect secrets, it is to protect officials.

Popular but not productive

There is no doubting Jacinda Ardern’s popularity, but Tim Watkin writes it is far from matched by her government’s track record:

. . .  In 2017, Ardern rode to victory on a commanding personal performance after her last minute replacement of Andrew Little, a tiring National party and three key policies that a sufficient number of New Zealanders were demanding action on. Housing, poverty and climate change.

In the three years since, the coalition she has led has struggled to get traction on any of the promises its dominant member made on those issues.

With housing, we all know Kiwibuild promised 100,000 houses in a decade and that last year Phil Twyford was sacked as Housing Minister as the party admitted it had failed.

Even in the second leaders’ Ardern was on the back foot over housing, saying again it had tried and failed to rapidly build more houses.

Labour’s housing policy released yesterday admits just 602 Kiwibuild homes have been built as of last month; estimates earlier this year had it taking 400 years to reach its 100,000 target at this year’s rate of building.

We also know that Ardern forever gave up on her promise to introduce a Capital Gains Tax, when she couldn’t win over New Zealand First.

But most people have forgotten another big housing promise – to abolish Auckland’s urban boundary, which Twyford blamed for helping “drive land and housing costs through the roof” and contributing to “a housing crisis that has allowed speculators to feast off the misery of Generation Rent.”

Auckland Council takes a different view and the boundary remains.

Worse, house prices nationally have risen a further 27 percent under a government that promised to fix the affordability “crisis” and this week the average asking price for a house in Auckland topped $1m. Rents are up 3.3 percent on the year to July.

And while more state houses are being built, the number of New Zealanders on the state house waiting list has leapt from 5844 to 19,438.

Prices, rent and waiting list all up and not nearly the 16,000 Kiwibuild houses that were promised to have been built by now.

After a couple of questions about eradication, Espiner doubled back to the core promise.

Espiner: “I just want to clarify, are you committing this morning to lifting 100,000 children out of poverty by 2020?”

Ardern: “On 50 percent of the median income, yes.”

The latest data we have is up until June 2019, which was released in February this year.

So is Labour on track to meet that 100,000 promise when the data for this year is released?

Not even close. As of June 2019, using the 50 percent measurement Ardern herself used (after housing costs), it had got 12,100 children out of poverty.

Labour may argue there is a lag time and that number will have been seen to have skyrocketed when the 2020 data is released.

But it’s worth noting that when the 2019 figures came out, economist Susan St John of the Child Poverty Action Group wrote: “This confirms our view that the Families Package (implemented July 2018) was not designed to give the necessary income boost to those in the deepest poverty. This picture is unlikely to change when the full Families Package is counted in the next report due in 2021.”

This outcome is even worse when the Minister for Child Poverty Reduction is the Prime Minister whose goal to lift 100,000 children out of poverty has so badly failed.

And what about climate change? The issue Ardern famously called her generation’s “nuclear-free moment.”

Labour and the Greens were able to pass the Zero Carbon Act, aiming for zero net carbon emissions by 2050. Yet for now emissions continue to rise and are on track to keep rising until 2025.

A plan for the government’s vehicle fleet to be emissions-free by mid-2025 is now being called a “laughable dream.”

Compared with other countries, New Zealand’s efforts to reach our Paris Agreement goals has been deemed “insufficient”.

At this election, Labour is headlining its promise of 100 percent renewable energy in New Zealand by 2030. We’re already at 84 percent, but it sounds good, right? Because it will lower emissions.

However, the government’s own Interim Climate Change Committee (ICCC) advised against it.

“Such a solution is very costly, particularly in terms of achieving the last few percent of renewable electricity,” the ICCC wrote.

Costly both to your back pocket and the environment.

You see the 100 percent goal could see residential electricity prices rise by 14 percent, the ICCC estimated. And the higher prices would slow the decarbonisation of the economy as a whole, meaning more emissions.

“The Committee recommends that the Government prioritises the accelerated electrification of transport and process heat over pursuing 100 percent renewable electricity by 2035 in a normal hydrological year because this could result in greater greenhouse gas emissions savings while keeping electricity prices affordable.”

Labour has ignored that advice.

Style over substance, emotion rather than science – climate policy that sounds good but will do the opposite of its intention to reduce emissions.

So on its three key issues, Labour has failed to match its own promises and goals. Ardern reasonably points to New Zealand First as a handbrake on housing and climate.

She says her government has “made a good start” on these issues and needs more time. They remain her priorities. But the timeframes she gave were of her own making and she has failed to achieve them.

New Zealanders from today can vote on whether she and her team gets the more time she’s asking for.

As they head to the polls, the track record remains her greatest liability. . .

A picture is worth 1,000 words and this from Kiwiblog shows the government’s record of failure: 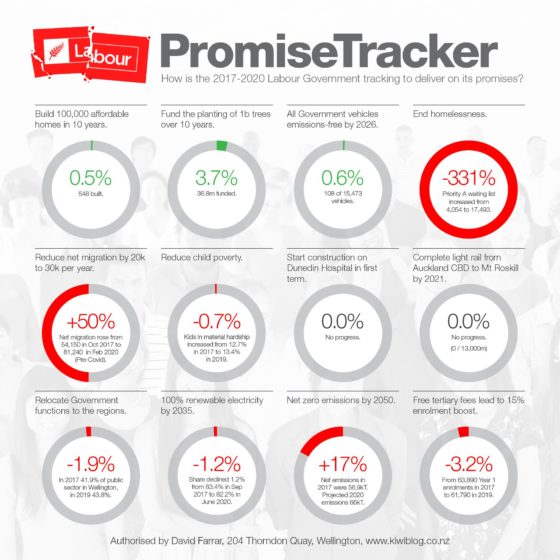 This government has had a popular leader but it hasn’t been productive.

And it’s not only what she and her government haven’t done that voters should consider before inflicting another term of failure on the country, it’s the things they have done but shouldn’t have:

Then there’s the long list of Provincial Growth Fund projects , too many of which have shown it to be a slush fund; and the favouritism shown to overseas buyers who plan to turn productive farmland into forestry.

We couldn’t afford this government before Covid-19 led to the worst economic crisis in decades, we certainly can’t afford another three years of it worsening the debt and delaying the recovery.