When you’re pregnant you have  hopes and dreams for your babies and their futures, dreams you probably aren’t fully aware of unless you lose them.

Some of our dreams were dashed when our sons were diagnosed with degenerative brain disorders and died young, Tom aged 20 weeks, and Dan 10 days after his fifth birthday. 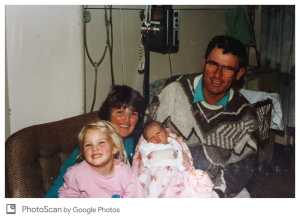 Life with the boys who had multiple disabilities and passed none of the developmental milestones wasn’t easy, nor was coming to terms with their deaths.

Many people who learn about Tom and Dan say they couldn’t cope if that happened to their children. I’d probably have thought the same until I had to. Then, the only alternative to coping was not coping and through necessity, I coped.

That doesn’t mean I always did it well. There were some very long nights and some very dark days; nights when I fell into bed exhausted by grief but couldn’t sleep, days when it felt like I was stuffed full of dark clouds and was ready to burst. But even at the very worst of times I had the love and support of my husband, wider family and friends, shining light against the darkness of despair.

And our sons, who could do so little, taught us so much: how blessed we are to have that support; that people are people regardless of what they can or cannot do and that ability isn’t a right it’s a privilege

Our response has also been governed by the knowledge that it would only compound the tragedy of our son’s difficult lives and early deaths if being bitter and twisted and focusing on what we’d lost stopped us appreciating and enjoying all we still had and could have.

And we still had their older sister who gave us the joys and challenges children provide.

None of those challenges were major until nearly three years ago when she was diagnosed with low grade serous ovarian carcinoma (LGSOC), a type of ovarian cancer that is frequently incurable.  Jane, at just 32 years old, was told with current treatments her life expectancy was likely to be only five to 15 years. 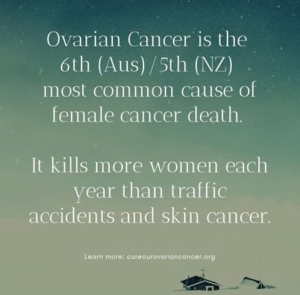 Ovarian cancer is the 5th most common cause of female cancer death in New Zealand. Yet we  knew almost nothing about the symptoms. For two years Jane was told by doctors her symptoms were not serious, right up until she required emergency surgery from cancer complications. You can read more about the symptoms here:

Not letting what we’ve lost with the lives and deaths of our sons, blind us to what we still have is, of course, easier in theory than practice and it has been harder still to focus positively in the wake of Jane’s diagnosis.

There’s been a lot of tears, a lot of prayers and a lot of swears. There are nights of restless sleep when I wake to find the nightmare is real, and days when I cry easily and often. But again we’ve got wonderful support from family and friends, and just as she gave me a reason to not just survive but live a full life when her brothers died all those years ago, Jane’s example is providing an inspiration for me now. 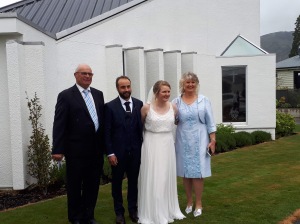 18 months after diagnosis and 8 weeks after breaking her leg skiing.

If it’s hard for me as a mother, how much harder must it be for her,  a young woman living under the cancer sword, facing what it’s already cut from her life, the pain of that and the knowledge that it could take so much more?

She could have sunk into depression and stayed there. She could have chosen to focus only on herself. Instead she is doing much, much more.

She is fighting not just for herself but for all the other women around the world who share her cancer, many of whom are young like her.

What will determine whether women like our daughter live or die is research. Rare cancers like Jane’s, account for almost half of all cancer deaths yet receive just 13.5% of research funding.  The limiting factor isn’t science, it’s the money for the scientists to study it that’s lacking.

When Jane was diagnosed there wasn’t any way to donate directly to her cancer anywhere in the world. She knew that had to change if she and other women were to survive. She liaised with doctors,  researchers and charities around the world and founded Cure Our Ovarian Cancer – a registered charitable trust, that facilitates donations for low-grade serous cancer research both in New Zealand, and internationally. 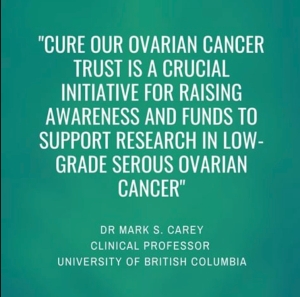 Jane spends most of her days connecting with women and researchers around the world, fundraising for research into her cancer. Through Cure Our Ovarian Cancer and it’s partner charities, she’s helped raise more than $200 000 in less than two years. And aside from a small payment fee, 100% of every dollar raised goes to research.

She’s humbled by the public’s generosity, but also overwhelmed by how far is left to go. Tens of millions are needed if change is to happen in time for her. But as Jane says, “How can I do nothing? Knowing that in 10, 20, 30 years time, women will continue to die in droves without research. You just have to try.”

We’re in awe of everything Jane is doing while living with this awful cancer. It’s heartbreaking but her example pushes us to do better every day.

As a family we are committed to helping in every way we can. We’ve funded three research projects in the US and NZ and continue to do what we can. But this problem is too big for one family to solve without help.

This is why we’re going public. Because our daughter,  and all the other women with this dreadful disease,  need your support.

Our message to you is simple. Please donate, please fundraise and please tell everyone you know about our incredible girl and this horrible cancer. Women’s lives are on the line. 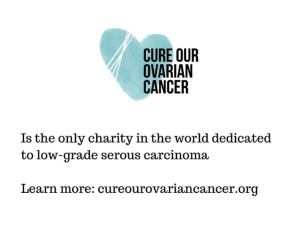 This entry was posted on Thursday, February 13th, 2020 at 7:00 am and is filed under Family, health, life & death, research, science. You can follow any responses to this entry through the RSS 2.0 feed. You can leave a response, or trackback from your own site.

4 Responses to Living under cancer sword