Longinquity – long distance; the quality of being far away, greatness of distance; remoteness.

As temperatures soar and paddocks start to frizzle farmers in Northland are destocking and buying in feed while firefighters are nervously standing by waiting for the sirens to go.

“You could say we are pretty much on edge and on constant standby,” Northland deputy principal fire officer Wayne Martin says.

“Whenever we are called to an event we pretty much throw everything we have got at it to make sure we don’t end up with an Australia-type incident, especially if we have to travel a fair distance to get there. We will send the helicopter out as well to reduce the risk of it spreading and to contain the loss of acreage.” . .

Harvesting 15 tonnes of cabbage in hailstorms and hand weeding paddocks under a scorching sun made a perfect training ground for Austin Singh Purewal.

The 18-year-old, who won the NZ Young Vegetable Grower of the Year award two months ago, says the hard work on the family farm is paying off.

Purewal, the youngest-ever to win the title, told Hort News that although growing up on the family farm wasn’t easy, he enjoyed the challenges. . .

We've been polishing up the Open Farms event profiles this weekend – getting ready for sign-ups in just a few days.

So the farming photos are flooding in & Spring Collective's was our pick of the weekend.

Quiet, humble, nothing too flash, but perfect in it's own way. pic.twitter.com/qR1vagf573

LIC has delivered a steady interim result in line with expectations during the 2020 financial year, including a small rise in revenue and a small drop in first-half earnings.

Revenue in the six months to November 30 was $163 million, up 1.4% from the corresponding period last year.

The artificial breeding and farmer information company said earnings and profit were down because of the timing of expenses. . .

As a child, scientist Dr Shaun Forgie was obsessed with snakes, so it was unfortunate he grew up in one of the few countries in the world that don’t have any. Instead he grubbed about in Ruakaka looking for other creepy crawlies, then completed a science degree specialising in insects.

He had planned a masters on parasitic wasps and their impact on fly strike in sheep. As one does. But one day in the lab, Forgie had a Road to Damascus moment that was to change his life, but could potentially have a far greater influence – producing a major change in New Zealand’s farming ecosystems.  . .

Stunning fleece being judged by NZM's very own Katrina Bishop at the Lake Hayes A&P show earlier this month.

No sausages or salami?! The country-of-origin regulations let pork eaters down – Hilary Pearson:

Finally, New Zealand is getting country-of-origin food labelling. But the recently released draft regulations are a missed opportunity to provide consumers with clarity around where their food comes from and how it’s produced, writes Hilary Pearson of Freedom Farms.

It seems a bit laborious to rehash the already storied history of the Consumers’ Right to Know (Country of Origin of Food) Act. At this point it feels like it’s been talked about for eleventy-seven gazillion years. The bill was passed by parliament at the end of November 2018 and now, 12 months later, draft regulations have been released so we know what it’s going to look like in practice. And it’s clear it’s not as robust as pork eaters need it to be.

In many ways we’ve timed our run poorly in terms of getting this legislation across the line. In 2018, when the bill was going through the select committee stage, some people delighted in telling me that no one really cared that much about how their food is produced, so country of origin wasn’t a big deal.

We’re now 18 months down the road from the select committee consultation and suddenly one in three New Zealanders are reportedly thinking about reducing their meat consumption because of the environmental impact of how it is produced. . .

Rural golf course where sheep graze is teed-up for sale:

A quirky provincial golf course where sheep graze the fairways to keep the grass under control has been placed on the market for sale.

The Tumahu Golf Club near Okato in Western Taranaki is an 9-hole course where players have been driving down the fairways and putting on the greens for some 70 years. As a classic Kiwi ‘rural’ course, sheep graze the fairways, with knee-high electric wire fencing keeping stock off the putting greens.

However, with many Tumahu Golf Club members now aged in their 60s and 70s, the steady decline in core membership has seen the club’s fortunes wane. Big swinging Tumahu Golf Club members played their last club day just before Christmas. The course remained open until just after the start of the new year to allow for holiday golfers to get a final round in. The course has now officially closed down. . . 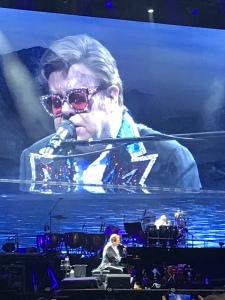 * Thank goodness the people who wanted a roof on Forsyth Barr Stadium prevailed.

It was pouring with rain in Dunedin and it was cold but at least we were dry under the roof.

* The oldies are still the goodies.

The audience had a wide age-range, including people who wouldn’t have been born when Elton started performing 50-odd years ago but young and old were dancing, singing and enjoying themselves.

It was a performance on stage and screen that was aurally and visually spectacular.

That was Elton’s message on what the world needs more of and he’s right.