Convergence – the act, instance, process or state of converging;  the act of moving toward union or uniformity; coordinated movement of the two eyes so that the image of a single point is formed on corresponding retinal areas; the state or property of being convergent; the tendency of unrelated animals and plants to evolve superficially similar characteristics under similar environmental conditions; a location where airflows or ocean currents meet, characteristically marked by upwelling (of air) or downwelling (of water).

"When you know you are of worth — not asking it but knowing it — you walk into a room with a particular power." #MayaAngelou

New Zealand’s waterways are mostly pretty good in terms of being safe to swim in.

Certainly, I know of no deaths or even serious illness directly or indirectly attributed to swimming in a NZ river because of contamination from industrial, agricultural or municipal causes.

The discussion has largely been about contamination from dairy farms and that was driven by Fish and Game, possibly to divert attention from the fact that E coli contamination from water fowl, eg game birds, is very high in some locations.  . .

Serena Lyders, of Tokanui, comes from five generations of shearers, grew up among shearers, is married to a sheep and beef farmer, her three sons are shearers and her 2-year-old granddaughter already has her own miniature woolshed broom.

As a result, Mrs Lyders is passionate about the wool­harvesting industry and the health and wellbeing of its workers.

She is a Manukura navigator leader and mentor, working for Te Putahitanga o Te Waipounamu, which is the Whanau Ora commissioning agency for the South Island . .

Tomorrow we will start A.I on our heifers. Today we have applied a estrotect to all of them for easy heat detection. They will be A.I'd to jersey bulls then go straight out with Murray Grey bulls. We will A.I them for 3 weeks (a complete cycle) then 5 weeks with the bulls. pic.twitter.com/jurvQxXWv7

Farmers are ramping up their campaign to change new firearm laws to allow some of them to use otherwise  banned firearms for pest control on their properties.

The legislation as proposed will compromise the ability of landowners with significant pest problems to do control so Government officials were invited to hear the concerns from some affected Central Otago farmers, Federated Farmers board member Miles Anderson says.

The federation wants an exemption for a small number of farmers who need semi-automatic firearms with large capacity magazines, of the type the bill will outlaw. . .

The world’s first sheep facial recognition software, developed in Dunedin, is set to be prototyped this year.

Sheep NN, a project created by artificial intelligence and machine learning company Iris Data Science, has received a $40,000 grant from Callaghan Innovation towards the $100,000 project that will take the model to prototype by the end of the year.

Iris Data Science was co-founded by Greg Peyroux and Benoit Auvray, who have been working on the project to cheaply re-identify sheep, potentially removing the need for ear-tags while also solving other farm management and broader issues. . .

Zespri tries to whet US appetite :

Research has become a bigger part of Zespri’s marketing mix as it reverts to basics to increase sales in the United States.

The US is a comparatively recent market for Zespri, which has previously looked to China and Japan for growth. The kiwifruit marketer opened a pan-American office in 2017.

A group of Hawke’s Bay women have organised a shearing competition among themselves to raise awareness about mental health in rural communities.

The catch is that none of them – an accountant, a dental therapist, an optical technician, a police officer and a rural insurance manager – have ever shorn before.

The Women and Wool Farmstrong Fundraiser is the brainchild of shearing contractor Colin Watson-Paul who worked alongside rural insurance manager Harriet Partridge and other women in the community to organise it.  . .

Open for Business in a Small-Town: 5 things everyone can do to support small-town business – Uptown Girl:

I grew up with a family in the restaurant business and as a kid, loved everything about hanging out in our local, downtown business. So, when my husband climbed on board with the idea of running a small agritourism business on our farm, I jumped in. During that time, it’s become clear a few things people can do to support small-town businesses.

1. Shout the good out and whisper the bad in. This is the complete opposite of how we normally behave, and I am just as guilty as anyone. Think about the last time you had a bad meal in a restaurant. The server comes by and says, “How is everything?” Most people respond, “Fine.” Then, when they walk out, they literally tell everyone how awful the meal was… everyone except the one person who needs to know in order to change it – the business owner!

On the flip, when someone has a good experience, they will often rave to the business owner and then forget about it shortly after leaving. According to Andrew Thomas on Inc.com, a dissatisfied customer will tell 9 to 15 people. Only one out of every 10 satisfied customers will share about their experience. . .

Freethink’s Future of Food shows how efficient farming in the Netherlands is producing 20 times more food with 1/4 the water and the most sustainable agriculture systems in the world.

Not so much the loss

It wasn’t so much the loss, as the way the All Blacks lost that made last night’s Rugby World Cup semi-final such a disappointment.

Last week the team was on fire against Ireland, last night they looked like they’d lost their spark.

My heart has been backing Wales to win this evening but I’d rather face them than South Africa in the Plate match for third so might have to go with my head.

In other news North Otago won the Meads Cup, and this afternoon the Silver Ferns will be doing their best to beat the Diamonds in the deciding match for the Constellation Cup. 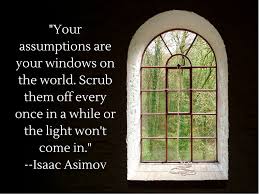 Your assumptions are your windows on the world. Scrub them off every once in a while or the light won’t come in – Isaac Asimov