Douzeper – illustrious , highly regarded person; noble, knight, or grandee; one of the “twelve peers” of Charlemagne, later associated with the twelve greatest peers of France

Pooh sat down and took the top off his jar of honey. “Lucky I brought this with me,” he thought. “Many a bear going out on a warm day like this would never have thought of bringing a little something with him.” And he began to eat. ~A.A.Milne #FridayFeeling #HEATWAVE2019 pic.twitter.com/wUVfq2zfzF

“If you don’t comply you won’t be able to supply.”

Ngatea dairy farmer Ken Jones has seen the future – and at 88 years of age a lot of the past.

He knows farmers will soon be confronted with an assortment of environmental rules they will have to abide by – in fact they already are – and he wants to get ahead of the game.

“I don’t know how far off that is but it’s no good hitting your head against a brick wall. I just want to make the farm compliant so I can hand it on to the family.” . .

Tina Mackintosh admits there were some late nights loading data after she and husband Duncan opted to embrace technology more than a decade ago.

The Mackintoshs, who farm at White Rock Mains, north of Rangiora, shared their journey of using technology to improve their farm system at last month’s Beef + Lamb New Zealand FarmSmart conference in Christchurch.

”We have a curious mind about data and what it can do, and we also believe it’s about sharing the good things when they work and, equally, not being afraid of sharing when the shite happens,” Mrs Mackintosh said.

”As we were going along the journey we had two babies, so we were entering data late at night. There was a lot of data to enter so it was quite frustrating. . .

A farm dog that sold for more than $10,000 in Gore yesterday marked the occasion by lifting his leg on his new owner’s gumboot.

Heading dog Glen sold for $10,200 at the annual sheep and cattle dog sale at the Charlton saleyards.

Glen was sold by his breeder, trainer and farmer David Parker, of Teviot Valley, and bought by sheep, beef and venison farmer Richard Tucker, of Becks. . . .

The Poison of Precaution: The Anti-Science Mindset -Riskmonger:

In last year’s excellent book, The Wizard and the Prophet, Charles Mann juxtaposed two polemics on the environment in the 1940s during the turning point of agricultural development: Norman Borlaug and William Vogt. Borlaug (the Wizard) took the scientific approach to innovate and develop new tools to solve problems facing agriculture. Vogt (the Prophet and arguably the founder of the modern environmental movement) would see an environmental problem as a reason for man to pull back and let the planet heal itself.

To this day, both approaches (to innovate or to pull back and take precaution) have defined environmental debates. There is no doubt which side I fall on. Borlaug’s scientific route has allowed humanity to thrive over the last 70 years. The Green Revolution in agriculture led to global economic expansions as abundance led to generations of risk-takers being able to leave the land and develop other opportunities for wealth generation. Environmentalists argue that the agri-technologies have led to deeper problems from saturated soil and poisoned water tables to serious human health issues to climate calamity. Social justice theorists are proposing agro-ecology as a Vogtian response in pulling back from seven decades of agricultural development. . .

The New Zealand Institute of Economic Development today released a landmark report, showing that New Zealand’s economy would lose up to $11.4 billion without crop protection products – and that crops would lose 30 percent of their value overall.

From drones and big data to financing apps, advanced technology can be a game changer.

More farmers across Africa are set to turn to digital solutions within the next three years, which will boost productivity and, potentially, employment across the value chain, according to a new study.

The study by the Technical Centre for Agricultural and Rural Co-operation (CTA) and advisory firm Dalberg Advisors, says that several barriers hindering the adoption of digital solutions in agriculture across the continent — notably, limited access to technology and connectivity — will be overcome. . .

Bottom line is you

Definition of bottom line: the fundamental and most important factor.

National’s message is simple: whether the you is singular or plural, what really matters is people. 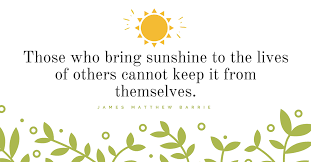 Those who bring sunshine to the lives of others cannot keep it form themselves.

2005 – The Provisional Irish Republican Army called an end to its thirty-year-long armed campaign in Northern Ireland.

2008  – The historic Grand Pier in Weston-super-Mare burned down for the second time in 80 years.

2010 – Airblue Flight 202 crashed into the Margalla Hills north of Islamabad, Pakistan, killing all 152 people aboard. It was the deadliest aviation accident in Pakistan history and the first involving an Airbus A321.

2017 – Prime Minister of Pakistan, Nawaz Sharif was disqualified for lifetime by Supreme Court of Pakistan finding him guilty of corruption charges.