Marxists get up early in the morning to further their cause. We must get up even earlier to defend our freedom. pic.twitter.com/tkkguZvJOY

Federated Farmers believes the Government has set a substantial challenge in its announcement of a review into the Resource Management Act.

The organisation agrees with Environment Minister David Parker that because of frequent amendments, the RMA is now overly cumbersome, costly and complex.

“The review will be no easy task. It will need to consider wide and diverse opinions and concerns. There are few organisations which have been more intricately and routinely involved in resource management processes across the country since the Act first came into force than Federated Farmers, so we consider our active input on the review panel will be vital,” Federated Farmers resource management spokesperson Chris Allen says. . .

Along with the entire country, Otago has been affected – facing immense challenges in dealing with this disease, and the ongoing effort to eradicate it. . .

We’re not just meeting the regulations, that’s mandatory for us. Rather we’re going over and above, to achieve excellence in animal welfare, sustainable land management, looking after employees and premium quality milk.”  . .

A pair of fantails flit above Robert Barry’s head as he bends down to inspect a predator trap at the base of a totara tree.

The towering native is in a pristine bush block on a farm owned by the BEL Group near Waipukurau in central Hawke’s Bay.

The eight-hectare block is protected by a Queen Elizabeth II Trust covenant and is dotted with almost a dozen traps. . .

A tenure review agreement has been reached for the North Canterbury high country station, Island Hills.

Under the soon-to-be scrapped tenure review process, leased high-country Crown land can be signed over to farmers, provided they set aside areas for conservation.

Land Information New Zealand said 1600 hectares would be transferred to the Crown as conservation estate and 3200 will be freehold subject to conservation covenants, that restricts activities such as grazing and vegetation clearance.

The remaining 200 hectares would be freehold without restrictions. . .

Could our riparian systems become overloaded and therefore useless? Riparian strips are correctly promoted as useful tools for reducing environmental pollution, especially for their ability to filter out faecal bacteria and sediment before these enter streams. But there is much more to it, writes Bert Quin.

Many frequently made claims for the ability of riparian strips to improve water quality are based on very short-term studies only. This is particularly true of phosphorus (P) and nitrogen (N) removal.

Unfortunately, we are now in the days of emphasis on short-term, quick-results trials that lend themselves to publication in many different journals to ensure more cash from equally short-sighted funding organisations and companies with vested interests. . .

Mr Jackson said he sympathised with those on the frontline, but the government had to respect the settlement. . .

Mr Jackson said he understood that some felt ripped off, but warned that siding with anyone other than those with the mandate was a dangerous path.

“The day we walk away from mana whenua is the day we might find ourselves in real trouble. Right now we’re committed to supporting to what they’ve signed up for – as hard as that might be,” he said. . .

Mr Jackson said there were people on the frontline who felt a strong sense of injustice but when those who have rights over land make a decision – like the deal done with Fletcher – the government had to support that.

“We understand the hurt but sometimes people, particularly our mana whenua, have got the right to make these decisions and we’re not going to say you’re wrong and get out of there. I know others are doing that but we wouldn’t be so bold or so arrogant,” he said. . .

Just a few hours later the Prime Minister was, by that definition being bold and arrogant:

Prime Minister Jacinda Ardern has vowed that no building will take place at Ihumātao while the government and other parties try to broker a solution. . .

“We have heard, here, the strong voice of young people,” Ms Ardern said.

“At the same time we hear the perspective of mana whenua.

She said the government had to address that there had been an escalation and that’s why the call was made to hold off on building work.

“That activity cannot take place while there is such a large gathering there. . .

Not only is this putting the angst of protesters ahead of what mana whenua have agreed with Fletchers,  it’s a u-turn on her previous position:

Earlier this week, Ms Ardern said the government would not intervene in the issue.

“Ultimately we are falling on the side of the local iwi [who support the housing development] and their position. They are not the ones leading the protest here and so if we come in over the top, it really would be undermining the local iwi in this case,” she said on Wednesday.

By last night the show of force by protesters appears to have persuaded her to not only undermine the local iwi, but to trample all over Fletcher’s property rights.

It is also poking its nose into what is essentially a family dispute.

This was a point made by former Labour MP and  former Minister of Māori Affairs  Dover Samuels who called Magic Afternoons with Sean Plunket with a stark message to politicians and media regarding Ihumātao: Stay out.

He told Sean that this is an internal matter for the family to figure out for themselves. Interference form the media and politicians has fanned the flames of this dispute, he says, “I just can’t see the involvement of any politician as being helpful.”

(Click the link above if you want to listen to the full interview).

RNZ explains the history and why Ihumātao is being occupied by protestors.

It is complex but:

“This piece of land within the development area will be the first time since the land confiscations of 1863 that land will be returned to mana whenua. The agreement to have this land returned to mana whenua was negotiated between Fletchers, Makaurau Marae Māori Trust and Te Kawerau Iwi Tribal Authority. Auckland City Council was consulted during this process.”

Fletcher’s have committed to returning 25 percent (eight hectares) of the land they own to the Kiingitanga.

This isn’t a Māori versus Fletcher issue – on both sides are members of the same iwi, hapū and whānau. . .

If the issue is complex, the underlying principle is not.  Everyone, not least the government, should be respecting property rights.

This point was made by Act leader David Seymour:

. . Jacinda Ardern has legitimised unlawful behaviour by capitulating to an illegal occupation as her opening move.”

“The PM has cultivated a brand of a kinder, more inclusive politics, but some things such as occupying private property are always wrong. She has just sent the message: ‘if you occupy private property, the Government will take your side instead of protecting property rights.'”

“It appears that the Prime Minister has prevented the legal owners of land from carrying out a consented development, and offered the protesters a seat at the table.  . .

Maori property rights were ignored when the land was originally taken. Redress for that was made under a Treaty settlement.

Fletcher Building has gone beyond what is legally required in returning  25 percent of its land to the iwi. It will be building nearly 400 much-needed houses on the rest, some of which will be sold to members of the iwi.

That some think this is not good enough is no justification for the government to interfere and, in doing so, undermine Fletcher’s property rights.

Private property has, for very good reasons, been exempt from Treaty of Waitangi settlements.

Government giving way to protestors like this sets a very, very dangerous precedent that is in danger of precipitating a property rights crisis. 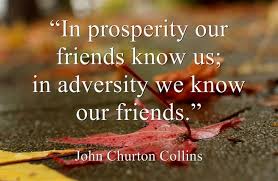 In prosperity our friends know us; in adversity we know our friends. – John Churton Collins.

1054  Siward, Earl of Northumbria invaded Scotland to support Malcolm Canmore against Macbeth of Scotland, who usurped the Scottish throne from Malcolm’s father, King Duncan. Macbeth was defeated at Dunsinane.

1302  Battle of Bapheus: Decisive Ottoman victory over the Byzantines, opened up Bithynia for Turkish conquest.

1663 The English Parliament passed the second Navigation Act requiring that all goods bound for the American colonies had to be sent in English ships from English ports.

1694  A Royal Charter was granted to the Bank of England.

1720  The second important victory of the Russian Navy – the Battle of Grengam.

1794  Maximilien Robespierre was arrested after encouraging the execution of more than 17,000 “enemies of the Revolution”.

1866  The Atlantic Cable was  completed, allowing transatlantic telegraph communication for the first time.

1919  The Chicago Race Riot erupted after a racial incident on a South Side beach, leading to 38 fatalities and 537 injuries over a five-day period.

1917 The Allies reached the Yser Canal at the Battle of Passchendaele.

1921  Researchers at the University of Toronto led by biochemist Frederick Banting announced the discovery of the hormone insulin.

1928  Tich Freeman became the only bowler ever to take 200 first-class wickets before the end of July.

1940 The animated short A Wild Hare was released, introducing the character of Bugs Bunny.

1974  Watergate Scandal: The House of Representatives Judiciary Committee voted 27 to 11 to recommend the first article of impeachment (for obstruction of justice) against President Richard Nixon.

1983  Black July: 18 Tamil political prisoners at the Welikada high security prison in Colombo were massacred by the Sinhalese prisoners, the second such massacre in two days.

1990  The Supreme Soviet of the Belarusian Soviet Republic declared independence of Belarus from the Soviet Union.

1990 – The Jamaat al Muslimeen staged a coup d’état attempt in Trinidad and Tobago, occupying Parliament and the studios of Trinidad and Tobago Television, holding Prime Minister A. N. R. Robinson, most of his Cabinet, and the staff at the television station hostage for 6 days.

1995  The Korean War Veterans Memorial was dedicated in Washington, D.C..

2002  Ukraine airshow disaster: A Sukhoi Su-27 fighter crashed during an air show at Lviv, killing 85 and injuring more than 100 others, the largest air show disaster in history.

2006  The Federal Republic of Germany was deemed guilty in the loss of Bashkirian 2937 and DHL Flight 611, because it was illegal to outsource flight surveillance.

2007  Phoenix News Helicopter Collision: News helicopters from television stations KNXV and KTVK collided over Steele Indian School Park in central Phoenix while covering a police chase; there were no survivors.

2012 – The opening ceremony of the 2012 Summer Olympics take place at the Olympic Stadium in London.

2014  – Centennial anniversary celebration of Iglesia ni Cristo in Philippine Arena, the largest arena in the world at Ciudad de Victoria complex which was built by the church itself.

2015 – At least seven people were killed and many injured after gunmen attacked an Indian police station in Punjab.