The primary sector will work in good faith with government and iwi/Maori to design a practical and cost-effective system for reducing emissions at farm level by 2025. The sector will work with government to design a pricing mechanism where any price is part of a broader framework to support on-farm practice change, set at the margin and only to the extent necessary to incentivise the uptake of economically viable opportunities that contribute to lower global emissions. The primary sector’s proposed 5-year programme of action is aimed at ensuring farmers and growers are equipped with the knowledge and tools they need to deliver emissions reductions while maintaining profitability. . . 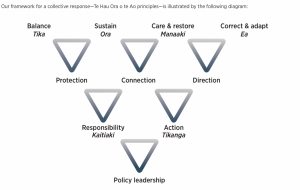 Farmers could be about to receive some intensive education on managing greenhouse gas emissions from their farms and orchards.

A proposed five-year programme of action beginning next year has been developed by 11 primary sector groups as diverse as Apiculture NZ, Horticulture NZ, the Federation of Maori Authorities, Federated Farmers and bodies representing the livestock industry.

This means that reducing emissions won’t be at the cost of lower production.

That is important not just for producers’ incomes but New Zealand exports and the income they generate, and global emissions which would increase if less food produced here led to more produced less efficiently in other countries.

It also counters the Interim Climate Change Committee recommendation to introduce a tax on livestock emissions to be collected by processors up to 2025 when the tax will be based on individual farm assessments.

A joint statement by the group says a central tenet of the Government’s discussion document is pricing agricultural emissions.

“The primary sector is seeking to work with Government to design a pricing mechanism where any price is part of a broader framework to support on-farm change, contributes to lower global emissions and supports farmers and growers to make practical changes on the ground.

“This will be critically important to enable a smooth transition for the agricultural sector.”

The body’s plan will establish graduated, targeted milestones for goals such as farm environment plans and farm-level measurement of greenhouse gases.

A lot of farms already have farm environment plans.

North Otago Irrigation Company (NOIC) pioneered requiring independently audited FEPs as a condition of supply. Other companies have followed this example and many farmers have chosen to have FEPs as a commitment to best practice.

However, many of those plans won’t yet be measuring greenhouse gases.

For example, by 2022 the aim is for every farmer to know the level of emissions generated from their farms and by 2025 to have an accounting and reporting system for those emissions.

By the same year all farms will have a farm environment plan and 70% of all farmers will be managing their greenhouse gas emissions in accordance with their plan.

The commitment said substantial work has been done to develop methodology and tools to calculate farm-level emissions and extension programmes to educate farmers as well as continued research into methane inhibitors, vaccines and animal genetics. . .

Continued research is essential to provide the tools farmers will need to reduce emissions without reducing production.

. . . The group wants sequestration to be credited to each farm and farmers should not be required to enter the Emission Trading Scheme to get financial credit for that sequestration.

The document says the primary sector invests $25 million a year to reduce greenhouse gas emissions and to adapt to climate change.

It notes the greenhouse gas footprint for New Zealand dairy production is 30% below Europe’s and less than half the world average while for lamb it is 25% that of the rest of the world.

This point is lost on those, including politicians, who erroneously think reducing livestock numbers here will reduce global emissions.

Just like the oil and gas ban, it would have the perverse outcome of increasing emissions as our less efficient competitors increased production to compensate for less food produced here.

“Both the primary sector and ICCC agree that a farm-based pricing mechanism is the best way to get action on biological greenhouse gas emissions. Where we differ is that we think we can make faster progress by working with farmers from the get-go to help reduce on-farm emissions and prepare for farm-based pricing from 2025, rather than having an interim processor levy.”

Mr Morrison says that the ability of the primary sector to fund work on developing a farm-based pricing system through existing resources will provide a win-win situation for farmers and the climate.

“A new and blanket levy at the processor level wouldn’t incentivise any on-farm changes and would be seen as farmers as a new tax, which would undermine farmer’s efforts to make positive changes, especially as individual farmers wouldn’t reap the benefits of any improvements they may make.” . .

Imposing a tax rather than finding the tools to enable farmers to reduce emissions would add costs without necessarily changing behaviour.

DairyNZ chief executive Dr Tim Mackle says the Commitment doesn’t just identify a problem – it provides a clear pathway forward and a way for the primary sector to work with the government rather than just impose regulation.

. . .We and the ICCC both agree that a farm-based mechanism is the best way to address biological emissions, however, our views diverge when it comes to how we get there.

“Bringing agriculture into the ETS at the processor level amounts to little more than a broad-based tax on farmers before we have the knowledge, support and tools to drive the practice change that will reduce emissions.

“The stakes are high. New Zealand’s primary sector contributes one fifth of our GDP, generates 1 in 10 jobs and produce 75% of our merchandise exports.  We want to avoid shocks like the 80s and make any changes in a stable and considered way.

Anything which imposes costs and reduces production would re-create the ag-sag of the 1980s with all the economic and social pain with little or not economic gain.

“As an alternative we have put forward a proposed five-year work programme to build an enduring farm-level emission reduction framework and work with farmers and the wider rural sector to provide real options to reduce their footprint.

“While appropriate pricing mechanisms for incentivising emissions reductions at farm level can have an important role to play in incentivising change, creating an environment that enables and supports farmers and growers to make changes on-the-ground is equally important to prepare for farm-based pricing from 2025. . .

Education and research to provide tools to enable change will have a positive and lasting impact that taxes won’t.

This entry was posted on Wednesday, July 17th, 2019 at 9:00 am and is filed under business, environment, Farming, food, politics, rural. You can follow any responses to this entry through the RSS 2.0 feed. You can leave a response, or trackback from your own site.