Statistics NZ has finally come out with the number of partial responses to the census:

Stats NZ’s confirmation that the problems with Census 2018 is not just with the record low response rate, but a doubling in the partial response rate compounds the problems for the State Sector, says National’s State Services Spokesperson Nick Smith.

“We now know over 700,000 people or one in seven New Zealanders did not complete Census 2018. This leaves a huge data hole that will create problems for years in allocating tens of billions of dollars in funding for central state services like health and education, as well as affecting electorate numbers and boundaries for Election 2020.

“Stats NZ needs to accept responsibility for the 2018 Census shambles. It cannot blame the funding when it was 36 per cent greater than Census 2013 and when this budget was underspent. It cannot blame the digital strategy when Australia successfully delivered its 2016 Census with a 95 per cent response rate using a similar strategy.

“Stats NZ botched the delivery of Census 2018 by excessively relying on online responses and providing insufficient neighbourhood backup for others. It compounded the problem by dismissing concerns expressed by Census field offices, commentators and the National opposition when the Census could have been retrieved. . .

The census shambles hasn’t stopped the department coming out with more things to measure:

Indicators Aotearoa New Zealand is being developed by Stats NZ as a source of measures for New Zealand’s wellbeing. The set of indicators will go beyond economic measures, such as gross domestic product (GDP), to include wellbeing and sustainable development.

The wellbeing indicators will build on international best practice, and will be tailored to New Zealand.  . .

The indicators cover New Zealand’s current wellbeing, future wellbeing (what we are leaving behind for future generations), and the impact New Zealand is having on the rest of the world. Under these dimensions are a list of topics and indicators developed to measure wellbeing.

You’ll find a link to the suite  of indicators if you click on the link above.  Among them are abstract things like spiritual health,  sense of belonging, ability to be yourself, locus of control and sense of purpose.

If Stats NZ hasn’t managed to properly count concrete things through the census, how on earth is it going to measure these abstract things?

Even if it can, when did spiritual health, a sense of belonging, the ability to be yourself, locus of control (whatever that is) and sense of purpose become the government’s business?

Stats NZ isn’t the only state entity getting touchy-feely.

There’s a $35 registration fee for this event at Treasury. . .

I have no clue whether the money goes to the folks running the session or what; I suspect it covers a cost of the deck of cards provided. But they recommend that attendees buy a deck of their cards in advance as practice as well, so attendees would wind up with double the compassion. It’s wonderful how Treasury is helping to promote a small business by hosting it and encouraging folks to buy its products.

Minister Jones would approve, if Heartwork were based in the Provinces.

Here’s the pitch. Treasury is Love.

Imagine surprising Aotearoa with a strain of compassion so delightful that it re-wires our collective consciousness!

COME TO THIS SOCIAL LAB TO CONNECT AND CREATE TOGETHER.

We’ve created a “compassion starter culture” – a network of people who want to create a more compassionate culture in Aotearoa, starting where we are – in our workplaces.
We’ve been playing and rapidly prototyping with the Heartwork Wellbeing Card Game* – now available publicly.
We know that the intention for what we want to create has a huge power.
We don’t have all the answers. And we can’t do this mahi alone.

So we’d like to invite you into this social lab.

So we can grow an even more beautiful, and more resilient strain together.
We’ll share what we’re learning while we’re still metabolising. . .

Just imagine how better Treasury would have been prepared for the currency crisis after Muldoon lost election if they had thought to consult both their sun feelings and their moon feelings. I don’t know how New Zealand came through it without that. But we will be far better prepared for the next crisis. Treasury may have few remaining economists, but every single person who remains there will care deeply.

And surely that matters more than anything else.

You can watch a video of the card game here.

Taxpayers’ Union spokesman Louis Houlbrooke says, “The purpose of Treasury is to provide the Government with economic analysis and monitor the success of the wider civil service. It seems this has been abandoned in favour of feel-good card games.”

“It’s no wonder we need a taxpayers’ union when the agency responsible for monitoring public spending is busy trying to ‘surprise Aotearoa with a strain of compassion so delightful that it re-wires our collective consciousness!’”

“Treasury was once a proud institution, a key cog in the vital economic reforms of the 1980s and 1990s. It’s a bleak vision of the future when you see adult civil servants consulting with their ‘sun’ and ‘moon’ feelings.” . .

Do the government, and it’s agencies, know about Maslow’s Hierarchy of Needs?

Maslow’s hierarchy of needs is a motivational theory in psychology comprising a five-tier model of human needs, often depicted as hierarchical levels within a pyramid.

Needs lower down in the hierarchy must be satisfied before individuals can attend to needs higher up. From the bottom of the hierarchy upwards, the needs are: physiological, safety, love and belonging, esteem and self-actualization. . . 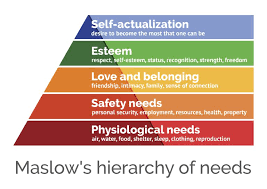 The government has a role in ensuring some of its citizens’ basic physiological and safety needs are met.

The abstract concepts in the indicators come under psychological and self-fulfilment needs. Most of these aren’t the business of government and those which are won’t be met unless the government and its agencies get the basics – health, education, welfare, housing, infrastructure . . .  right.

This entry was posted on Thursday, April 11th, 2019 at 9:00 am and is filed under politics. You can follow any responses to this entry through the RSS 2.0 feed. You can leave a response, or trackback from your own site.