Potation  – an alcoholic drink, draft or brew; the action or an instance  of drinking alcohol or inhaling; a drinking bout.

There was also someone a wee bit older – Tom Marshall who is in his 80s and still shearing his own sheep.

Tom Marshall, with his Poll Dorset entries, at North Otago A & P Show today. In his 80s and still shearing his own sheep #legend pic.twitter.com/uqbgpr33dx

"People don’t usually grow up when there are other people who make excuses for their immaturity."

The rural sector has given an unequivocal thumbs down to the Tax Working Group’s recommendation to bring in an comprehensive capital gains tax.

The group has recommended the Government implement a capital gains tax – and use the money gained to lower the personal tax rate and to target polluters.

The Fonterra Shareholders’ Council has called for an end to open entry to the co-operative and a clear path to dairy industry deregulation.

In its submission to the Ministry of Primary Industries review of the Dairy Industry Restructuring Act the council also called for an end to access to regulated milk by other export processors.

Goodman Fielder should be entitled to buy Fonterra milk for domestic purposes only, the submissions said.

Council chairman Duncan Coull also called for all other dairy companies to be required to publish their milk prices in a standardised form. . .

While farmers and industry leaders welcomed news that the Federated Farmers Meat and Wool Council voted last week to support a compulsory wool levy on wool producers, there was a clear preference for any such levy to be applied on the context of a robust business plan.

”We’ve had lots of different levies over the years for the industry and at the end of the day farmers saw very little return,” Waikoikoi farmer Blair Robertson said.

”Going forward we have to make sure the money gets to where it needs to be – marketing and promoting wool products to end customers.”

He said in the past bureaucracies had grown around the sector which chewed through millions of dollars while providing very little in return. . .

The secret life of milk…. pic.twitter.com/e2mQ2pXqre

Sexist responses to a backpacker’s job ad are a blow to New Zealand’s image and to an industry already struggling to find good workers, farmers warn.

Finnish traveller Mari Vahanen advertised on a farming Facebook page, saying she was a hardworking farmhand or machine operator.

The post received 1600 responses, but most of them focused on Vahanen’s appearance rather than her employment prospects.

Tararua dairy farmer Micha Johansen said the comments were a bad look for New Zealand’s agricultural sector and the country in general.  . .

With temperatures soaring above 30 degrees in Matamata-Piako, a thought can be spared for the district’s livestock.

“Animal welfare and animal husbandry is probably the number one thing, because that’s what is earning you your income, so protecting and looking after them, but also looking after staff as well,” he said. . .

Geoff Smith attends as many A&P shows as he can during the season and there are 97 of them.

In his third year as the New Zealand Royal Agricultural Society’s (RAS) president, he spends time finding ways to ensure the shows remain relevant to their communities, as well as building relationships with other rural and civic organisations.

He is in Central Otago this week to go to the Mt Benger, Central Otago and Maniototo shows, as well as attending the society’s southern district executive meeting in Tapanui on Sunday. . .

Ruatoria-based Hikurangi Cannabis Company has been in Rome this week participating in an international standards setting meeting for the cannabis industry. The meeting included recommended changes to the way cannabis is defined in both legal and scientific terms.

ASTM International, a global industry standards body with 30,000 members worldwide representing more than 20 industry sectors held a workshop in Rome under its technical committee D37 on Cannabis. The group of 600 industry experts are working to develop standards for cannabis products testing and production processes across the globe.

The group aims to meet the needs of the legal cannabis industry by addressing quality and safety issues through the development of classifications, specifications, test methods, practices, and guides for cultivation, manufacturing, quality assurance, laboratory considerations, packaging, and security. . .

All borrowed from Proud to be a Farmer

smiles | Tagged: Proud to be a Farmer |

The Tax Working Group’s capital gains tax proposal is complicated with all the costs and opportunities for avoidance that go with complications.

Better taxes encourage what we need more of.

The TGW’s CTG proposal would tax savings and investment.

Better taxes discourage what we want less of.

The TGW’s CTG exempts the family home which would encourage even greater investment in housing.

The TGW’s CTG would tax businesses and exempt art, cars and yachts.

The TGW’s CTG is a bad tax. 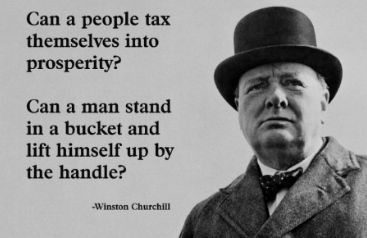 Can a people tax themselves into prosperity? Can a man stand in a bucket and lift himself up by the handle? – Winston Churchill

1455 Traditional date for the publication of the Gutenberg Bible, the first Western book printed from movable type?

1903 Cuba leased Guantánamo Bay to the United States “in perpetuity”.

1917 First demonstrations in Saint Petersburg. The beginning of theFebruary Revolution.

1954 The first mass inoculation of children against polio with the Salkvaccine began in Pittsburgh.

1983 The United States Environmental Protection Agency announced its intent to buy out and evacuate the dioxin-contaminated community ofTimes Beach, Missouri.

1992 –  The Socialist Labour Party was founded in Georgia.

2010 – Unknown criminals poured more than 2.5 million litres of diesel oil and other hydrocarbons into the river Lambro, in Northern Italy, causing an environmental disaster.

2014 – The closing ceremony of the Winter Olympics took place in Sochi, Russia.