We’d taken the precaution of booking a table for lunch with friends at Riverstone Kitchen.

Not many years ago this was a very stoney paddock. Now it’s home to a thriving business, set in beautiful and bountiful gardens, overlooked by newly built Riverstone Castle.

The first car park was full when we pulled in, the shops were bustling and the restaurant was busy.

But busyness didn’t detract from the service which was up to the usual high standard. The food was simple and delicious, and the company fun.

The Riverstone complex makes a valuable contribution to the economic and social fabric of the Waitaki District and I’m grateful for it.

Armistice – an agreement made by opposing sides in a war to stop fighting for a certain time; a temporary suspension of hostilities by agreement of the warring parties; temporary stopping of open acts of warfare by agreement between the opponents; a truce.

"I never cease to be amazed at how often people throw around the lofty phrase 'social justice' without the slightest effort to define it. It cannot be defined because it is an attitude masquerading as a principle. "

"What is more scary than any particular candidate or policy is the gullibility of the public and their willingness to be satisfied with talking points, rather than serious arguments."

Of course I want to save the world, she said, but I was hoping to do it from the comfort of my regular life. Regular Life © 2018 Brian Andreas – posted with permission.

It was hoped that it would be the war to end all wars.

Many died, many lives were changed irreparably, in that war and many others since.

But we still hope.

Sheepish by name not by nature – Andrew Stewart:

As a teenager Sophie Barnes decided she wanted to be a very good sheep farmer. Then she heard the best sheep farmers weren’t in her native Britain but on the other side of the world. Undaunted, she sold up, packed up and came to New Zealand. Andrew Stewart charts her journey.

Seventeen is a very young age to know exactly what you want to do with your life. But it was when Sophie Barnes discovered her love for sheep farming and realised it was going to be her lifelong passion.

The young girl from Nottingham was working on a British farm when she saw a ewe giving birth in an indoor barn at 3am.

Experiencing the birth and offering some help was an epiphany for Sophie and from that moment on there was only one thing she wanted to do – be the best sheep farmer possible. . .

Lack of rural health professionals will result in crisis – GPs :

Shortages of doctors and nurses in the regions are reaching crisis level, warn rural GPs.

The Rural General Practice Network is backing calls for rural health schools to embed a wide range of health professionals inside rural communities.

Its chief executive Dalton Kelly said such programmes had proved successful in Canada and Australia – but New Zealand had been slow to act.

“Already a quarter of rural practices have vacancies that we are struggling to fill and it is harder and harder to attract medical professionals into rural communities,” he said. . .

Fonterra has a rare opportunity to shed assets that aren’t performing, write down others to attract investment partners, and become a company more focused on value than volume, says First NZ Capital.

Head of institutional research Arie Dekker says the new senior management, by dropping capital expenditure intentions in the year ahead to $650 million from $1.005 billion, have already given an important signal that they will “address one of the key hygiene factors necessary to make it a more investable proposition.”

“Fonterra Shareholders Fund needs to show greater respect in its use of what we continue to highlight is scarce access to capital,” Dekker said in a note to clients. “Farmers and investors have lost considerable wealth from poorly thought-out and executed investment outside the core business in recent years.” . .

NZ Hops Ltd has at least quadrupled the value of its co-operative during the past 10 years.

Chief executive Doug Donelan says the Tasman-based 27-member producer co-op has grown from about $8 million to about $35m gross revenue.

But he says the co-op believes growth needs to be managed to ensure the significant increases in volumes that are coming on stream can be marketed. . .

The competition was held over the 7th and 8th November, where Annabel competed against five other finalists from other horticultural sectors – Landscaping NZ, Horticulture NZ, NZ Plant Producers, NZ Flower Growers and NZ Amenity Horticulture. . .

It takes approximately 1,400 pounds of corn to finish out a steer. Would we be better off feeding that corn to humans instead?

Associate Professor Tyron Wickersham and colleagues at Texas A&M University have done work to answer that very question. He shared this information during a media event coordinated by the National Cattlemen’s Beef Association.

He explained that there is a subset of people who favor the adoption of a plant-based diet, believing it is a better option for optimizing the food supply and human health, protecting the environment, and maintaining social justice. Yet, humans in general prefer and demand livestock protein sources when they have the money to buy them. . . 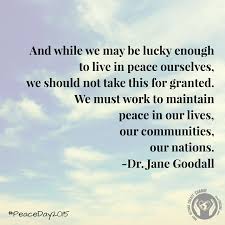 And while we may be lucky enough to live in peace ourselves, we should not take this for granted. We must work to maintain peace in our lives, out communities, our nations. – Dr Jane Goodall

1215 – The Fourth Lateran Council met, defining the doctrine of transubstantiation, the process by which bread and wine are, by that doctrine, said to transform into the body and blood of Christ.

1500 – Treaty of Granada – Louis XII of France and Ferdinand II of Aragonagree to divide the Kingdom of Naples between them.

1620 – The Mayflower Compact was signed in what is now Provincetown Harbor near Cape Cod.

1634 – Following pressure from Anglican bishop John Atherton, the Irish House of Commons passed An Act for the Punishment for the Vice of Buggery.

1673 – Second Battle of Khotyn in Ukraine: Polish-Lithuanian Commonwealth forces under the command of Jan Sobieski defeated the Ottoman army. In this battle, rockets made by Kazimierz Siemienowicz were successfully used.

1675 – Gottfried Leibniz demonstrated integral calculus for the first time to find the area under the graph of y = ƒ(x).

1805 – Napoleonic Wars: Battle of Dürenstein – 8000 French troops attempted to slow the retreat of a vastly superior Russian and Austrian force.

1839 – The Virginia Military Institute was founded in Lexington.

1854 – The Ballarat Reform League Charter adopted “At a Meeting held on Bakery Hill in the presence of about ten thousand men”.

1865 – Treaty of Sinchula was signed: Bhutan ceded areas east of the Teesta River to the British East India Company.

1869 – The Victorian Aboriginal Protection Act was enacted, giving the government control of indigenous people’s wages, their terms of employment, where they could live, and of their children, effectively leading to the Stolen Generations.

1887 – Construction of the Manchester Ship Canal began at Eastham.

1911 – Many cities in the Midwestern United States broke their record highs and lows on the same day as a strong cold front rolled through.

1918 – The signing of the Armistice between the Allies and Germany was celebrated in many cities and towns around New Zealand. Enthusiasm was dampened, though, by the ongoing impact of the influenza pandemic then ravaging the country. Germany signed an armistice agreement with the Allies in a railroad car outside Compiègne in France. The war officially ended at 11:00 (The eleventh hour of the eleventh day of the eleventh month).

1919 – The Centralia Massacre resulted in the deaths of four members of the American Legion and the lynching of a local leader of the Industrial Workers of the World.

1921 – The Tomb of the Unknowns was dedicated by US President Warren G. Harding at Arlington National Cemetery.

1930 – Patent number US1781541 was awarded to Albert Einstein andLeó Szilárd for their invention, the Einstein refrigerator.

1934 – The Shrine of Remembrance in Melbourne was opened.

1940 – Battle of Taranto – The Royal Navy launched the first aircraft carrier strike in history, on the Italian fleet at Taranto.

1942 Trans tasman liner Awatea was attacked by swarms of German and Italian bombers. Although its gunners shot down several planes, theAwatea was set on fire and holed by torpedoes. Remarkably, everyone on board got off safely (except for the ship’s cat, which was apparently killed by a bomb blast).

1944 – Dr. jur. Erich Göstl, a member of the Waffen SS, was awarded the Knight’s Cross of the Iron Cross, to recognise extreme battlefield bravery, after losing his face and eyes during the Battle of Normandy.

1960 – A military coup against President Ngo Dinh Diem of South Vietnam was crushed.

1968 – A second republic was declared in the Maldives.

1992 – The General Synod of the Church of England voted to allow women to become priests.

2000 – In Kaprun, Austria, 155 skiers and snowboarders died when a cable car caught fire in an alpine tunnel.

2001 – Journalists Pierre Billaud, Johanne Sutton and Volker Handloikwere killed in Afghanistan during an attack on the convoy they are traveling in.

2004 – New Zealand Tomb of the Unknown Warrior was dedicated at the National War Memorial, Wellington.

2012  – A strong earthquake with the magnitude 6.8 hits northern Burma, killing at least 26 people.

2014 – 58 people were killed in a bus crash in the Sukkur District in southern Pakistan’s Sindh province.