She believed in nothing. Only her scepticism kept her from being an atheist. – Jean Paul Sartre

Today I’m grateful to believe in not just one, but several somethings.

Psychologise –  analyse, investigate or regard in psychological terms, or on psychological motivation,  especially in an uninformed way;  theorise or speculate concerning the psychology of something or someone.

Fiona Gower is a fifth generation New Zealand farmer, her family migrated to New Zealand in 1840. She has worked on farms and in wool sheds around the country.

And as the president of RWNZ she comes from a long line of community advocates.

“My grandmother was one of the founding members of the Rural Women New Zealand group in the early days down in Marton.” . .

The next two months will be crucial for the 2018-19 season milk price as buyers work out New Zealand’s dairy production, Rabobank dairy analyst Emma Higgins says.

Fonterra will offer more whole milk powder on the Global Dairy Trade platform where prices have fallen for the past four months and seven out of eight auctions.

As the spring peak looms an NZ milk production to the end of August was 5% or eight million kilograms of milksolids ahead of the corresponding time last season. . .

Not big on sharing pic.twitter.com/wQ6Ng9NNSJ

A potato virus which affects potatoes used to make chips has been found for the first time in New Zealand.

The potato mop-top virus, known as PMTV, has been found in tubers from two properties in the Canterbury region.

David Yard of Biosecurity New Zealand, said PMTV was not a food safety issue but, if it became widespread, could cause productivity issues for growers. . .

From training dogs as a youngster to having success at a national dog trialling level, Steve Kerr knows a thing or two about getting the best from a working dog.

It was the first time the training day had been held there and Mr Carruthers said it was great to give people the opportunity not just to watch, but also get involved with their own dogs. . .

The rural wrap from around NZ:

The weekly rural wrap from around the country from RNZ’s Country Life.

Northland‘s kumara growers are finishing off bedding out to produce the plants that will go into the ground at the end of October. Kumara are fetching good prices – between $6 and $11 a kilo depending where you shop. Farms are still quite moist underfoot. However, showers this week will have served to freshen up the grass. Growers and farmers would like 15 millimetres of rain a week – and for the sun to come out. . .

The live sheep export industry has been dealt a further blow with Australia’s biggest customer, Kuwait Livestock Transport and Trading, moving to source a long-term supply of sheep from South Africa.

The company, also called Al Mawashi, issued an announcement to the Kuwait Stock Exchange saying its board had approved the establishment of a new live export subsidiary in South Africa, similar to its Australian subsidiary Rural Export Trading WA.

RETWA owns a large pre-export quarantine property near Peel, and has offices in West Perth. Establishing operations in South Africa would spell the end to Australia’s 40-year exclusivity arrangement of supplying sheep to KLTT, which was buying up to two-thirds of the 1.8 million Australian sheep exported each year. . .

I’m not sure if the world’s all that serious, she said, or if it just has a really dark way of having a good time. Dark Way – © 2016 Brian Andreas – posted with permission.

Truth hurts but could help

Fraser High School principal Virginia Crawford told the student body they were more likely to end up victims of domestic abuse, or even be raped, if they wagged school.

“Every student who walks out of the gate to truant is already a statistic of the worst kind, highly likely to go to prison, highly likely to commit domestic violence or be a victim of domestic violence, be illiterate, be a rape victim, be a suicide victim, be unemployed for the majority of their life, have a major health problem or problems, die at an early age, have an addiction – drugs, gambling, alcohol or smoking,” she said at a full-school assembly on Thursday.

A staff member told Newshub students are planning a “mass wag” for Monday in protest. . .

Truency is usually a symptom of some problems and the cause of others.

It might be a symptom of abuse, addiction, hunger, learning difficulties or a multitude of other problems.

It can also be the cause of crime, whether the truent is the perpetrator or victim and the other social and health problems the principal lists.

This truth hurts but if it leads to people taking truency as the serious problem it is, and acting on it, it could also help turn young people from a wrong and dangerous path. 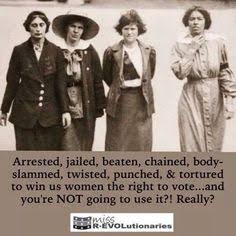 Arrested, jailed beaten, chained, body-slammed, twisted, punched & tortured to win us women the right to vote . .  and you’re NOT going to use it? Really?

1409  Battle of Kherlen, the second significant victory over Ming China by the Mongols since 1368.

1459 Battle of Blore Heath, the first major battle of the English Wars of the Roses.

1529  The Siege of Vienna began when Suleiman I attacked the city.

1641  The Merchant Royal, carrying a treasure worth over a billion USD, was lost at sea off Land’s End.

1779 American Revolution: a squadron commanded by John Paul Jones on board the USS Bonhomme Richard won the Battle of Flamborough Head, off the coast of England, against two British warships.

1803  Second Anglo-Maratha War: Battle of Assaye between the British East India Company and the Maratha Empire in India.

1857 The Russian warship Lefort capsised and sank during a storm in the Gulf of Finland, killing all 826 aboard.

1887 Ngati Tuwharetoa gifted the mountain tops of Tongariro, Ngauruhoe and Ruapehu to the Crown.

1905  Norway and Sweden signed the “Karlstad treaty”, peacefully dissolving the Union between the two countries.

1908  University of Alberta was founded.

1909  The Phantom of the Opera (original title: Le Fantôme de l’Opéra), a novel by French writer Gaston Leroux, was first published as a serialization in Le Gaulois.

1922 In Washington D. C., Charles Evans Hughes signed the Hughes-Peynado agreement, that ended the occupation of Dominican Republic by the United States.

1938 Mobilization of the Czechoslovak army in response to the Munich Crisis.

1952 Richard Nixon made his “Checkers speech“.

1962  The Lincoln Center for the Performing Arts in New York City opened with the completion of the first building, the Philharmonic Hall (now Avery Fisher Hall) home of the New York Philharmonic.

1999  NASA announced that it had lost contact with the Mars Climate Orbiter.

1999  Qantas Flight 1 overran the runway in Bangkok during a storm.

2002  The first public version of the web browser Mozilla Firefox(“Phoenix 0.1″) was released.