Fustrated – an improper use of the word frustrated; having such a high level of frustration means the user of the word simply forgets to include the R which indicates the level of fustration when they’re trying to describe their feelings to their peers;

An optimist: someone who thinks if two wrongs don’t make a right, it’s worth trying three.

One nice thing about egotists: They don’t talk about other people.

Egotist. A person of low taste, more interested in himself than me. – Ambrose Bierce.

Quantum mechanics: the dreams that stuff is made of.

The man who smiles when things go wrong has thought of someone to blame it on. – Robert Bloch.

Reality is for people who lack imagination.

People who urge you to be realistic generally want you to accept their definition of reality. 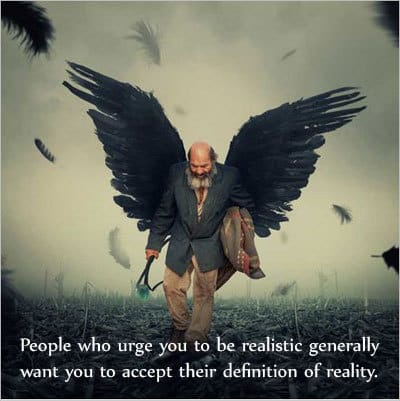 People say you can’t live without love, but I think oxygen is more important.

I’m not suffering from insanity, I’m enjoying every minute of it.

If Barbie is so popular, why do you have to buy her friends?

If love is blind, why is lingerie so popular? – Dorothy Parker.

I believe in luck: how else can you explain the success of those you dislike?  – Jean Cocteau.

How many roads must a man walk down before he admits he’s lost?

The word listen contains the same letters as the word silent.

It is easier to get older than it is to get wiser.

Depression is merely anger without enthusiasm.

The only problem with having nothing to do is you can`t stop and rest.  – Franklin Pierce Jones.

A proverb is a short sentence based on long experience.

What happens if you get scared half to death twice?

I’m not paranoid, but everyone thinks I am…

Our farmed meat is a green food – Neal Wallace:

Exporters are not shy in promoting New Zealand red meat as grass-fed and free-range but recent studies by Oxford and Otago Universities have lumped our system in with feedlots to claim the industry is environmentally degrading and unsustainable. Neal Wallace investigates the true environmental impact of grass-fed beef.

Work to differentiate the environmental footprint of New Zealand’s pasture-based red meat sector from feedlot systems that have a far greater impact has begun.

Aug. 10 (BusinessDesk) – Fonterra Shareholders’ Fund units, which gives outside investors exposure to Fonterra Cooperative Group, fell to a three-year low after the latest dividend downgrade added to scepticism about the efficacy of the cooperative’s structure.

The units dropped 2.7 percent to $4.97, adding to a 20 percent slide so far this year, and fell as low as $4.95, a level not seen since September 2015 when Fonterra was hit by a slump in global dairy prices and offered interest-free loans to its farmer shareholders to tide . .

Duncan Coull, Chairman of the Fonterra Shareholders’ Council, has expressed his absolute disappointment with today’s Board decision to reduce the 2017/18 forecast Farmgate Milk Price by five cents to $6.70 per kg/MS in order to support the balance sheet, and the decision to retain more of the Co-op’s earnings which will likely see no further dividend payment to Shareholders over the 10 cents distributed earlier in the year.

Mr Coull: “I can understand the Board’s rationale and that it is prudent to protect the balance sheet, but the fact that we find ourselves in this situation is unacceptable. . .

(BusinessDesk) – S&P Global Ratings said there is no immediate impact on its rating on Fonterra Cooperative Group from the group’s lower farmgate milk price and dividend guidance for the year ended July 31, issued this morning.

However, the Fonterra Shareholders’ Council expressed deep disappointment, saying “the fact that we find ourselves in this situation is unacceptable” and took the unusual step of questioning the cooperative’s value creation record at a time when a new chief executive is being sought and the chairmanship has unexpectedly changed. . .

Southland farmers are leading the way in environmental practices and 17 catchment groups are now established in the region. With six more in the wings, and half the region covered, reporter Nicole Sharp looks into some of the achievements to date.

When a group of farmers put their minds to it, anything is possible.

That is how the catchment group idea started in 2013, when some farmers in the Balfour area formed a group. . .

The first cow of each row reads the map to see which field they are grazing today then the rest of the row follow her out to the field #Farm24 pic.twitter.com/u76UJoLXv5

A woman is at the helm of the NZ Young Farmers Board for the first time in 12 years.

The 27-year-old is a technical farm manager with Ngāi Tahu and helps oversee the management of eight dairy farms.

Total hectares sown in wheat and barley this season is predicted to decrease by around 8%, but growers are positive about future prospects, Federated Farmers Arable Chairperson Karen Williams says.

Results from the Arable Industry Marketing Initiative (AIMI) July 1 Cereal Survey are out and confirm average yields are down compared to last season. Milling and feed wheat yields were down 12%, malting barley down 9%, feed barley down 10%, milling oats down 17% and feed oats down 6%.

Today's new arrival, a beautiful fawn female born at lunchtime..
Already on its feet and feeding from mum. By this evening, she'll be running around with all the other cria. So lucky this year with 95% of our cria born being female💖 pic.twitter.com/O7U3zvWHG0

In less than a fortnight, more than 30 New Zealand agritech leaders will make history in Silicon Valley.

The company behind Kerrygold butter is facing legal action for advertising its products as being made from the milk of grass-fed cows.

A US customer has taken umbrage with the butter maker, hitting it with a class action lawsuit claiming that Kerrygold has “misled” consumers, leaving them “unable to exercise their right to choose grass-fed products”.

Kerrygold cow diet Kerrygold cows are fed grass, but not exclusively – they also eat various grains such as soy and corn at certain times of the year, according to Dyami Myers-Taylor, the customer in question. . .

Free speech is not to be regulated like diseased cattle and impure butter. The audience . . . that hissed yesterday may applaud today, even for the same performance.  – William O. Douglas.

2017 – At least 41 people were killed and another 179 injured after two passenger trains collided in Alexandria, Egypt..