I’m ready to be inspired, she said & I said that’s not quite how it works, so instead we sat in the garden, breathing & watching the bees until she smiled quietly & said, I forget it’s that simple.  Inspiration © 2014 Brian Andreas – posted with permission.

Southland VetSouth director Mark Bryan says to get rid of Mycoplasma bovis all affected animals must be destroyed as international vets say the disease can be “devastating”.

In Australia, farmers “lived with” the disease but New Zealand was quite different, with climate and population of cows being larger, Bryan said.

New Zealand was more similar to the United Kingdom. . .

It was the 1984 Labour government that put dairy farmer Neil Bateup​ through his toughest time.

The New Zealand dollar was floated, Bateup’s interest rate went up 26 per cent, and the 2017 New Zealand Order of Merit recipient faced some serious financial hardship.

“But we got through it,” he says, in that matter-of-fact manner familiar to most. . .

The Proud to be a Farmer NZ Farmers Fast Five: Where we ask a Farmer Five quick questions about Farming, and what Agriculture means to them. Today we talk to Puripak Avocados Limited Avocado Grower, Ballance Agri-Nutrients Environment Award Winner and Proud Farmer Sue Culham.

How long have you been farming?

Originally a city girl I moved to Glenbervie, Whangarei in 2001. My husband and I were grazing beef on our original 27 hectares whilst working in the family engineering business where I was the Finance Manager. I hadn’t had much to do with country life before this time but once you got me on the land it was hard to get me back into that office. Planting our original 4 hectares of Avocados in 2004, and after having our daughter in 2006 I stepped back from the engineering to focus on the development of the orchard. . .

Proud to be a Farmer:

The Wool Press: Where we shine the spotlight on a Wool Product or Producer to celebrate wool as an environmentally friendly, innovative, humane and versatile natural fibre of now and the future. Today we talk to Tim Brown, former captain of the All Whites and founder of the worlds most comfortable shoes, Allbirds : The hugely popular runners and loungers made from New Zealand Merino.
1. What made you choose NZ Merino as a textile when you created All Birds?
We wanted to create the world’s most comfortable shoe so it made sense that we would use the world’s finest fibre to achieve that goal. In NZ Merino and their ZQ certification, we found a partner that is the gold standard in the delivery of sustainable and ethically sourced merino and we haven’t looked back since. . .

This small amount of Sunburn means fruit this perfect inside is being left behind. Certain retailers selling fruit at $2.90/kg or more when market price is 60-70c/kg isn’t helping shift oversupply issue. Everyone in the Industry needs to work together to keep consumers buying. pic.twitter.com/D4m8H6AjNR

Celebrating a season of abundance and choice – John Rigolizzo Jnr:

Not many people around the world eat “local” at Christmas.

At least nobody does in New Jersey, where I live and farm—and where snow commonly covers the fields at this time of year.

We’re already at work preparing a big dinner for our Christmas celebration: We’ll serve hundreds of raviolis to a gathering of two or three dozen members of our extended family.

For the homemade pasta, we rely on flour, eggs, and salt. We add tomato sauce, meatballs, and sausage. Some years we may include veal, which is more expensive. We’re also stocking up on garlic, parsley, and breadcrumbs.

Almost none of these ingredients are produced in New Jersey in December. . .

A fitting statement for the current dry spell we are going through pic.twitter.com/gtAaE4YJIF

How a former vegetarian became a butcher and ethical meat advocate – Debbie Weingarten:

Butcher and author Meredith Leigh encourages consumers to consider the life, death, butchering, and preparation of the animals on their plates.

Before she was a butcher, Meredith Leigh was a vegetarian. She was fascinated by plants and loved vegetables—how they grew, the way they tasted right out of the field, how they changed color and texture as they cooked.

But during a trip to Vietnam in 2004—after Leigh had been a vegetarian for nine years and a vegan for two—a woman named Loi served her water buffalo. Aware that Loi had raised and slaughtered the animal herself, the act of eating it became an act of connecting, and Leigh began to consider the idea of ethical meat. . . 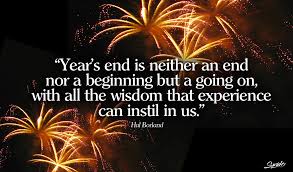 Year’s end is neither a beginning but a going on, with all the wisdom that experience can instil in us.

1857 Queen Victoria chose Ottawa, as the capital of Canada.

1996 – On New Year’s Eve around 4000 people made their way to the remote location of Canaan Downs, Tākaka, to take part in the first Gathering, a two-day festival for electronic dance music fans.

1998  The European Exchange Rate Mechanism froze the values of the legacy currencies in the Eurozone, and established the value of the eurocurrency.

2014  – A New Year’s Eve celebration stampede in Shanghai killed at least 36 people and injures 49 others.

2015 – A fire broke out at the Downtown Address Hotel in Downtown Dubai, United Arab Emirates located near the Burj Khalifa 2 hours before the fireworks display was due to commence. 16 injuries were reported.