A consistent policy on water for everyone is required, says BusinessNZ.

An ad hoc policy on water charging would be prone to political manipulation, with regions, councils and businesses all lobbying for favourable royalty regimes, BusinessNZ Chief Executive Kirk Hope said.

“Business needs an agreed, consistent water policy that applies to all water users and where rights to use water are tradable, fairly apportioned and can be known in advance.

“It would not be helpful for business to have to operate and make investment decisions in an environment where the cost of water is determined on an ad hoc, changing basis. . .

The water tax recently proposed by Labour would deliver a sharp blow to the economy of Auckland’s rural northwest, says National’s candidate for Helensville, Chris Penk.

“It’s unwanted because farmers, horticulturalists and viticulturists provide a significant number of jobs in the region … and slapping them with a water tax would completely undermine this growth. And the inevitable price rises for consumers would hardly be welcome either.”

“It’s unknown because Labour aren’t saying what they’d actually charge. There’s almost no detail associated with the threatened tax, even on such key aspects as how much it’d be and where the money would go.” . .

The recent outbreak of Mycoplasma bovis in South Canterbury has come as a shock to all dairy farmers. It is a disease that most New Zealand farmers had never heard of.

Regardless of whether or not the current outbreak can be contained, and the disease then eradicated, the ongoing risks from Mycoplasma bovis are going to have a big effect on the New Zealand dairy industry.

New Zealand dairy processors will struggle to fill existing and planned capacity in coming years as milk supply growth slows, leading to more cautious investment in capacity over the next five years, according to a new report from Rabobank.

The report Survive or Thrive – the Future of New Zealand Dairy 2017-2022 explains that capital expenditure in new processing assets stepped up between 2013 and 2015, but capacity construction has run ahead of recent milk supply growth and appears to factor in stronger milk supply growth than what Rabobank anticipates.

Rabobank dairy analyst Emma Higgins says milk supply has stumbled over the past couple of production seasons and, while the 2017/18 season is likely to bring a spike in milk production of two to three per cent, Rabobank expects the brakes to be applied and milk production growth to slow to or below two per cent for the following four years. . .

(BusinessDesk) – Synlait Milk, the NZX-listed milk processor, said regulatory approval for its ‘grass-fed’ infant formula in the US is taking longer than expected.

Rakaia-based Synlait is seeking approval from the US Food and Drug Administration for its ‘grass-fed’ infant formula to be sold in the world’s largest economy ahead of a launch of the product with US partner Munchkin Inc. The companies said in a statement today that the FDA process, which had been expected to be completed this year, is now expected to take a further four to 12 months. The stringent process, known as a New Infant Formula Notification (NIFN), includes a range of trials, audits and documentation. . .

Beef + Lamb New Zealand says that during the past year, New Zealand’s beef cattle herd increased by 2.8 per cent – to 3.6 million head – while the decline in the sheep flock slowed sharply as sheep numbers recovered in key regions after drought and other challenges.

Since the Scheme was launched in 2009, 227 graduates vets have helped address the ongoing shortages of vets working with production animals in rural areas of New Zealand.

“The 2014 People Powered report told us that by 2025, we need 33,300 more workers with qualifications providing support services, such as veterinary services, to the primary industries,” says Ms Upston. . . .

The opportunity to look at their farm system and strive to make production and profit gains was what spurred Alfredton farmers, James and Kate McKay, to become involved in the Red Meat Profit Partnership (RMPP).

Encouraged by their ANZCO livestock rep, Ed Wallace, James and Kate joined the programme in 2015 and have had the opportunity to look at some key aspects of their farming system. This has included sitting down with local BakerAg consultant, Richmond Beetham, who has helped the McKays look at their ultimate goal of mating a 50kg hogget. Increasing weaning weights and looking to diversify their forages has also been a goal for the McKays. . .

One of the most important events in the global cheese calendar, the International Cheese Awards attracted a record 5,685 entries in categories that ranged from traditional farmhouse to speciality Scandinavian. Cheeses from the smallest boutiques to the largest cheese brands in the world vied for top honours in the Awards, now in their 120th year of competition. . .

Dairy farmers spend over $1b on the environment:

Federated Farmers and DairyNZ have conducted a survey on New Zealand dairy farmers’ environmental investments, revealing an estimated spend of over $1billion over the past five years. 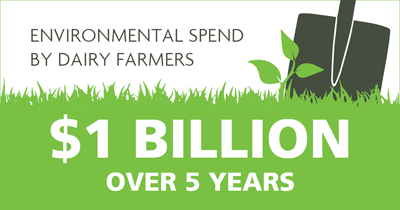 Five percent of the nation’s dairy farmers responded to the survey and reported on the environmental initiatives they had invested in such as effluent management, stock exclusion, riparian planting, upgrading systems and investing in technology, retiring land and developing wetlands.

“It is encouraging to see the significant investments farmers are putting into protecting and improving the environment,” says Andrew Hoggard, Federated Farmers Dairy Chair. . .

Criticism of farming gas emissions tells only half the story  – Paul Studholme:

It is imperative that political decisions on reacting to climate change are based on science, writes Waimate farmer Paul Studholme.

I write because of frustration with the sweeping generalisations and half-truths critical of the farming industry in this country that are presented by the mainstream media and environmental groups as facts.

One in particular, repeated frequently, is this: Farming produces more than half the greenhouse gases in New Zealand. This is only telling half the story or one side of the equation.

What is referred to here are the gases methane and carbon dioxide emitted by cattle and sheep. This is part of the carbon cycle. . .

This entry was posted on Wednesday, August 16th, 2017 at 12:00 pm and is filed under business, Farming, food, rural, trade. You can follow any responses to this entry through the RSS 2.0 feed. You can leave a response, or trackback from your own site.