It appears British PM Theresa May is going for a hard landing.  Cut the ties to the EU and go it alone, right from the word go.

What will this mean for UK fat lamb producers?  What opportunities will this provide for NZ and Australian frozen lamb exporters?

It seems to me UK farmers will undergo the same shocks that beset NZ farmers when Roger Douglas delivered the much needed coup de grace to the now notorious Supplementary Minimum Prices. . .

Silver Fern Farms’ dividend of 30 cents per share will be a one-off because it was only used to sweeten a deal with a Chinese company, according to one shareholder.

The company is New Zealand’s largest meat company and has confirmed today it will pay $35.5 million in dividends to its shareholders on 14 February.

The government approved the controversial $260 million deal with Chinese company Shanghai Maling last year after a group of shareholders fought for more than a year to keep the meat company in New Zealand ownership, arguing the original shareholder approval of the joint venture was unlawful. . .

Apples in short supply across the country – Laura Wlaters:

Apples are in short supply due to a slow start to the New Zealand season.

The popular fruit is usually available year-round but this week shoppers were shocked to see empty shelves where the granny smiths and royal gala would usually sit.

A Countdown spokeswoman said there were apples in their stores at the moment but they were not New Zealand apples.

A former Southland shearer made his way into the world record book again after breaking the three-stand strong-wool ewes shearing record for eight hours.

Eru Weeds, of Ohai but now based in Roxburgh, was joined by shearers James Mack, of Weber, and Luke Mullins, of Te Awamutu, at Waitara Station, inland northwest of Napier, to smash the record of 1347 by 264 sheep, finishing with a tally of 1611.  . .

He was answering Federated Farmers’ questioning of the priorities and fiscal discipline of New Zealand’s councils, as rates continue to outstrip cost indexes. Alexander says it is pleasing to see others parties like Federated Farmers and the tourism industry are picking up on the need for more flexible funding tools for rates.

Singapore Airlines has put on four special charter flights to get hundreds of tonnes of South Island cherries to Asia in time for Chinese New Year.

The first two 747 “cherry flights” each carrying up to 95 tonnes of fruit flew out of Christchurch on Thursday and Friday.

Another two are scheduled over the next week to get fruit to Singapore for distribution to South East and North Asian markets. . .

The GlobalDairyTrade price index increased by .6% in this morning’s auction.

That’s not a significant change but dry weather in several regions has led to a drop in production and lower supply should hold or boost prices in the next auction. Supply in Northland is down 7%. 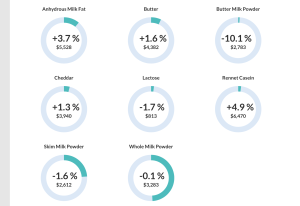 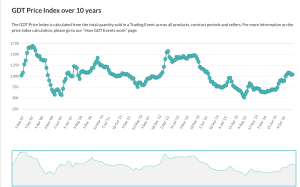 How liberal/conservative are you?

How liberal or conservative are you?

You are somewhat conservative when it comes to your beliefs and values. You tend to lean toward the right when it comes to social, military, and business issues, but you do agree with your more liberal friends in some areas and have room in your beliefs to listen to both sides of the argument.

Life is a great big canvas; throw all the paint you can at it. – Danny Kaye who was born on this day in 1913.

I believe deeply that children are more powerful than oil, more beautiful than rivers, more precious than any other natural resource a country can have.

1126 – Emperor Huizong abdicated the Chinese throne in favour of his son Emperor Qinzong.

1520 – King Christian II of Denmark and Norway defeated the Swedes at Lake Åsunden.

1871 – Wilhelm I of Germany was proclaimed the first German Emperor in the ‘Hall of Mirrors’ of the Palace of Versailles.

1886 –  Modern field hockey was born with the formation of The Hockey Association in England.

1911 Eugene B. Ely landed on the deck of the USS Pennsylvaniastationed in San Francisco harbor, the first time an aircraft landed on a ship.

1969  United Airlines Flight 266 crashed into Santa Monica Bay resulting in the loss of all 32 passengers and six crew members.

1974 A Disengagement of Forces agreement was signed between the Israeli and Egyptian governments, ending conflict on the Egyptian front of the Yom Kippur War.

1994 The Cando event, a possible bolide impact in Cando, Spain. Witnesses claimed to have seen a fireball in the sky lasting for almost one minute.

2003 A bushfire killed 4 people and destroyed more than 500 homes in Canberra.

2007 The strongest storm in the United Kingdom in 17 years killed 14 people, Germany’s worst storm since 1999 with 13 deaths. HurricaneKyrill, caused at least 44 deaths across 20 countries in Western Europe. Other losses included the Container Ship MSC Napoli destroyed by the storm off the coast of Devon.

2012 – A series of coordinated actions (including a blackout of Wikipedia) take place in protest against SOPA (Stop Online Piracy Act) and PIPA (Protect IP Act).).