This is what a guide or scout is supposed to be.

Few of the important people in my life were guides or scouts but they all have these virtues and I’m grateful for that.

Adiaphoron – a concept of Stoic philosophy that indicates things outside of moral law; actions that morality neither mandates nor forbids; something of a morally neutral nature; a thing which is neither inherently good nor bad; a tolerance of conduct or beliefs not specifically forbidden in the Scriptures; an issue or practice not considered to be central to a religion; a religious matter that allows latitude; a non-essential element of a faith.

Thousands of salmon have been killed during a burglary at a salmon farm on the West Coast.

Police are investigating the burglary at the South Westland Salmon Farm and Cafe in Paringa on Saturday.

Offenders entered the farm grounds that night and tampered with machinery on site.

The police said the intruders shut off the water supply to the salmon-rearing tanks, causing at least 13,000 fish to suffocate from a lack of oxygen. . .

As the world’s population grows, so too does urbanisation.  Towns turn into cities, houses into apartment blocks and the gap between urban and rural broadens.  However the divide left is not just physical.  It also creates a void of knowledge about what goes on in our rural communities.

Today’s urbanised generations are arguably more informed than ever. Thanks to technology, information is at our finger tips, and there are plenty of other opportunities to learn. Advertising is a multimillion dollar business for a reason. A few seconds air time is all it needs to cast a net on an audience, influencing their thoughts with the end goal of enticing them to buy a product, or view the world through a different lens. . .

Results Announced for the 2016 Fonterra Elections:

Returning Officer Warwick Lampp, of electionz.com Ltd, has declared the final results of the 2016 elections for the Fonterra Board of Directors, Directors’ Remuneration Committee, Fonterra Farmer Custodian Trustee and Shareholders’ Council.

Donna Smit lives and farms at Edgecumbe, and has built and owned seven dairy farms in Eastern Bay of Plenty and Oamaru. Donna is a Director of Ballance Agri Nutrients and Primary ITO, and a Trustee of Taratahi Agricultural Training Centre and Eastern Bay Energy Trust. Donna is a Chartered Accountant and was Company Administrator at Kiwifruit Co-operative EastPack for 24 years. . .

A giant lake and three-metre-high wall have been created on a family farm near Waiau, revealing the massive power of November’s earthquake.

Geotech scientists from around the world are scrambling to see the newly formed ‘Lake Rebekah’ and the ‘Waiau wall’ on the Kelly family’s farm.

The family is dwarfed by the sheer size of the rupture that’s torn straight through their property, forming a giant wall hidden in the hills of the farm. . .

“This is great news for a region that has suffered numerous droughts over the years,” says Mr Guy.

“Storing water means we can use it in dry spells, giving farmers and growers certainty and a real boost to the local economy.”

Northland Regional Council are also investing in the study which will focus on potential irrigation options in the mid North and Kaipara areas. . .

Rural insurance company FMG estimates that at least $40m of claims will be made from the 7.8 earthquake and aftershocks.

FMG’s Chief Operations Officer Conrad Wilkshire said the firm insured about half of the farms and rural businesses in the Kaikōura, North Canterbury and Marlborough districts.

Mr Wilkshire said so far they had received about 700 insurance claims from 500 businesses. . .

“Our philosophy is to develop long-standing partnerships with businesses, iwi and Department of Conservation to restore native bird life to our region. Cape Sanctuary began as a project by people passionate about bringing back and sustaining native species that once would have existed on the Cape Kidnappers peninsula and nearby coastal communities. . .

A long-term plan for the future management of New Zealand’s most valuable snapper fishery has been accepted by Primary Industries Minister Nathan Guy today.

“The Snapper 1 Management Plan is the result of more than two years hard work by the SNA1 Strategy Group, which is made up of members from the customary, recreational and commercial fishing sectors,” says Mr Guy.

“This fishery includes Bay of Plenty, the Hauraki Gulf and the eastern coast of Northland and is one of our most iconic inshore fisheries. It’s pleasing to have a range of perspectives sitting around the table and coming up with a long term plan for maximising the benefits for everyone.” . .

Leading Central Otago winery Wooing Tree Vineyard has today released plans that will enable the development of a boutique residential and commercial space designed to complement its wine business in Cromwell.

A zone change will need to be granted by the Central Otago District Council (CODC) to facilitate the development of the proposed Wooing Tree Estate, which is pegged for the vineyard’s 26-hectare site between SH6, SH8B and Shortcut Road. While Wooing Tree Vineyard will remain at the site, the new development could include various community amenities, tourist attractions, retail, accommodation and prime housing lots. . .

When I was National’s Southern regional chair I asked Prime Minister John Key to do a sketch for a fund-raiser.

He did and the auction began.

The bidding was good but I decided it could be better,  joined in and won.

I wonder what this is worth now?

The upward trend in dairy prices continues with a 3.5% lift in the GlobalDairy Trade price index in this morning’s auction. 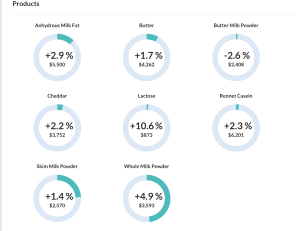 I hate it when people insist on wrangling with you about something, then try to stop as soon as they see the arguments are no longer going all their way. – Anne Fine who celebrates her 69th birthday today.

43 BC – Marcus Tullius Cicero was assassinated.

1724 – Tumult of Thorn – religious unrest is followed by the execution of nine Protestant citizens and the mayor of Thorn (Toruń) by Polish authorities.

1776 – Marquis de Lafayette attempted to enter the American military as a major general.

1930 W1XAV in Boston, Massachusetts broadcast video from the CBSradio orchestra program, The Fox Trappers. The broadcast included the first television commercial in the United States, an advertisement for I.J. Fox Furriers, who sponsored the radio show.

1941 Attack on Pearl Harbor – The Japanese Navy attacked the US Pacific Fleet and its defending Army Air Forces and Marine air forces at Pearl Harbor, Hawaii.

1946 – A fire at the Winecoff Hotel in Atlanta, Georgia killed 119 people, the deadliest hotel fire in U.S. history.

1963 – Instant Replay was used for the first time in an Army-Navy game by its inventor, director, Tony Verna.

1972  Apollo 17, the last Apollo moon mission, was launched. The crew took the photograph known as “The Blue Marble” as they left the Earth.

1983 – An Iberia Airlines Boeing 727 collided with an Aviaco DC-9 in dense fog while the two airliners are taxiing down the runway at Madrid Barajas International Airport, killing 93 people.

1984 – The ‘Thank God it’s over’ concert at Auckland’s Aotea Centre ended in a riot.

1987 – Pacific Southwest Airlines Flight 1771 crashed near Paso Robles, California, killing all 43 on board, after a disgruntled passenger shot his ex-boss travelling on the flight, then shot both pilots and himself.

2005 – Rigoberto Alpizar, a passenger on American Airlines Flight 924 who allegedly claimed to have a bomb, was shot and killed by a team of U.S. federal air marshals at Miami International Airport.

2007 – The Hebei Spirit oil spill began in South Korea after a crane barge that had broken free from a tug collided with the Very Large Crude Carrier,Hebei Spirit.