A friend said it would be a five-weeker and it was, but finally it’s gone and oh how very grateful I am for that.

Holophrastic  – expressing a complex set of ideas in a single word or in a fixed phrase; using or consisting of a single word that functions as a phrase or sentence.

Asian milk demand continues, but with little fat for exporters:

While demand from China and ASEAN countries for New Zealand milk continues to grow, export margins have been squeezed and could potentially tighten further, according to a recently-released industry report.

Getting children interested in agriculture is important if we want our future agriculture workforce to come from within New Zealand.

It’s also important if we want people to understand where their food comes from and why the country is so good at producing it.

A new online learning resource has been developed, tailored to suit the curriculum for Years 5-8. The Soil, Food and Society web-based resource covers how food is grown and takes the student from the nutrients in the soil to what appears in the lunch box, with experiments to back it all up. . .

Beef cattle have long been a passion for Natalie Howes.

Mrs Howes (29), nee Marshall, grew up on a farm at Taramoa in Southland where her family have the Benatrade Angus stud.

It was a natural progression for her to become involved in both showing and judging cattle.

She travelled to Australia several times, including as the recipient of the New Zealand Angus transtasman scholarship.

After completing her secondary schooling, Mrs Howes was intent on studying veterinary science but she wanted to add to her farming skills. . .

Merino farmers make the most of a lull in the Aussie market – Tim Cronshaw:

A shortfall of Aussie merino fleece gave Kiwi farmers something to smile about at a Melbourne sale.

The large offering of 2800 bales landed on an Australian market short on merino wool because of wet conditions.

The New Zealand offering sold for an average greasy price of $12.40 a kilogram, about 40c/kg up on the last sale two weeks ago of 2500 bales which also met a rising market. The average price included part tender wool, hogget wool and oddments. . .

From the ziplines and swing bridges built high in the canopy of Rotorua’s Mamaku Forest there’s a phenomenal view of what a New Zealand forest looks like when it’s not full of possums and rats. There’s an abundance of green palatable species now that the hordes of grazers are gone. Gary Coker, conservation manager for Canopy Tours and a qualified arborist, has been amazed at the speed of recovery since the eco-tour company began trapping in 2013. He reckons few New Zealanders realise what a healthy native forest actually looks – and sounds – like.

Mamaku Forest is noticeably louder now and last fruiting season the tawa seed was thick on the ground. It means there’s more food around for native birds and Gary says that wood pigeon numbers in the forest are incredible. There are tomtits, tui, bellbirds, whiteheads, fantails and kaka too and rare North Island robins will sometimes eat from your hand. . .

Every day is a new journey for Rick Sanford.

While travelling to farms and collecting milk remains a constant for the Fonterra tanker driver, the unknown journey is the part of the job he enjoys the most.

“You do the same job every day, but there is a variation in where you go.” . .

Behind every successful woman is herself – Pink Tractor.com

The GlobalDairyTrade price index increased 11.4% in this morning’s auction.

That reflects the fall in production, particularly in Taranaki and Waikato.

The price of whole milk increased 19.8%. 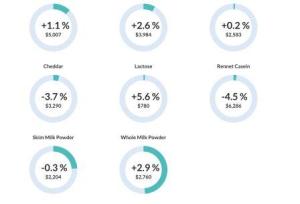 The average price was $3,327. That gives reassurance for the forecast payout which needs to,be at around $3,000.

No one understands my ills, nor the terror that fills my breast, who does not know the heart of a mother. – Marie Antoinette who was born on this day in 1755.

619 – A qaghan of the Western Turkic Khaganate was assassinated in a Chinese palace by Eastern Turkic rivals after the approval of Tang emperor Gaozu.

1947  Howard Hughes performed the maiden (and only) flight of theSpruce Goose; the largest fixed-wing aircraft ever built.

1984  Velma Barfield became the first woman executed in the United States since 1962.