Possums are pests but their fur is delightful and mixed with merino makes wonderful warm jumpers, hats and gloves.

It was -2 when I got home just after midnight today and no warmer when I went for my morning walk. But merino and possum hat and gloves warded off the cold from my head and hands and for that I’m very grateful.

For a lad from Kamo High in Northland – who didn’t come from the traditional farming background – it’s an overwhelmingly incredible achievement – and Athol was understandably emotional as he accepted the Cloak of Knowledge during the Grand Final Ceremony in Timaru tonight.

“I was shocked. I never expected it…but it’s all down to the team I work with. They are so supportive and encourage and inspire me.”

The humble 30-year-old was quick to respect the past and credited his rise through the dairy industry to his old agriculture teacher at Kamo High, who encouraged him to head to Lincoln University and study an agricultural commerce degree.

Athol’s win is significant in a year when the dairy industry has its fair share of challenges.

NZ Young Farmers CEO Terry Copeland said Athol represented the often un-acknowledged high achievers of the primary industry and said he was the embodiment of the wide array of skills those in the industry need to have to succeed.

“This contest showcases the extraordinary depth of talent that we have in the agricultural sector and continues to help progress and discover vital leadership for the sector. From Whangarei with no farming background to managing multi-million-dollar complex dairy businesses and now winning the FMG Young Farmer of the Year, Athol shows the exciting opportunities in our industry.”

FMG’s Chief Operations Officer Conrad Wilkshire said “Athol’s win is testament to what can be achieved if you’re prepared see yourself – and invest in yourself as a leader.

“Athol’s strong showing in this contest means the real opportunity actually lies in front of him now. He’s set himself a wonderful platform to become a great ambassador for the dairy industry.  I think his story, his raw ability and now tonight’s success is quite inspirational to be honest – a very deserving winner and a huge asset to the industry.  I think we should all be quite excited by what this guy will achieve for agriculture in New Zealand”.

For winning the FMG Young Farmer of the Year Athol takes away $80 000 in prizes. 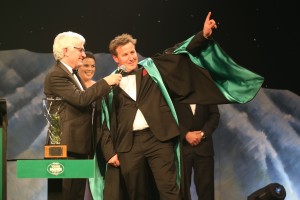 (In recognition of Maori Language Week).

Secret #5: imagine something that gives you joy. Got it? Now go & be like that all day long (Yes. It is that simple…) – ©2016 Brian Andreas – posted with permission.

You can sign up for an email delivering a daily dose of whimsy like this at Story People.

If you feel your value lies in being merely decorative, I fear that someday you might find yourself believing that’s all that you really are. Time erodes all such beauty, but what it cannot diminish is the wonderful workings of your mind: Your humor, your kindness, and your moral courage. These are the things I cherish so in you. – Louise May Alcott.

48 BC Battle of Dyrrhachium: Julius Caesar barely avoided a catastrophic defeat to Pompey in Macedonia.

988 The city of Dublin was founded on the banks of the river Liffey.

1212 The most severe of several early fires of London burns most of the city to the ground.

1499  Portuguese explorer Nicolau Coelho returned to Lisbon, after discovering the sea route to India as a companion of Vasco da Gama.

1584 William I of Orange was assassinated by Balthasar Gérard.

1804  – Emma Smith, Inaugural President of the Women’s Relief Society of The Church of Jesus Christ of Latter-day Saints, was born (d. 1879).

1806 The Vellore Mutiny, the first instance of a mutiny by Indian sepoys against the British East India Company.

1821 The United States took possession of its newly bought territory ofFlorida from Spain.

1850  Millard Fillmore was inaugurated as the 13th President of the United States.

1925 Meher Baba began his silence of 44 years. His followers observeSilence Day on this date in commemoration.

1938  Howard Hughes set a new record by completing a 91 hour flight around the world.

1940 World War II: the Vichy government is established in France.

1941 Jedwabne Pogrom: the massacre of Jewish people living in and near the village of Jedwabne in Poland.

1947  Quaid-i-Azam Muhammad Ali Jinnah was recommended as the first Governor General of Pakistan by then Prime Minister of the United Kingdom, Clement Attlee.

1962  Telstar, the world’s first communications satellite, is launched into orbit.

1973  The Bahamas gained full independence within the Commonwealth of Nations.

1973 – National Assembly of Pakistan passed a resolution on the recognition of Bangladesh.

1976 The Seveso disaster in Italy.

1976   One American and three British mercenaries were executed in Angola following the Luanda Trial.

1978  President Moktar Ould Daddah of Mauritania was ousted in a bloodless coup d’état.

1980 Alexandra Palace burned down for a second time.

1991 Boris Yeltsin began his 5-year term as the first elected President of Russia.

1991  The South African cricket team was readmitted into the International Cricket Council following the end of Apartheid.

1992 In Miami, Florida, former Panamanian leader Manuel Noriega is sentenced to 40 years in prison for drug and racketeering violations.

1997 Scientists reported the findings of the DNA analysis of a Neanderthalskeleton which supported the “out of Africa theory” of human evolutionplacing an “African Eve” at 100,000 to 200,000 years ago.

1998 The Diocese of Dallas agreed to pay $23.4 million to nine former altar boys who claimed they were sexually abused by former priestRudolph Kos.

2000  EADS, the world’s second-largest aerospace group is formed by the merger of Aérospatiale-Matra, DASA, and CASA.

2002  At a Sotheby’s auction, Peter Paul Rubens’ painting The Massacre of the Innocents sold for £49.5million (US$76.2 million) to Lord Thomson.

2003 A bus collided with a truck, fell off a bridge on Tuen Mun Road, Hong Kong, and plunged into the underlying valley, killing 21 people.

2005  Hurricane Dennis slams into the Florida Panhandle, causing billions of dollars in damage.

2006 Pakistan International Flight PK-688 crashes in Multan, Pakistan, shortly after takeoff, killing all 45 people on board.

2008  Former Macedonian Interior Minister Ljube Boškoski is acquitted of all charges by a United Nations Tribunal accusing him of war crimes.

2015 – The opening ceremony for the 2015 Pan American Games took place in Toronto.