Eco, who was perhaps best known for his 1980 work the Name of the Rose, was one of the world’s most revered literary names…

He was the 1992-3 Norton professor at Harvard and taught semiotics at Bologna University and once suggested that writing novels was a mere part-time occupation, saying: “I am a philosopher; I write novels only on the weekends.”

The Name of the Rose was Eco’s first novel but he had been publishing works for more than 20 years beforehand.

He discussed his approach to writing in an interview at a Guardian Live event in London last year. “I don’t know what the reader expects,” he said. “I think that Barbara Cartland writes what the readers expect. I think an author should write what the reader does not expect. The problem is not to ask what they need, but to change them … to produce the kind of reader you want for each story.” . .

Read prophets and those prepared to die for the truth, for as a rule they make many others die with them, often before them, at times instead of them. 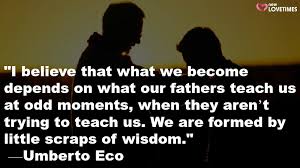 I believe that what we become depends on what our fathers teach us at odd moments, when they aren’t trying to teach us. We are formed by little scraps of wisdom.

This entry was posted on Monday, February 22nd, 2016 at 1:08 pm and is filed under Books, life and death. You can follow any responses to this entry through the RSS 2.0 feed. You can leave a response, or trackback from your own site.