When we set out on a journey we probably don’t think about not returning yet the road toll is a sad tally of people whose journeys ended in death.

I’ve just arrived home an hour later than anticipated because the plane from Wellington to Christchurch was delayed.

That wasn’t all bad as the later start to my 3 1/2 drive south meant the road was quieter than it would have been earlier and the trip down was uneventful.

I am late, but I’m home and grateful for that, and for journeys that end safely.

Over the last few years I have stood in front of many, commentating rural sports in many rural communities in three different countries and feel it’s time to put some perspective into the emotive protests for and against rural activities.

We have just witnessed the SAFE campaign against the dairy industry and through the summer the anti-rodeo campaign gaining media coverage.  As in the case of the SAFE coverage, it’s easy fodder for urban-based journalists to get consumer buy-in and notoriety for their own careers.

I pat on the back anyone who is passionate about what they believe in or against and stand up for it.

I am, however, against sensationalising facts and issues in the pursuit of self-promotion and a win over others at all costs, whether it be the truth or not.

To win an argument one should be more knowledgeable about the facts the opposing side is arguing than they are. . .

Landcorp will not renew its sharemilking contract with Chinese corporate dairy farmers Shanghai Pengxin when it expires at the end of next season.

This brings to an end an arrangement that started in November 2012 when Shanghai Pengxin bought 16 Central North Island dairy farms that belonged to the Crafar family. . .

After many years competing for livestock without compelling suppliers to invest in the full number of shares required in principle, Alliance Group has seized the opportunity offered by Silver Fern Farms’ likely shareholding change to review its capital base.

The uncharitable observer would presume this action is necessary to raise more capital for balance sheet or investment purposes. However Alliance chairman Murray Taggart is adamant this move is all about correcting the imbalance between those suppliers who are fully shared up and those who have made a lesser commitment. The adjustment will take place gradually in line with the rate of supply with deductions of 50 cents per lamb, sheep or calf, $2 per deer and $6 per head of cattle. . .

Has our dairy industry gone too far? – Julian Lee:

We all know the importance of our dairy industry and its existence to our country.

It’s our number one industry — we get that.

But has dairy gone too far in the beautiful Mackenzie Country?

The Mackenzie Basin is a stunning piece of landscape in the South Island — a desert spotted with electric blue lakes surrounded by mountains.

It is the last place you would think you would want to put cows. . .

The company didn’t pay a dividend and has previously said it was investing in infrastructure for future growth. . .

Federated Farmers Meat and Fibre Chair Rick Powdrell is calling for action to be taken to address issues in the marketing of kiwi lamb overseas – particularly in the UK – to prevent our sheep farmers continuing to face low returns.

Speaking at Federated Farmers Meat & Fibre Council in Wellington today, Mr Powdrell said meals featuring lamb had fallen 7% in the UK, while lamb consumption in the US was rising at 10% per year.

Mr Powdrell has just returned from the American Sheep Industry Conference in Scottsdale, Arizona, where he had seen first-hand some of the initiatives that are underpinning this growth. . .

It’s a sign of how worried we were that a drop of 2.8% in this morning’s GlobalDairyTrade auction has been greeted with relief. 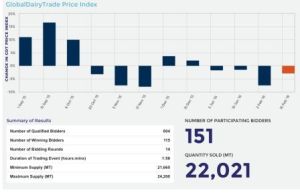 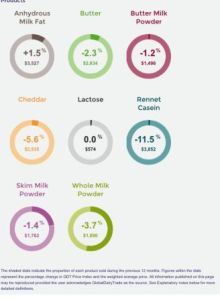 1873 The editor of the Daily Southern Cross, David Luckie, published a hoax report of a Russian invasion of Auckland by the cruiser Kaskowiski(cask of whisky).

1996 – NASA’s Discovery Programme started as the NEAR Shoemakerspacecraft lifted off on the first mission ever to orbit and land upon an asteroid, 433 Eros.

2011 – Libyan protests began. In Bahrain, security forces launched a deadly Pre-dawn raid on protesters in Pearl Roundabout in Manama, on what is known as Bloody Thursday.