Crepitant – having or making a crackling sound; denoting a fine bubbling noise; rale produced by air entering fluid in lung tissue, heard in pneumonia and in certain other conditions.

The GloabalDairyTrade pice index reclaimed some lost ground in this morning’s auction with prices increasing by 3.6%. 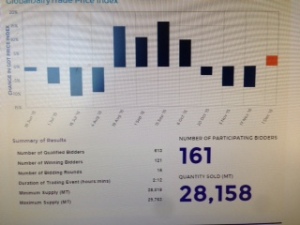 Whole milk which is the most important for the farm gate price increased by 5.3%.

Good teachers make the best of a pupil’s means; great teachers foresee a pupil’s ends. – Maria Callas who was born on this day in 1923.